On the eve of her most personal exhibition, Minneapolis-based artist Leslie Barlow feels nervous to speak in front of the camera. She usually tells stories through colors, expressions, and portraits, not words. 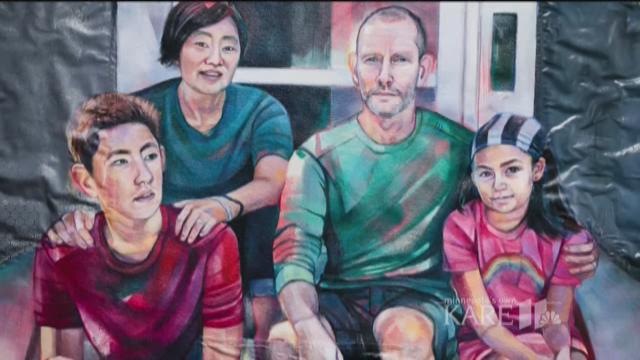 MINNEAPOLIS – On the eve of her most personal exhibition, Minneapolis-based artist Leslie Barlow feels nervous to speak in front of the camera. She usually tells stories through colors, expressions, and portraits, not words.

She talks about the first time painting an interracial couple—her parents.

“They've had experiences where they've been pulled over and my mom was questioned if she was ok, if she was safe being with my dad,” said Barlow.

She is the daughter of a mostly black father and white mother.

Eighteen months ago she received a public grant from the Minnesota State Arts Board for a special project, and the idea struck.

The famous case was also turned into the film “Loving,” which is up for Best Actress in a Leading Role at the Academy Awards this weekend.

“What I’m trying to do is normalize these narratives and this imagery. These are people in their homes and their spaces just doing their normal thing, and that's what's really exciting about these paintings. But what you need to know is that these images can be polarizing,” said Barlow.

The curator of the exhibition, Tricia Heuring, is also of mixed race. Her mother is from Thailand, and her father is a white man from Minnesota.

As a gatekeeping of art, she was honored to put up these pieces.

“Leslie is painting very traditionally, as an oil painter and painting portraits, which is a traditional art form,” said Heuring. “But she is painting families that represent a modern reality.”

For more information in the Loving exhibition, visit http://publicfunctionary.org/now