GOLDEN VALLEY, Minn. - Ronda Rousey. She's fierce.  She's tough. On Tuesday, however, she bared her soul and made a heartbreaking admission on The Ellen Show. 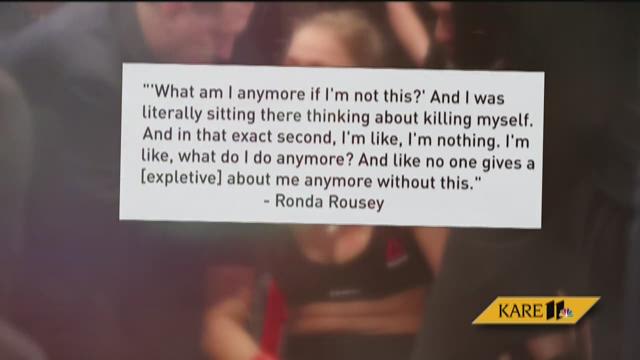 On Tuesday, however, she bared her soul and made a heartbreaking admission on The Ellen DeGeneres Show.

Rousey told Ellen she thought about killing herself after that huge knockout loss to Holly Holm in November, her first loss since joining UFC.

Social media lit up following the confession. Some against her. Many is support of her emotional admission.

"Honestly, my thought in the medical room, I was sitting in the corner and was like, `What am I anymore if I'm not this?'" Rousey said. "Literally sitting there thinking about killing myself. In that exact second, I'm like: `I'm nothing. What do I do anymore?"

Rousey told DeGeneres that her relationship with UFC heavyweight Travis Browne helped get her through.

"I looked up and saw my man, Travis, was standing there," Rousey said. "I'm looking up at him and was just like: `I need to have his babies. I need to stay alive.'"

“What we think about our experiences are very powerful and she interpreted, obviously, that experience to mean she was nothing, that she had no purpose,” said Anderson. “Her purpose was to fight and to win. And if you are not going to win, what is your purpose? And we as humans, without a purpose, it’s hard to know what we are doing here.”

Since her loss, Rousey has hosted Saturday Night Live on NBC and posed for the cover of the Sports Illustrated Swimsuit Issue. Not a bad consolation prize after losing a title fight.