Some members of the Minnesota tech community expressed outrage at the poll. 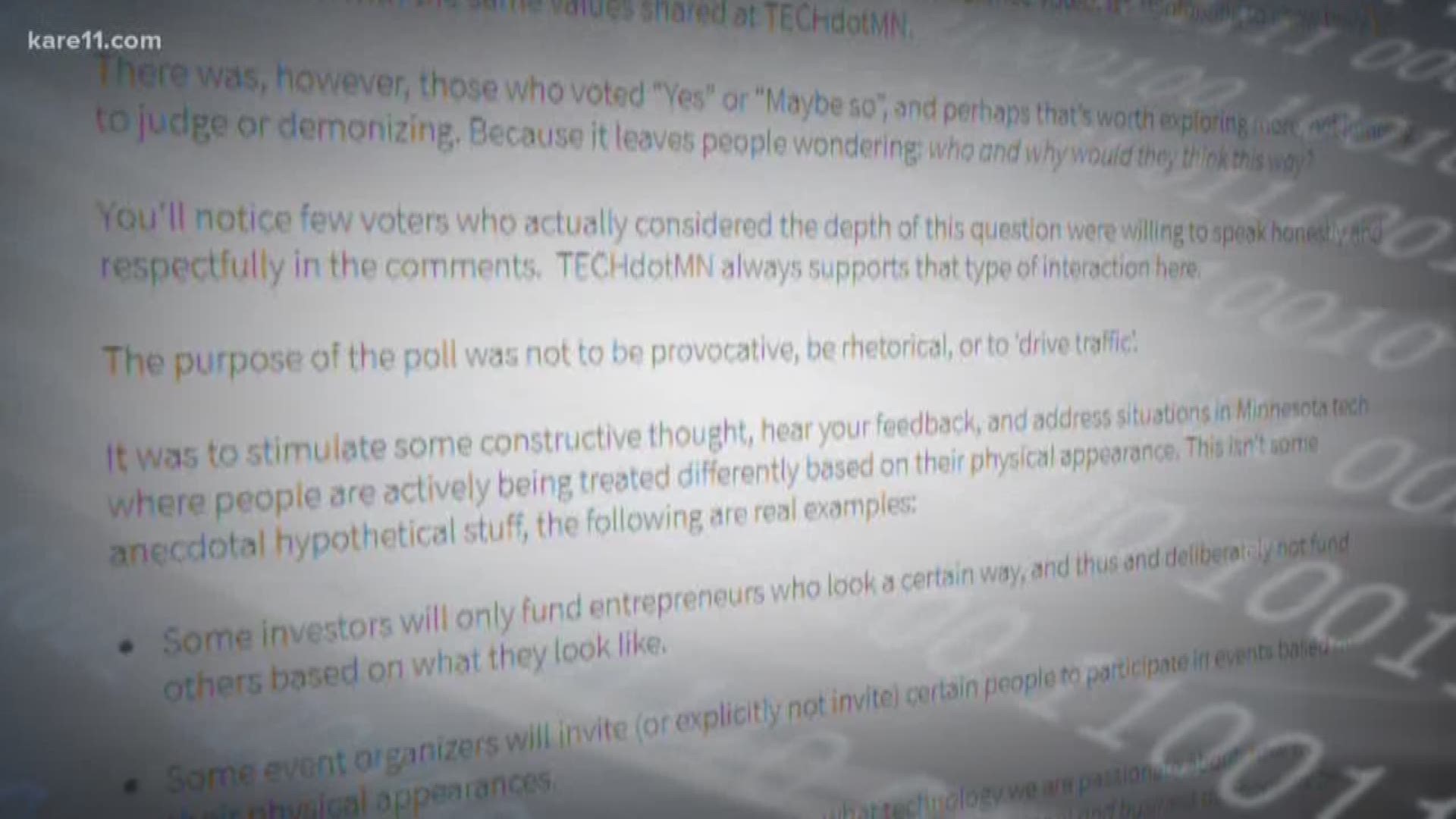 On Sept. 19, Tech.MN asked its readers, "Should Minnesota techies be treated differently based on their appearance?"

“The purpose of the poll was not to be provocative, be rhetorical, or to ‘drive traffic.'

It was to stimulate some constructive thought, hear your feedback, and address situations in Minnesota tech where people are actively being treated differently based on their physical appearance. This isn’t some anecdotal hypothetical stuff, the following are real examples:

On its website, tech.mn calls itself "a passionately committed group of technology enthusiasts with complementary interests, experience and domain knowledge." The author of the article declined to talk to KARE 11 for this story.

He also writes “some investors will only fund entrepreneurs who look a certain and this deliberately not fund others based on what they look like. Some event organizers will invite or explicitly not invite certain people to participate in events based on their physical appearances. Some businesses have pulled their partnerships the tech site.”

By contrast, some members of the Minnesota tech community expressed outrage. Some calling the article "garbage" and saying the author is trying to create a narrative that opposes tech and business initiatives that serve women and people of color.

We talked to people from the tech industry - two men and two women - who are passionate about diverse workplaces.

Jeff Lin, founder and CEO of Bust Out Solutions, said he will no longer partner with the website behind the article. He said he also believes diversity of ideas will lead to better products and service.

Caroline Karanja, whose company measures the impact of diversity initiatives, added "appearance" is something we can easily read.

"That is implying this particular dimension of diversity. It leaves out the fact that especially in tech, the way that women and people of color are treated is different," she said. "Without acknowledging that their is a past in which women and women of color have been erased ... is to not acknowledge the history and the contributions those people brought to the table."

Indeed, there have been a growing number of initiatives to attract diverse voices to the table.

Next month, the Metropolitan Economic Development Association and the City of Saint Paul will host a competition modeled on the television show "Shark Tank." The Meda $1 Million Dollar Challenge for Minority Entrepreneurs will attract minority entrepreneurs from around the nation.

In October, the Twin Cities will host the first national conference aimed at increasing the number of black men and women in technology jobs. The conference, BITCON, is normally held in Silicon Valley.