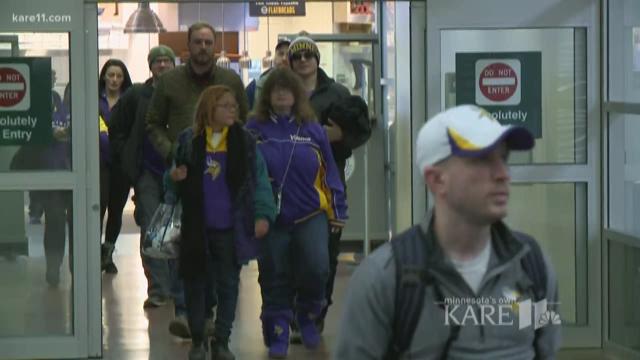 MINNEAPOLIS - It was a sad and quiet Monday morning at Minneapolis-St. Paul International Airport as Vikings fan returned from Philadelphia.

First @Vikings fans arriving home to MSP from Philly. They say it was a sad and quiet plane ride. pic.twitter.com/zvEOJ1p2sU

Some fans automatically talked about how hopeful they are for next season, but most fans were still processing the blowout game.

"It's a damper on everything, not interested in going to the Super Bowl anymore," one fan said. "We'll watch it and see the commercials"

Many fans also told KARE 11 they were shocked at how Eagles fans treated them. While they said some were nice, fans shared that most were not and some situations turned violent.

The return to Minnesota was not much better for Vikings players and personnel. They arrived early Monday morning to a quiet Winter Park.

It was a quiet morning as the #Vikings returned to Winter Park from Philly. pic.twitter.com/7jo39ojlmo