The artist behind the sculpture says he did it so we can all have something positive to talk about in 2021. 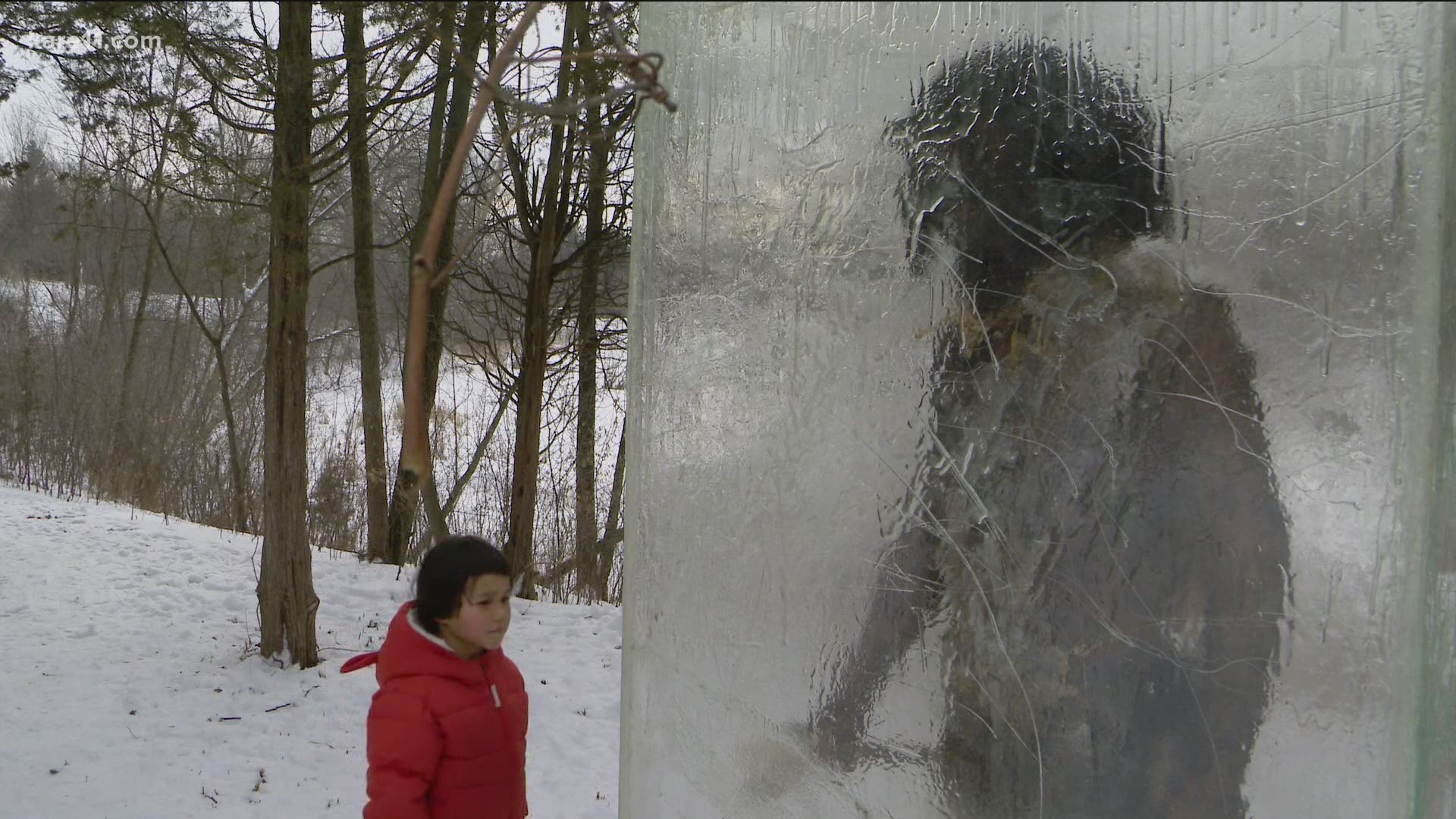 MINNEAPOLIS — Spend enough time out in nature and you just might stumble onto something incredulous.

Like a caveman frozen in time, standing by a trail at Theo Wirth.

"Every person we've talked to, they said they came to the park to specifically find this piece," artist Zach Schumack said.

"It's Wirth park, which is our neighborhood park, and I was like we gotta find it," Genevieve Johnson said. "He was out there for hours. I was tracking to find him on my phone."

After searching for three days, Johnson and her husband said they were happy to have finally come across a seemingly spontaneous piece of art.

Schumack, who is one of the artists who worked on the piece said he and his art collective, Leonic, built Zug Zug the caveman as a commissioned piece. Originally it was for an ad agency--Hunt Adkins and Agency 222.

When they were done with him, Schumack said he couldn't just let him sit in his garage.

Plus, the timing just seemed right to release Zug Zug into the world.

"Every time we turned on the TV and looked at our cellphone, it was really only one story going on, and it just seemed a little divisive and negative," Schumack said. "We decided to use this piece to give people something else to talk about, and also something to explore and look at, besides what's going on with our TVs and phones."

So with the blessing of the Minneapolis Park and Recreation board, Schumack lugged Zug Zug to Theo Wirth.

The intended effect definitely took place. More people came to see Zug Zug than Schumack and the team ever could have imagined. People took photos. Touched the sculpture to see if Zug Zug was sitting in real ice. All of it, instilling a sense of wonder. Schumack said that's his favorite part, especially when kids find it mind-blowing.

"Talking to a little kid a little bit ago, and he found out that it wasn't an actual real caveman," Schumack said. "He was like, 'wait what? it's not real?' and you could see the look of a blown mind. I think that's what art is supposed to do. It's supposed to make you wonder, guess and talk about it."

The caveman himself used to be a mannequin from a Burnsville mall. He said his artist partner Ian spent a lot of time researching to make sure Zug Zug was wearing all the things that were accurate for his time.

As for the "ice," Schumack explained that it's a mix of plexiglass and delicate epoxy work. He said he looked at an ice cube every night to perfectly mimic ice melting.

"It's been a big debate online," Schumack said. "It's not CGI graphics. Someone was commenting about that. It's definitely all handmade by me."

He added that the epoxy was made opaque on purpose.

"This piece was designed, even a year ago, to draw you in closer to really get you kind of engage with the piece, and look for areas of clarity to see everything," he explained.

By now, with Zug Zug having gained quite a social media following, a game of 'go find the caveman' has turned into a nice moment outside.

All this, leaving the artist and the gallery feeling fulfilled.

"We want to make sure that this is continuing to get people into the parks and into nature, and engaging with nature and with art, and that's really the whole point in all of this," Schumack said.

As for what's next, Schumack said Zug Zug's companion Zarah is somewhere in a Minnesota park. He said he could not give us any more details or clues about Zarah, because again, the fun is in finding her.

OTHER NEWS: Plenty of change for the Wild when they open season on Thursday