What happened to a college professor at St. John's that changed his life forever and what he hopes students can learn from it. 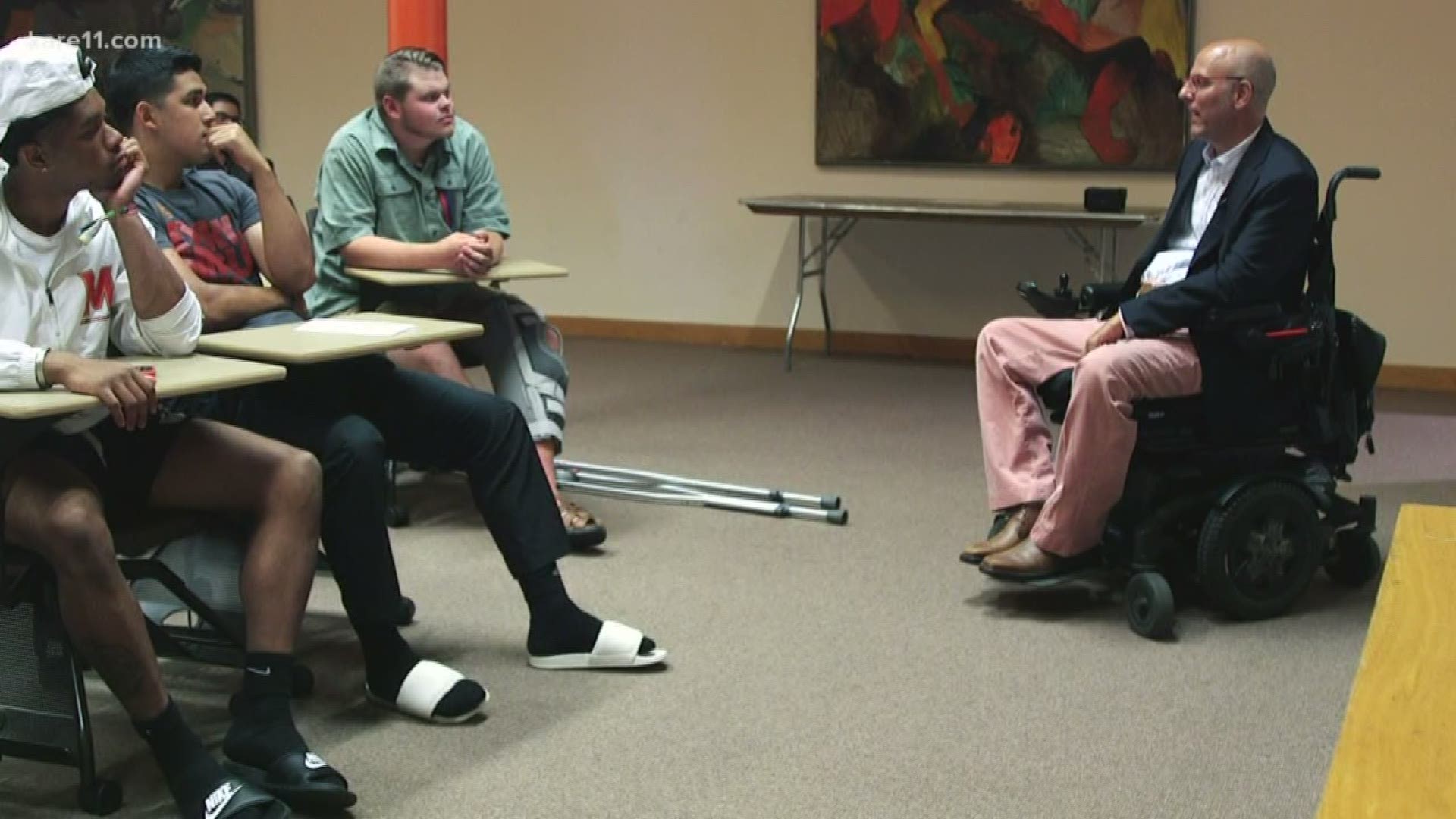 COLLEGEVILLE, Minn — If experience is the best teacher, Bob Bell hopes college freshmen will learn from his.

Exactly three decades ago, Bell was a new student at St. John's University, the start of what he thought would be the greatest year of his life.

“I had never seen snow, never owned a real jacket or a pair of gloves,” said Bell, recalling his visit as a high school senior in 1989. “And it was almost one of those things. Love at first sight.”

But college was not like Bob expected. In just two months on campus, he'd been in so much trouble St. John's said it was kicking him out.

And then, the night before Thanksgiving break, Bob and his friends were roughhousing in the hall of their dorm when a classmate put him in a wrestling hold and they suddenly heard three sharp pops as his vertebrae snapped. He would never walk again.

“The first thing I said was, ‘No one touch me, this is serious,’” said Bell. “Then I said someone call 911, which when those words come out of your mouth, you can't believe you're saying it about yourself. And then the third thing I said was, 'I forgive you.'"

I forgive you. Three words that thirty years later Bob says he still can't believe came to mind at that moment, and words he says set the course of his life.

“I knew it was the right thing to do, and I am as proud of it today as I was five minutes after I said it then,” said Bell. “It's made my life easier, it's made my journey easier to not harbor those feelings, and yeah, people look at it as a good example.”

But being an example didn't come easily. After his injury, Bob spent months in rehab where he thought often of suicide, but decided he not only wanted to live, he wanted an extraordinary life.

“I made some life choices of who I wanted to be, how I wanted my friends and family to see me, what I wanted to accomplish,” said Bell. “And the first goal I set was to come back to (The College of St. Benedict) and St. John’s.”

Bob did come back, graduated just a year behind his class, and then finished law school at the University of Minnesota. He went on to work for the Securities and Exchange Commission and for a firm on Wall Street, all while visiting more than 50 countries.

But through it all one place was always on his mind and three years ago, Bob moved back to the St. John's dorms, where he's now a resident advisor to 65 college freshmen, giving students what he calls "pearls of wisdom," life lessons he wishes he'd known at their age.

“Lord knows I made just about every mistake they could even consider making,” said Bell. “So even before they ever make it I can try to head them off at the pass. It’s not easy to live with sixty-five 18-year-old young men. But I'm choosing to do it.”

He's also choosing to live the principles he's trying to teach his students: Grace. Tenacity. Service. And using each day to make himself and others a little better.

“Every day is difficult,” said Bell. “It takes me close to two hours to get out of bed, and hour at night, and some of it is humiliating or degrading or painful. But that causes you every day to think about making it worth it, making the effort worth it. It’s amazing. It really is.”