The Get Down Coffee Co.: Bolstering business, community and specialty coffee in North Minneapolis

The coffee shop will be coming to the Camden neighborhood in North Minneapolis next year - but it's just one part of a larger vision. 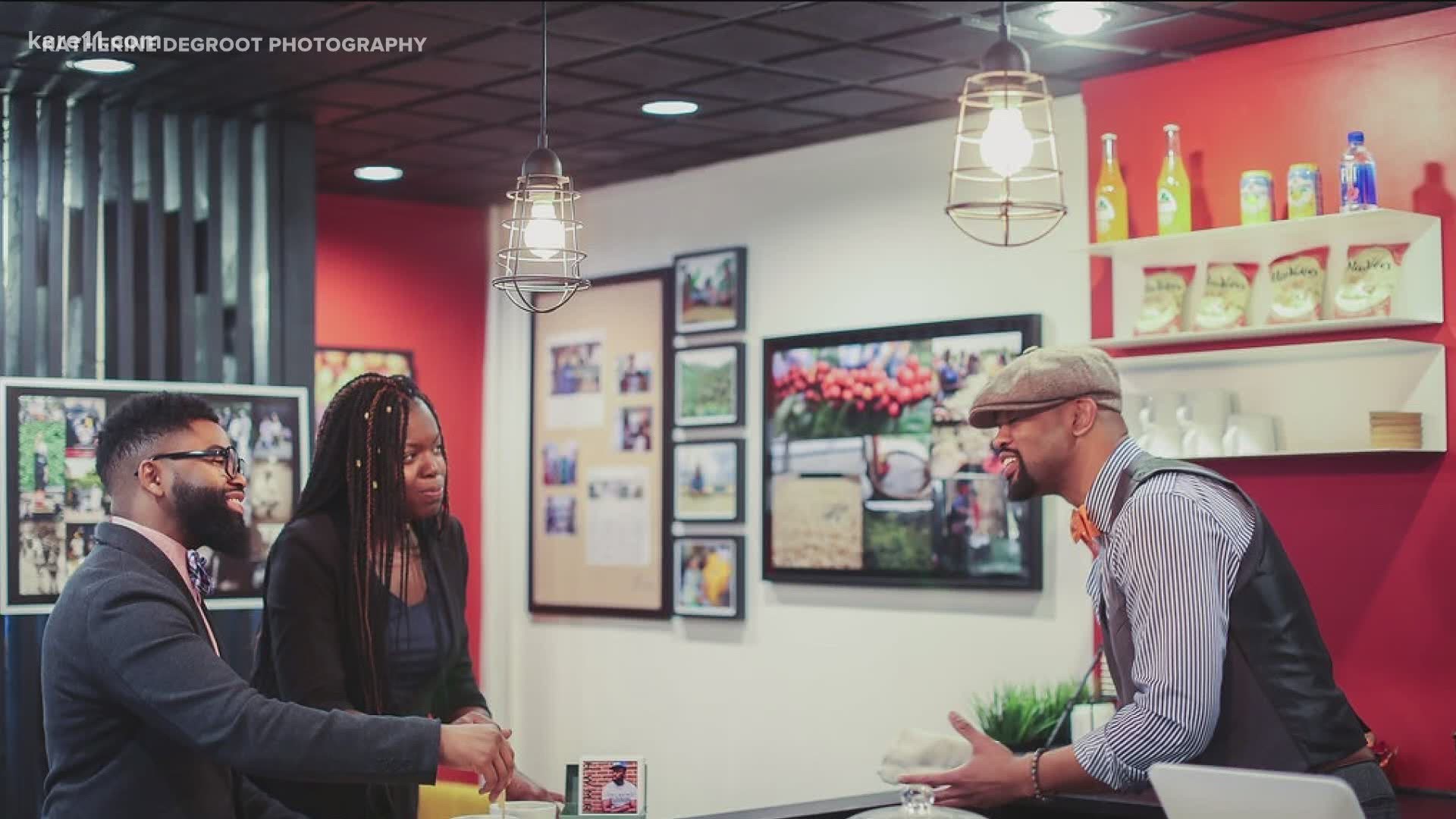 MINNEAPOLIS — Learn more about The Get Down Coffee Co. and support their fundraising campaign here.

Houston White was in his 30s when he really tried coffee for the first time.

He had never liked it as a kid. But when he tried it at an Atlanta restaurant with some friends, it wasn't as bad as he remembered it.

Like most things the entrepreneur, designer and real estate developer approaches, he went immediately all-in.

"It became an obsession for me," he said.

He wanted to learn, but found the specialty coffee world to be a bit "snooty" toward a novice. Then, he called up Dan Anderson, owner of Dogwood Coffee in Minneapolis. The two of them began a journey that five years later led to a new dream: The Get Down Coffee Co.

He and Anderson had talked about a partnership, where Dogwood would start a cafe in the new development.

Then George Floyd was killed by a white Minneapolis police officer. Anderson and White processed what they were feeling one day over a round of golf.

"Moving forward you can't be unaffected," Anderson said, thinking back on those days after Floyd's death. "You can't be unchanged. And you realize like, you know, there's things you're just complicit in, even if you're not intentionally doing that."

Over golf that day, Anderson said he wanted to do more.

White told Anderson about what he saw as a lack of capital in the Twin Cities' Black community. He wasn't just talking about money, though. He was talking about relational capital. Business connections. The things that come with privilege.

As White spoke, Anderson thought of all the resources that had allowed him to build Dogwood.

"Part of his voice was like, well, if you have that, it's not that it's necessarily something to be ashamed of," Anderson said. "You've built a business system. ... How do you now lend that to people who don't have that same opportunity as easily?"

White and Anderson decided to form a brand-new collaboration: The Get Down Coffee Co.

"We could create this cultural collision to tackle some of these very hard discussions and some of these inequities in a creative way," White said. "The Get Down formed as a way to deal with some of the social trauma, but also as a way to creatively build a solution that could sustain."

The idea was not just about a coffee shop. It was about building sustainable business, jobs and community.

"The idea is that North Minneapolis needs to make things, right?" White said. "We need to have sustainable enterprise that brings people from all over the city to North to enjoy, to celebrate and to spend money."

Credit: Katherine DeGroot Photography
Houston White first got into coffee in his 30s - but he quickly became obsessed.

One of White's core values is this: Human connection is the most powerful force in nature. He believes in the power of "cultural collision" - that we are better when we learn from one another.

"It took a lot of different people pouring into me to make me who I am today," he said. "I believe people lack when they don't get outside of their tribe, their community, and folks who see the world exactly as they see it. I think this notion of collision makes us all better."

The Get Down Coffee Co. is just one part of a bigger dream White calls Camdentown.

"I want to help build a neighborhood that self-sustain and that has industry," White said.

White envisions a bustling business community on 44th Avenue between Penn and Lyndale, in the Camden neighborhood of North Minneapolis.

"If you think about the uniqueness of 44th Avenue, the only major thoroughfare that borders a parkway is Grand and Summit," he said. "So this is literally Grand and Summit potential in North Minneapolis."

White is thinking 30 years out.

It's not just about a coffee shop and handful of barista jobs.

"What's even more important to me is an industrious kind of space that makes things and that provides jobs that have a lot more bandwidth and growth potential," White said.

White wants to help people see themselves as part of a team - a team that brings something from a bean, to a flavor profile, to a bag, to shipping, to a neighborhood industry.

Anderson knows exactly what this is about. It's what he and his staff members experience every day. It's what drew him to coffee in the first place.

"A neat thing about it is the care and concern and precision that goes into this product and really this desire to make it as tasty and amazing as possible," he said. "There are so many things that have to go right that we often all take for granted to make that really delicious cup of coffee that's naturally sweet and can lend these really nuanced flavors."

Credit: Dan Anderson
Dan Anderson, owner of Dogwood Coffee, and his family visit the Andrade family. Dogwood buys all the coffee from this producer.

And it's not just that - it's the knowledge that they are building symbiotic relationships with coffee growers all over the world. And for Anderson, it's the spaces that his coffee shops create to welcome people in and provide hospitality.

Credit: Katherine DeGroot Photography
Houston White is starting The Get Down Coffee Co. in North Minneapolis.

Anderson has already seen White create this kind of space at HWMR.

"Life just flows out of him and he's so relational and just everyone who comes through the door, there's just this high energy," Anderson said. "So I'm excited to see, with his vision and leadership, to see the kind of space he creates within coffee."

White plans to expand HWMR in spring or summer of 2021. That expansion, at the same location in Camden, will include the brand new Get Down Coffee Co.

Dogwood will act as a "sibling" coffee shop, offering a roasting facility, training, connections with vendors, and sourcing beans.

The two-year plan is for Get Down to branch out from Dogwood's roasting facility, and build its own. That will exist as part of the Camdentown Flats, a mixed-use building with townhomes, space for community and budding entrepreneurs.

"I believe what is at the root cause of the disparities that exist in the state is a lack of community," White said. "It's not the weather. Because Chicago's cold, and they have a thriving Black community."

"It is just this lack of seeing oneself thrive, be prosperous," he said. "When you start talking about the Black community in Minnesota, the lack of a geography that really represents and that understands that subset and provides hope is, in my opinion, tied right to this disparity. All of them. The income, the education, the jobs and the generational wealth piece. And so that's really what this is about, to try to be a catalyst to create that type of a neighborhood."

To learn more about The Get Down Coffee Co. and support the construction project, check out the indiegogo page.

RELATED: North Minneapolis barber is a catalyst on his corner

RELATED: 'Be the Change': A golfing event to benefit the community

PHOTOS: Houston White to open The Get Down Coffee Co. in North Minneapolis

1 / 13
Katherine DeGroot Photography
Houston White is starting The Get Down Coffee Co. in North Minneapolis.