"Sometimes when really terrible things happen, some bright things come out of it," said Susan Tuck, co-founder of Pedal Power. 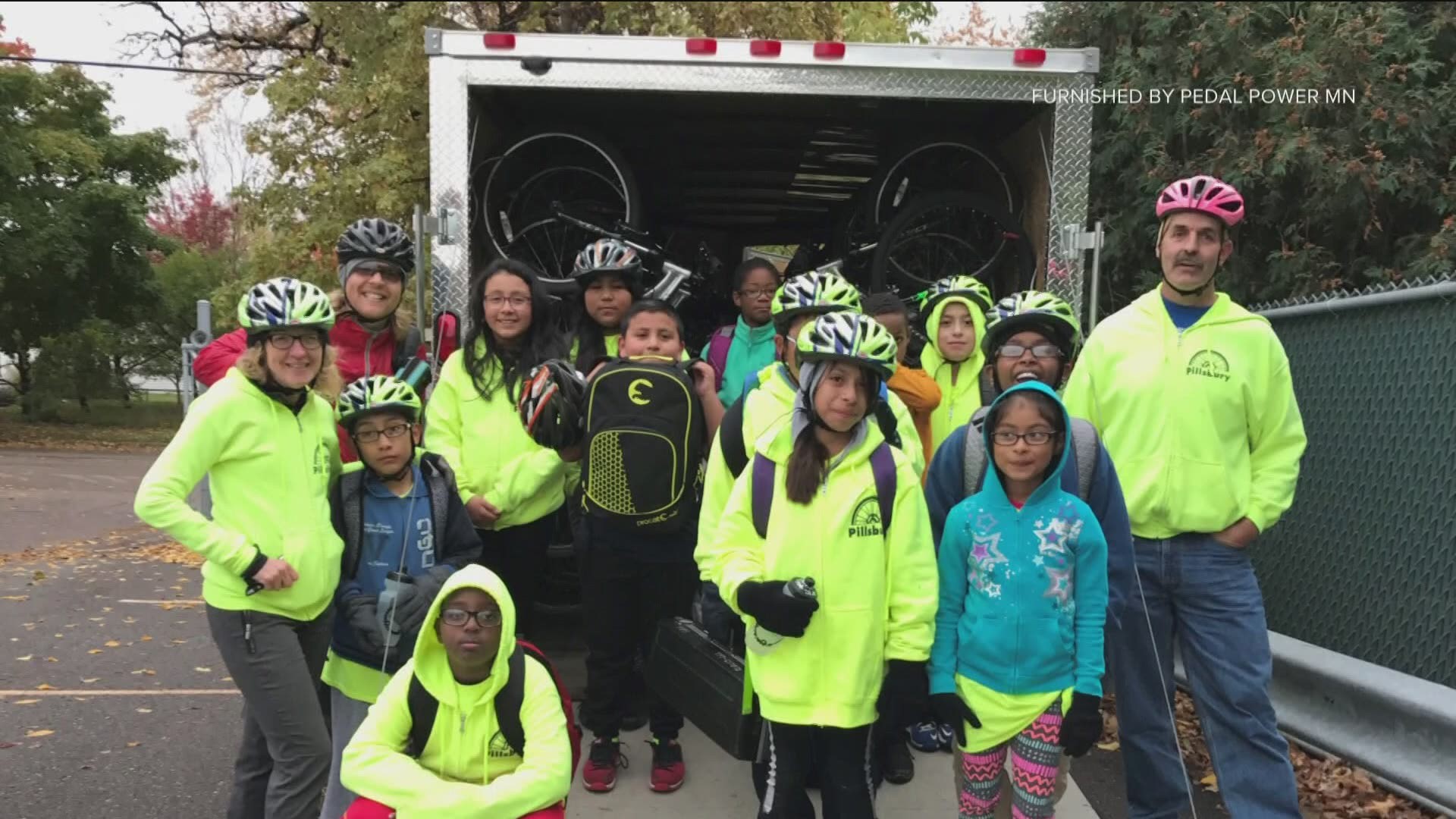 MINNEAPOLIS, Minnesota — A Minneapolis nonprofit has seen an outpouring of support after thieves stole from them.

Pedal Power MN teaches fourth and fifth graders in northeast Minneapolis how to ride a bike and then they explore the city together.

But last week, thieves stole the nonprofit's unmarked trailer with 30 bikes inside of it from Pillsbury Elementary School's parking lot.

Someone had called police on Nov. 19 around 10:20 p.m. to report males trying to break into a trailer near 22nd and Garfield Street NE.

"I drove over there at 7 o'clock this morning and it was gone. The 30 bikes and the trailer and all. So we're devastated," Mark Trumper, co-founder of Pedal Power, told KARE 11 last Friday.

Trumper started Pedal Power with Susan Tuck back in 2012. The former Pillsbury School teachers (now retired) noticed about a third of their fourth and fifth graders did not know how to ride a bike. So they started teaching them. After learning how to ride a bike, they then bike to learn in their city.

A big part of their mission is to make biking more equitable.

"We know that people of color and kids of color especially don't get as much access to our green spaces," Trumper said. "We just have found that if we take kids there, kids take their families there which is really neat."

Pedal Power bikes all around the city, no matter the weather.

"There's that old saying, 'It's not bad weather, it's just bad clothing.' So we try to provide a lot of the cold weather and outdoor gear that the kids might need that might prevent them from knowing how to dress and to prepare for getting outside all the time," Tuck said.

While the program had been put on hold due to the pandemic, they had just gotten a second trailer in the spring to keep expanding. They currently work with Pillsbury and Webster Elementary.

Trumper said it took years to build up their fleet of bikes.

"We've always been on a shoestring, cobbling things together, and we really want to expand and reach all the kids in the whole northeast part of the city," Trumper said.

But as news spread about the theft, so did the support.

"I saw it on the news... I was just really upset by it," said Kelly Reisdorf, chief investor relations and communications officer for Vista Outdoor.

The outdoor gear company is headquartered in Anoka. Reisdorf contacted her CEO about the nonprofit.

"We said, 'Hey, we have a shared mission here and there's a lot we can do to help them,'" Reisdorf recalled.

Pedal Power has a fundraising goal of $50,000 through GiveMN. To help the nonprofit meet its goal, Vista Outdoor is donating $30,000, along with bike equipment like helmets and bike pumps from the brands Bell, Blackburn and CamelBak.

Specialized Bicycle Components just announced they plan to donate bikes to Pedal Power. According to the company, the plan is to provide some of the 26/ 29in bikes that they have in stock based on their needs and then reconnect in the spring when they get some 24in bikes back in stock.

"The program is a living, breathing example of what we believe in. They're bringing the joy and freedom of cycling to students who wouldn't previously have had that opportunity. Minneapolis is lucky to have a program like this in their city," said Janet Brazil with Specialized Bicycle Components.

According to Trumper, they also received a call today that UCare wants to send them a check for $7,500.

On top of that, more than 230 individual donations have helped raise nearly $20,000 through the GiveMN website.

"People that learn to ride a bike when they're a kid, they just remember that joy. I get to do that and I get to see kids ride a bike for the first time ever probably 20 times a year or more and it's just so wonderful," Trumper said.

Tuck added, "Sometimes when really terrible things happen, some bright things come out of it. We've seen so much beautiful outreach and we just couldn't be more grateful for all of the support that we're getting."

Pedal Power plans to resume programming in the spring.

The Minneapolis Police Department is investigating the theft. According to spokesperson John Elder, MPD has included its law enforcement partners in this case and a search is being conducted both inside and outside of Minneapolis.

Anyone with information is encouraged to call CrimeStoppers at 1-800-222-TIPS (8477). Tips may be submitted electronically at www.CrimeStoppersMN.org. All tips are anonymous and persons providing information leading to an arrest and conviction may be eligible for a financial reward.