Tire removed from Colorado elk's neck after more than 2 years

Wildlife officials had been trying to locate and free the elk for more than two years. The tire was full of wet pine needles and dirt. 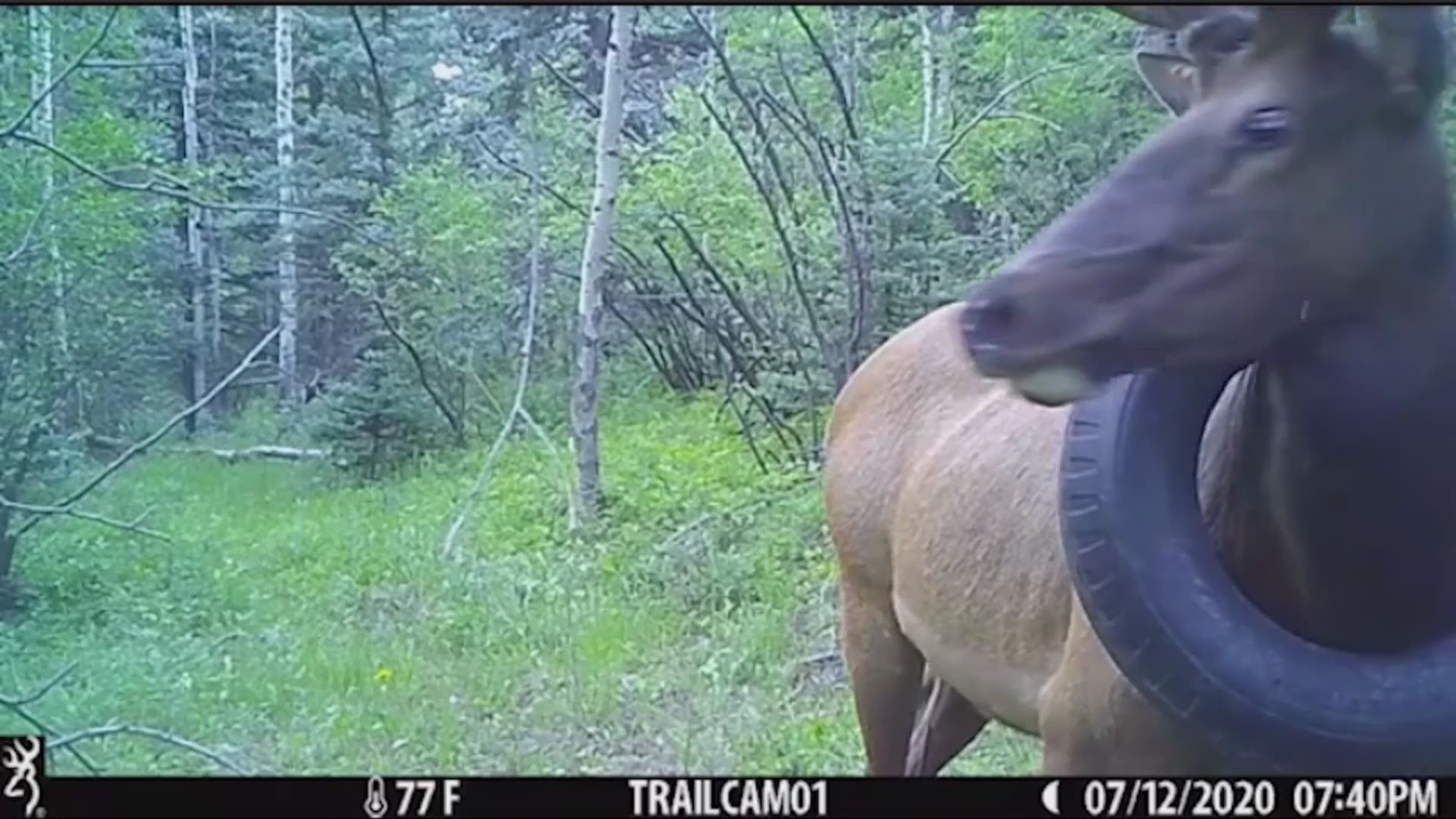 PINE, Colorado — An elk with a tire around its neck for at least the past two years has been finally freed of the obstacle.

Colorado Parks and Wildlife (CPW) officers were able to tranquilize the bull and remove the tire on Saturday.

Officers had to cut the antlers off the bull elk in order to remove the tire. The elk was located on private property about one mile south of Pine Junction off of County Road 26.

CPW estimated that the bull elk dropped roughly 35 pounds between the removal of the tire, his antlers and the debris that was inside the tire.

“The tire was full of wet pine needles and dirt,” said Scott Murdock, CPW officer. “So the pine needles, dirt and other debris basically filled the entire bottom half of the tire. There was probably 10 pounds of debris in the tire.”

Once the tire was off, wildlife officers were surprised to see the condition of its neck after having that tire on it for more than two years.

“The hair was rubbed off a little bit, there was one small open wound maybe the size of a nickel or quarter, but other than that it looked really good,” Murdoch said of the bull’s neck. “I was actually quite shocked to see how good it looked.”

Wildlife officers aged the bull as a 4 1/2-year-old, weighing more than 600 pounds. It had five points on each of its antler beams.

“It was tight removing it,” Murdoch said of pulling the tire off the bull’s neck, even after cutting its antlers off. “It was not easy for sure, we had to move it just right to get it off because we weren’t able to cut the steel in the bead of the tire. Fortunately, the bull’s neck still had a little room to move. We would have preferred to cut the tire and leave the antlers for his rutting activity, but the situation was dynamic, and we had to just get the tire off in any way possible."

RELATED: Elk has been living with tire around neck for more than a year

The elk was first seen with the tire in July 2019 by officers conducting a population survey for Rocky Mountain bighorn sheep and mountain goats in the Mount Evans Wilderness, according to CPW. At the time, the bull appeared to be a younger one, likely 2 years old.

Credit: Jared Lamb/CPW
The first sighting of this bull with the tire around its neck was from wildlife officer Jared Lamb in July 2019 during a survey for bighorn sheep and mountain goats.

The elk was also sighted by a trail camera near Conifer, which picked up the bull with the tire twice in 2020, and another trail camera on Aug. 12, 2020.

At the end of May and into June 2021, four attempts were made to catch up with this bull in the Pleasant Park area of Conifer. Sightings of him picked back up in September and early October near the town of Pine.

CPW said this bull elk spent the past couple of years traveling back and forth between Park and Jefferson counties. He would disappear for long periods of time, particularly in the winter, and was acting as expected from a wild animal, not wanting to be around human presence.

“In the winter, we weren’t getting any reports of him,” Murdoch said. “In the springtime, we would get an occasional report or see him in a little bachelor herd. The rut definitely made him more visible. There was a bigger bull in the group he was with on Saturday, but he is getting to be a decent size bull.”

Credit: CPW
The bull elk with the tire on it.

CPW said the saga of the bull elk highlights the need for residents to live responsibly with wildlife in mind. That includes keeping your property free of obstacles that wildlife can get tangled in or injured by.

This elk would have gotten the tire around its antlers either when it was very young, before it had antlers, or during the winter when it shed its antlers.

CPW recommends that if you see wildlife entangled in something or with debris wrapped around it, that you report it immediately to wildlife officials. That can be accomplished by calling CPW’s Denver office at 303-291-7227.

RELATED: Elk has been living with tire around neck for more than a year

We have received sighting reports of the bull elk with a tire around its neck, including this video taken Wednesday night by Rod Riddle near Pine Junction. The first sighting we had of this elk with this tire on it was back in July 2019. pic.twitter.com/C2hHZImyQ5

> Top stories curated daily just for you! Sign up for the 9NEWSLETTER to get can’t-miss stories, Next and Broncos content, weather and more delivered right to your inbox.

MORE WAYS TO GET 9NEWS

HOW TO ADD THE 9NEWS APP TO YOUR STREAMING DEVICE

ROKU: add the channel from the ROKU store or by searching for KUSA.

For both Apple TV and Fire TV, search for "9news" to find the free app to add to your account. Another option for Fire TV is to have the app delivered directly to your Fire TV through Amazon.