Curbside delivery: Baby named after officer who helped bring her into the world

Lacey Gonzalez and her husband had just pulled up at Hennepin County Medical Center on March 8 when suddenly Lacey knew her fourth child was on her own schedule. 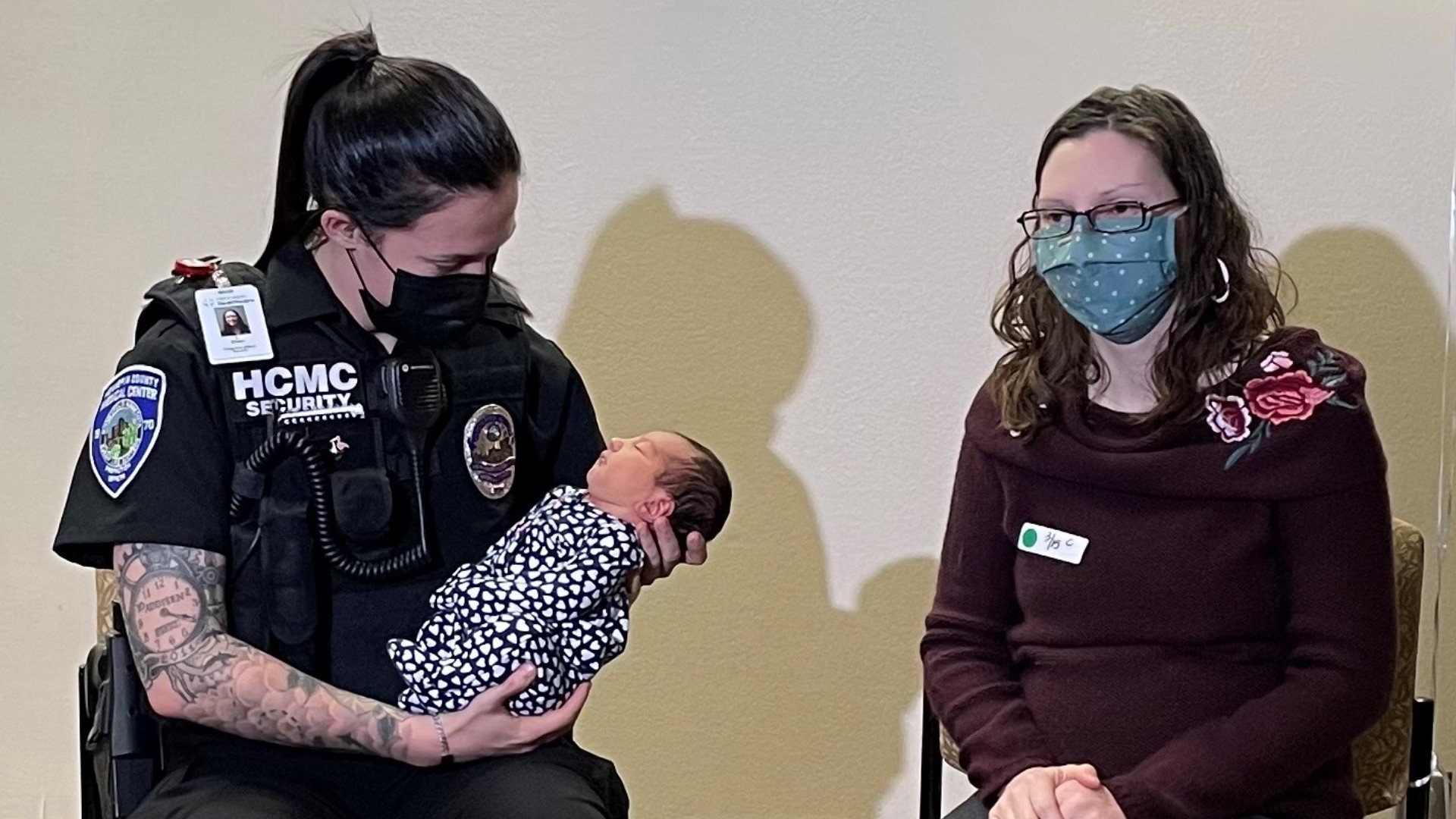 MINNEAPOLIS — Curbside delivery has become kind of a big deal during the COVID pandemic for getting food to go with little contact.

But at Hennepin Healthcare (HH) last week, curbside delivery got a much different spin, involving a very pregnant mom and a baby who refused to wait.

Lacey Gonzalez and her husband had just pulled up at Hennepin County Medical Center on March 8 when suddenly Lacey knew her fourth child was on her own schedule.

"It turns out she was so excited to come into the world that we couldn't quite make it through the emergency room doors," Lacey explained during a news conference Monday at Hennepin Healthcare.

Knowing things were imminent, Lacey's husband Luis ran inside for help and encountered HCMC security officer Tiffany Owen. Owen ran outside and found the delivering mom inside the family van, with the little girl's head already partially out.

"I went into my mom mode, professional mode, was trained for this kind of stuff, just telling her to keep breathing, it was gonna be OK, keep pushing," recalled Owen after admitting this was her first experience with a delivery other than having her own daughter. "I was by myself for what seemed like an eternity but it was just a minute or two."

Lacey insists she had no doubts she was in safe hands. "She came to the rescue," she said, speaking of Officer Owen's steady presence. "The whole time I kept looking at her eyes. All I could see was courage and I knew everything was going to be OK."

Owen recalls finishing the delivery and holding the baby before placing her on her mother's chest. Once a medical team arrived, father Luis cut the baby's umbilical cord and the family was whisked away to the ER and then to the Birth Center. Eventually, Owen was taken upstairs for a reunion and was told the baby had been named after her. According to one translation, Tiffany means "manifestation from God."

"One of the most amazing moments of my life," Owen said. "Still trying to understand what happened a week ago."

Credit: KARE
In one translation, Tiffany means "manifestation from God," which the family thought was fitting.

There are many details and moments for Tiffany Owen to assemble in the coming days but the bottom line is actually quite simple: A situation that could have escalated to crisis mode was handled with calm resolve, in a manner that left an expectant mother filled with confidence and eventually... utmost gratitude.

"Even before we came through the doors we were all in good hands," Lacey said.

RELATED: New Ulm thanks retiring doctor who delivered thousands of the city's newborns