Jill Arnoldy is known for the kind and helpful things she does for others. Now the community is helping her. 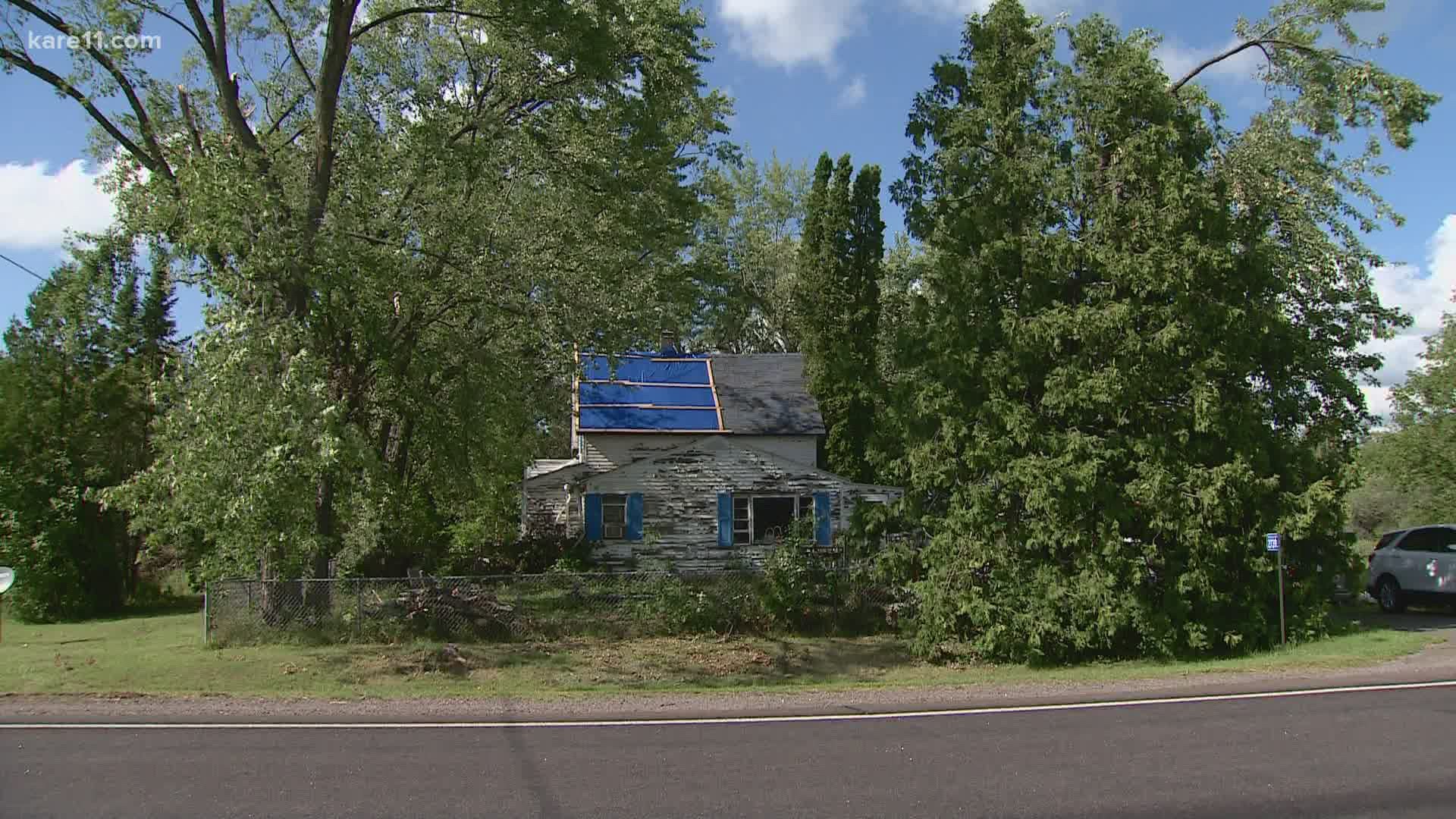 STANCHFIELD, Minnesota — Those who know Jill Arnoldy, know her for her heart. Friend Susan Bromen said, "She's known in our community for the kind and helpful things she does here."

Arnoldy, who lives in Stanchfield, is now the one in need of help.

On July 18 around 1 a.m., the power went out at Arnoldy's home. She and her three dogs hid in her bedroom as she heard glass breaking.

"I mean, it shook my house," Arnoldy recalled.

When Arnoldy tried to go outside and look at the damage, she realized she was trapped. Downed trees covered her front door and the ramp she uses to get in and out of her home with a walker.

"I wasn't hurt or anything, I just couldn't get out of my house and that scared me more than anything," Arnoldy said.

RELATED: NWS: 4 tornadoes cause damage in parts of MN, western WI over the weekend

Firefighters with the Braham Volunteer Fire Department used chainsaws to remove the downed trees. That's when Arnoldy saw the damage left behind from the EF-1 tornado.

"This is a 100+ year-old house and we've been scraping it to repaint and a whole lot of work's got to be done now," she said.

Credit: Devin Krinke
Jill Arnoldy has lived in her home in Stanchfield since 1995.

A number of large limbs from two 100-year-old oak trees came down on her home and damaged half her roof and broke several windows. The tornado twisted rain gutters and also caused damaged to her wheelchair ramp and vehicle. Arnoldy said it's going to cost more than $20,000 to fix damages to the home, which is not insured.

The tornado also took hundreds of plants she sells at local farmers markets.

"I had over 500 plants in terracotta plants and ceramic pots. What you see on that little white table in the driveway, that's what I have left. I'm rebuilding everything," Arnoldy said.

In the week leading up to the tornado, she cut her hand and needed to go the hospital. Then her cat, Ralph, died.

"That was really hard. And then the tornado hit. Then with everything going on it's like, okay," Arnoldy said.

But these hardships have been met with hope. Since the tornado, the community has rallied around Arnoldy.

The pastor from her church at Stanchfield Baptist, along with members of the congregation, helped cover her roof with a tarp and clean up debris.

The American Red Cross and Salvation Army also reached out and her friend set up a Facebook fundraiser to help cover some of the home expenses.

Personal Emergency Fundraiser for Jilly Arnoldy
Jilly Arnoldy, a Stanchfield resident for the past 25 years, also known in the Cambridge community, is urgently in need of assistance. Jilly's UNINSURED 100 year-old home sustained considerable damage from the Stanchfield tornado that swept through the area this past weekend July 18.

"Everybody has just been there for me, you know," Arnoldy said.

On Sunday afternoon, two Salvation Army majors visited Arnoldy at her home to find out her immediate needs.

"I knew she was being well taken care of but I wanted to come out and talk with her, visit with her and maybe even pray with her during this very difficult time," said Major Michele Heaver, divisional disaster services secretary for the Salvation Army serving Minnesota and North Dakota.

Arnoldy said she considers herself lucky and added, "I just appreciate everybody that's done something for me."

If you'd like to help, a friend has set up a Facebook fundraiser for Arnoldy. You can find it, here.