Parents, if your child watches too much YouTube and the stuff they watch boggles your mind, you're not alone. A psychologist explains why they watch the things they do, and offers an easy solution to the problem.

AMHERST, N.Y. — Many parents of young children find themselves in a constant struggle getting their kids to turn off YouTube. A local psychologist said she helps families deal with it all the time, and offered some explanations and solutions.

Sean Bowman of Amherst loves the peace and quiet he gets when his kids,12-year-old Isabella and 10-year-old Braeden, are glued to their phones, but even the kids admit it's gone too far.

"He [dad] tries to make the rules but we don't really listen to them," Isabella said.

Braeden said he forgets about everything around him when he has the screen in front of him.

Younger kids and toddlers find themselves watching videos of other kids playing video games, opening eggs, un-boxing and playing with toys. Ryan's Toy Review is a favorite of many.

"I don't understand why they watch it," said Bowman. "Someone playing the game that you can easily play yourself boggles my mind. Why you don't just play the game yourself?"

Dr. Nichol Eaton, a child and family psychologist with FMS Psychology in Orchard Park, NY, said it is a common discussion she has with her clients on a daily basis.

Dr. Eaton said watching videos of other kids playing with toys, actually does something to your child's brain.

"It's activating this reward component and this excitement, so it's really changing the chemical aspect of the brain while they're doing it. Much like when they're opening the gifts themselves and that excitement associated with it," she said.

Like everything in life, Dr. Eaton said, screen time is OK in moderation. But, she warned, parents should not let the phone or tablet be the babysitter.

"Extended overuse of electronics can lead to things like depression and anxiety, difficulty with social interactions," said Dr. Eaton. "So it might seem like a small problem to start but it can become a very large long-term problem for children."

And to avoid that inevitable tantrum when a parent tries to take the electronic device away, she suggested families be proactive by making a contract.

Click here for a link to sample screen time contracts.

Dr. Eaton said a simple contract for a young child could be written like this:

"We set the timer. This is how long you have to play. When the timer goes off we are done. If you get very angry and are not able to express your emotions appropriately, then we're not playing it for the rest of the day."

For older children, she said, part of that contract can include:

Dr. Eaton said parents need to monitor those things and have a balance between privacy and adult oversight for children who are not developmentally mature enough to be able to make those decisions on their own.

It's also important for children to be aware of the consequences if they don't abide by the contract or other rules. And parents shouldn't be afraid to take away the electronic device.

"It's really important that parents know that the use of electronics is a privilege. So it's not a right for your child to have a phone or have an electronic device, even if you've given it to them," said Dr. Eaton. "You are the parent and you are overseeing their lives on a daily basis. If you feel this electronic device is detrimental to their emotional well-being or their development, you have the right to pull back on that. I think parents are very afraid of what the response will be from their child, particularly adolescents, but it something that definitely needs to be addressed."

For more helpful advice from Dr. Nichol Eaton about what symptoms to look for in children who have too much screen time, the problems that may follow, proper ages for children to own their own electronic devices, and more, click on this extended interview below. 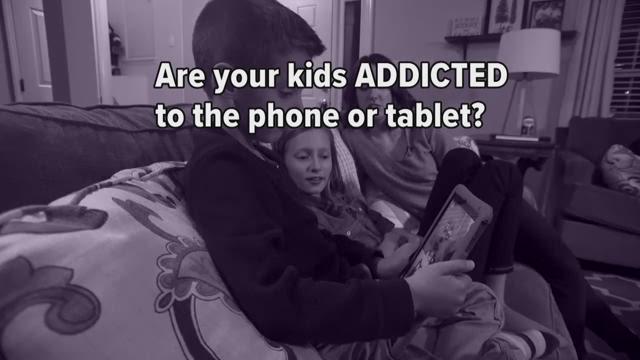