The video of Lenzen listening to the choir, wiping his eyes with a handkerchief, has been shared from the American Airlines page more than 2,600 times. 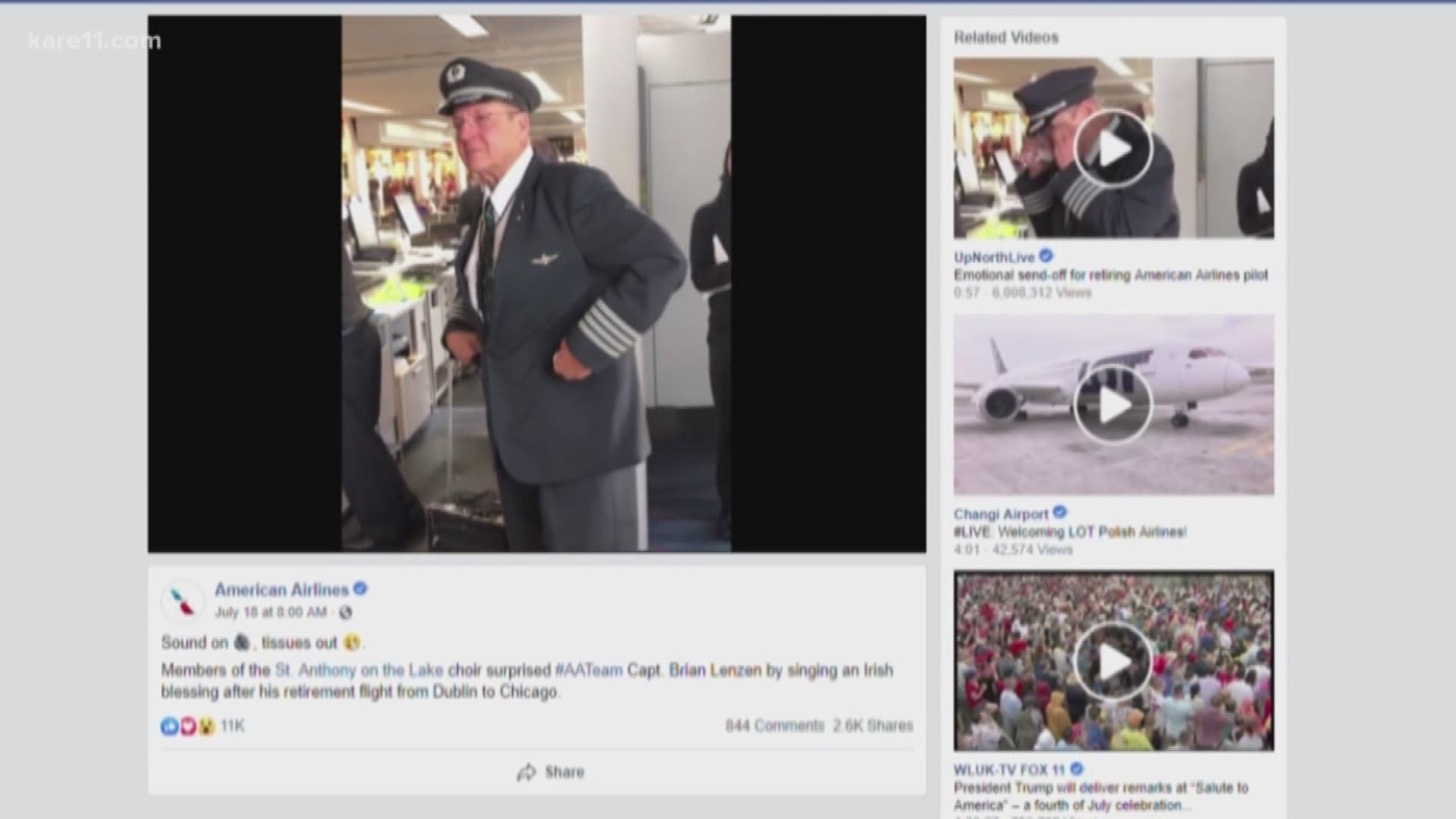 A moving video of the St. Anthony on the Lake choir singing to the American Airlines captain in the airport after his final flight has picked up steam online, with millions of views.

Lenzen, a Chaska, Minnesota native, has been with American Airlines for 34 years.

"Most pilots, they don’t really consider it work," he said. "It’s one of those dream jobs."

Lenzen went to Chaska High School and Mankato State, then learned to fly at Flying Cloud Airport. He flew several other airlines before being hired by AA in 1985. The last eight years he's flown internationally; the final three on the 787.

"I got flying because I love flying, obviously," he said. "You get paid for doing something you love, it’s a pretty neat thing."

Credit: Brian Lenzen
Brian Lenzen as a First Officer for Midstate Airlines in 1981.

Lenzen's retirement is bittersweet. It's mandatory for pilots at 65 years old, but he says he probably could have put in a few more years.

When he flew his final flight on June 24, he chose Dublin as the destination and got to hand-pick most of his crew. He says they celebrated at a Dublin pub and had a "wonderful time."

On the way back, a choir that happened to be on board his flight asked the flight attendant if they could sing for him.

When Lenzen got off the plane, they launched into an Irish blessing.

"I’m walking off the jet bridge and I hear this singing going on, and I’m like, 'What the heck is going on up here?'" he recalled.

The video of Lenzen listening to the choir, wiping his eyes with a handkerchief, has been shared from the American Airlines page more than 2,600 times. Well wishes are pouring in from hundreds of people on the post.

"It was just a very special moment," Lenzen said. "I’m kind of an emotional guy anyway, and so I got a little tearful realizing that was for me."

Although Lenzen will miss flying, he said he and his wife will make the most of retirement at their lake home up north.

"It's pretty nice to get away and not have to go to work," he said. "But also, I often miss the job."

Credit: Brian Lenzen
Brian Lenzen and his granddaughter in the 787 cockpit on a flight to Dallas - their last together before his retirement.