Local visual artists are currently working on the WE mural, located in the South Loop neighborhood of Bloomington. 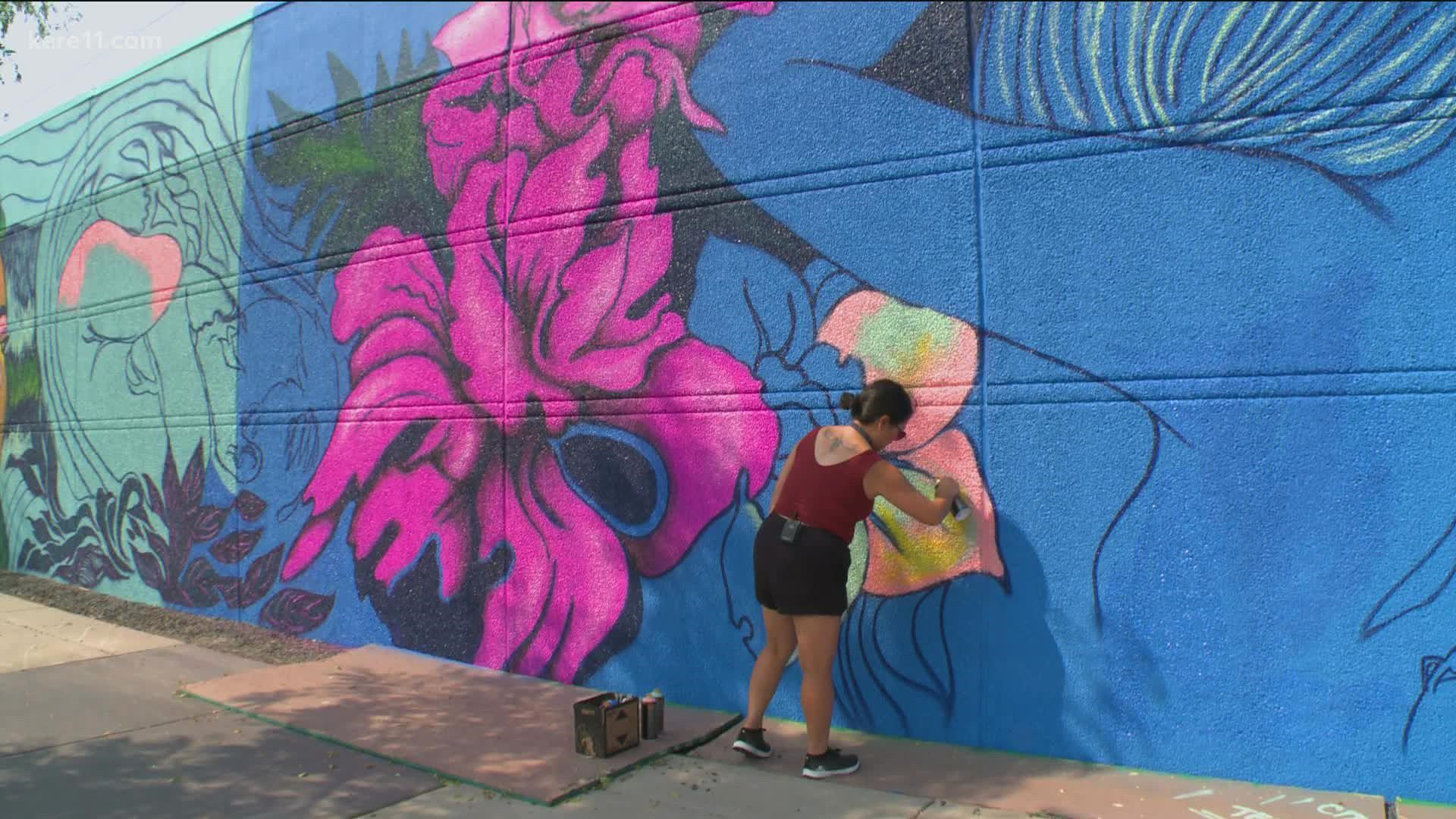 BLOOMINGTON, Minnesota — Twin Cities artists are creating what will be one of the longest murals in Minnesota.

The mural is located along 30th Avenue South and American Boulevard in the South Loop neighborhood of Bloomington, about a mile away from the Mall of America.

"We were tasked with representing the past, present, future of Bloomington and this area. So we selected artists that we felt evoked diversity and the growing diversity of the area and also representing the history of this being Indigenous land," explained Christina Vang, one of the co-founders of Ua Si Creative.

The city of Bloomington and the nonprofit Artistry selected Ua Si Creative to curate and produce the mural. Originally, it was supposed to happen in 2019 but was put on hold due to the pandemic.

"It's been really important for people to see themselves in this time, especially after all that we've been experiencing in 2020," Oskar said.

Six visual artists are working on 30th Avenue South while Ua Si Creative will take on the American Boulevard side. The mural is on the exterior of an Xcel Energy substation and is about 752 feet long.

"To take something from something that you sketch in a tiny little sketch book to putting it on a wall this size, it's pretty incredible," Reiter said.

The WE mural is weaving in a tapestry of narratives depicted by a majority of BIPOC and women artists.

"We're using public art to really just share our cultural stories with the people that are in our surroundings and to hopefully honor the folks that exist in this space that aren't really that represented," LeFlore said.

LeFlore is nearly finished with his piece of the mural that depicts river goddess Oshun.

"It's kind of a project that's paying homage to my own self discovery with my lineage, and my heritage, and my African roots and what not," LeFlore said.

TopBear, a Santee Dakota & Oglala Lakota artist, used butterflies in her mural to represent transformation and rebirth in the area.

"I feel like having these colors in this area makes it more welcoming to folks, especially people who are looking to explore Bloomington that aren't from here," TopBear said.

The WE mural will be finished by mid-September. To commemorate the mural, a Sunset Block Party will take place Saturday, Sept. 18 from 5-10 p.m. at 3001 American Blvd. E in Bloomington. You can follow Ua Si Creative on Instagram and Facebook for updates on the mural.

Correction: A previous version of this story reported organizers calling it the longest mural in Minnesota. There is at least one longer mural in the state.