Did the harsh winter help us with less Japanese Beetles this year? 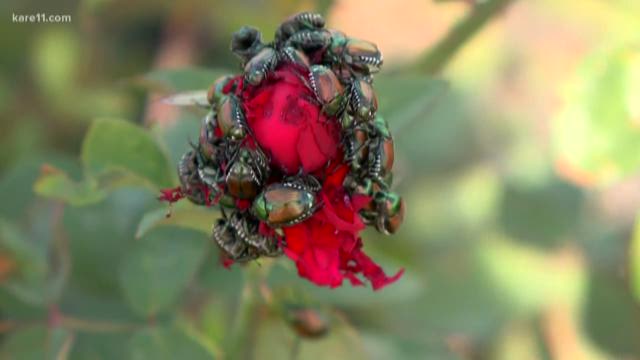 CHASKA, Minn. — Japanese Beetles have been slower to emerge this season. The Polar Vortex weather may have hurt their population. The rest of the season will tell that tale.

The Arboretum has yet to see a Japanese Beetle in their traps, as of June 25. They set traps so they can monitor the population, not as a deterrent.

Last season was especially troublesome. The arboretum's rose gardens were devastated by these pests. Wedding locations were changed due to their handiwork!

CONTROL ADVICE FROM THE ARBORETUM:

Acelepryn is the systemic insecticide we use. It is safe for bees, unlike other systemic products. It is only for sale to landscape professionals, though, so homeowners must hire a pro to treat their plants if they want to hit this hard.

We have to spray Acelepryn on the leaves of the roses once every three weeks while the adult beetles are present. Most seasons we can get away with two applications total, but last season was longer than normal so three would’ve been best in retrospect.

In addition to the systemic applications, we use Neem Oil as a foliar spray, but only when the bees are not present, as Neem is toxic to them too when it is wet. Once dry, it’s okay for bees. Neem leaves a residue on the leaves and if the beetles eat it, they stop feeding and starve over the next few days. It only lasts for 4 days so many applications are needed if you only use Neem.

This year, we will try a species of Bt (Bacillus thuringiensis) that is specific to beetles. The product is sold under the name BeetleGone. Not an endorsement as we haven’t tried it yet. The idea with any Bt product is that it is specific to one order of insects so it won’t hurt the rest. It is harmless to bees and butterflies. However, it also needs to be applied every three or four days so it may be too time consuming and expensive. But it’s worth trying anyway.

There are other insecticides that leave residue on the plants that are poisonous for JB, but they are pretty nasty products. We try to choose chemicals and biological products that won’t harm pollinators or our visitors, volunteers, and staff.

Also, at times, gardeners and volunteers physically pick JB off of plants by hand and put them in soapy buckets of Dawn to kill them; they must sit in the soapy water for 24 hours to kill them; after they are dead they can be disposed of.

Don't over water your lawn! JB grubs bury themselves down to a foot in the soil and copious watering only makes them healthier! Let your yard dry out a bit and you help keep them 'down.'

At last count, Japanese beetles were known to prey on more than 200 plants in North America.