A new indoor athletic facility is opening in Rosemount in 2020 with the mission of giving more opportunities for kids of all abilities to play. 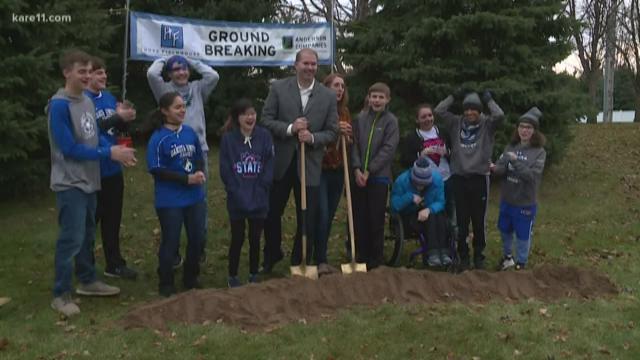 ROSEMOUNT, Minnesota — With a shovel in hand, Dan Corley broke ground on the site of a new indoor athletic facility in Rosemount.

"Hope Fieldhouse: Where everyone has a place to play," Corley said to the crowd.

Sunday afternoon, the community gathered outside next to Hosanna Rosemount to celebrate the groundbreaking of Hope Fieldhouse. Fundraising efforts began two years ago when Corley noticed his son, Austin Corley, who has autism, didn't have a place to play the sports he loved.

"Some of the teams were moving a bit too fast for me," the 17-year-old said.

"There's a gym shortage crisis in this area and kids of all abilities don't have the access to courts that they need," Dan Corley said. "As the project started along, the need for adaptive sports really became the central focus of this project... kids like my son, Austin, struggle to find gym space, adequate places to play sports. We just thought we wanted to do what we could to help with that community."

The fundraising campaign hit its $2 million goal, allowing them to break ground on the 42,000-square-foot athletic facility. The building will include a fitness center with access to a walking track, four hardwood basketball/volleyball courts and locker rooms. You can look at the full plans, here.

Austin said he's looking forward to playing baseball and basketball with his friends and siblings.

Hope Fieldhouse is expected to open in late spring 2020. Corley said they will also offer gym memberships which will help support the nonprofit's mission.