How more than 100 trips under a small town railroad bridge eventually led to a heavy rock and roll band with a great name and amusing backstory. 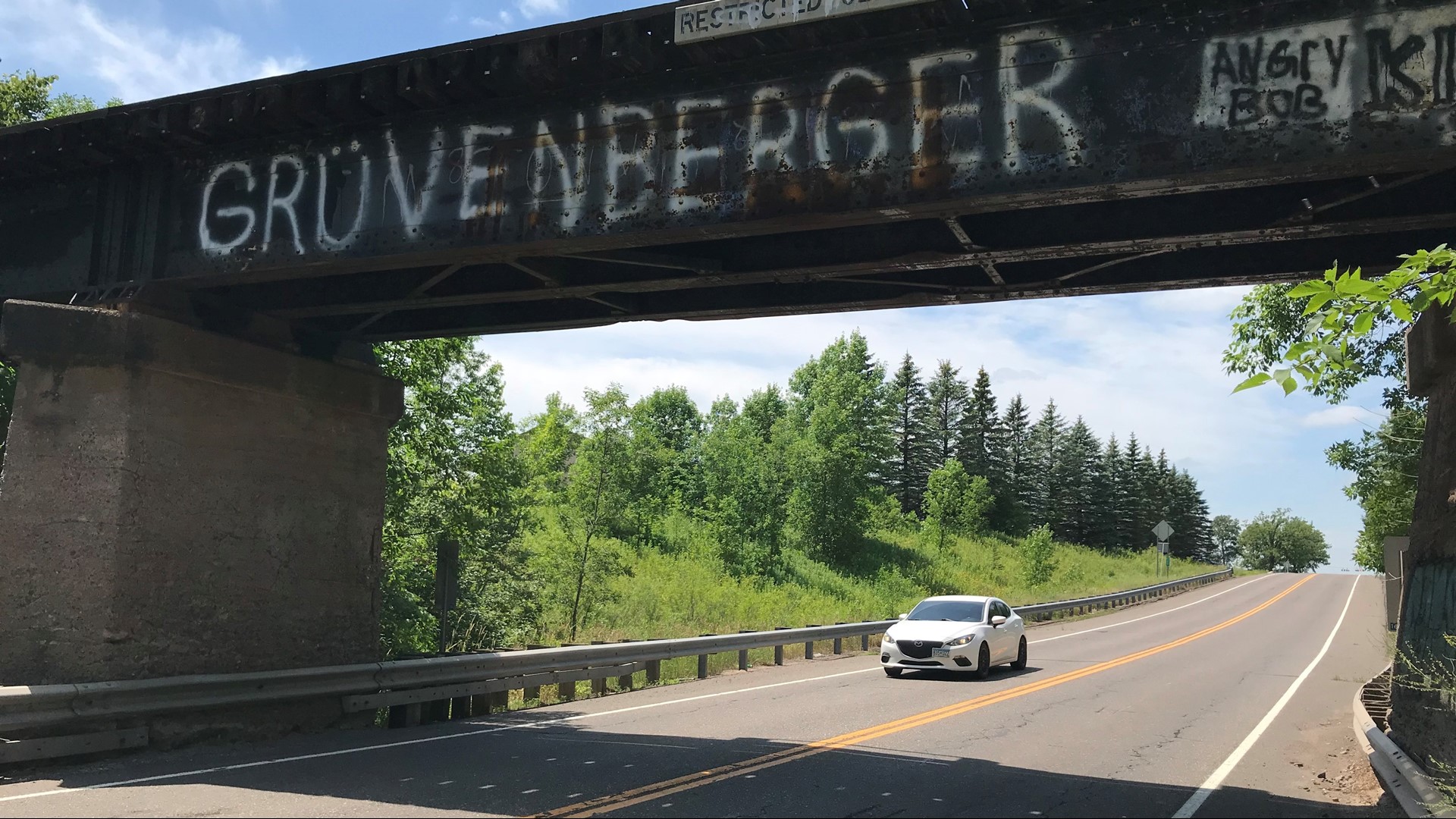 That pretty much describes my response to a message spray painted on a railroad bridge that serves as a gateway to the metropolis of Rock Creek, Minnesota, population 1,620.

A bit of history would probably help. I have been driving under the Highway 70 bridge in Rock Creek for the better part of my 57 years, as it lays along my late father's favorite route to the family cabin in northwestern Wisconsin. The bridge itself marked a "halfway to the cabin" point of sorts but was otherwise unremarkable until several years ago, when an impossible-to-ignore word appeared on the side I see while driving home.

"What the heck does that mean?" I recall thinking, gazing at the large, spray painted white letters while piloting my old Jeep underneath the bridge.

Credit: KARE
After years of driving under the "Gruvenberger" bridge, I finally had to uncover what the word meant.

On a subsequent trip I came to the conclusion that Grüvenberger would be a great name for a hippy-dippy, Grateful Dead-themed fast food restaurant. Eventually I settled on the likelihood that the graffiti was the work of a rebellious local high school kid with a catchy nickname who fancied himself the Ferris Bueller of Rock Creek, was out of school as much as he was in, and never got caught doing anything.

Like spray painting a goofy name on a bridge.

I imagined the kid known as Grüvenberger hanging off the railroad bridge the night before graduation on a frayed old rope, operating on liquid courage after convincing an older local ne'er-do-well to buy him a 6-pack of beer. The spray painting stunt would naturally become the stuff of legend in Rock Creek and other small communities that dot the east central Minnesota border.

One thing was certain... Grüvenberger is an extremely fun word to say, even better at high volume. On trips home from the cabin my daughters and I would approach the bridge driving west on Highway 70 and shout "Grüvenberger!" while channeling our best inner surfer dude persona.

Despite the fact an answer was just a few keyboard strokes away, years went by before I finally took the initiative during the summer of 2021 and typed the mysterious name into the search box on Google.

As it turns out, Grüvenberger isn't a he or she... it's a THEY. Google quickly steered me to the Facebook page of a heavy rock band headquartered in Rock Creek. An inquiry left on Messenger led me to drummer Jason Dwyer, who soon enlightened me on the origins of Grüvenberger and how the moniker ended up painted on the bridge.

"The name obviously is German," Dwyer said during an entertaining half-hour zoom call, explaining that it belonged to a doctor-scientist from the early 1900s. "It came up in a conversation with my pal Colby, he’s the guitarist in the band, he said, 'lets call ourselves Gruvenberger'… we just happened to be talking about this scientist because we have nothing else to talk about."

Dwyer says the band - currently him, singer Jade Whittwer, guitarists Colby Larson and Chad Ehrnriter, and bassist Tim Ristow - came together in 2012 and adopted a number of names including "Sip," a reference to their fondness for the occasional cool beverage (or two... or three). The permanent switch to Grüvenberger was the beginning of a more successful chapter, with battle of the bands competitions, increasing local gigs and even some recording of original music.

"It’s kind of a giggly name," the drummer says, "cause I’ll tell people the name of the band and they’ll giggle. It’s kind of unorthodox."

That giggly, unusual name helped with "word of mouth" advertising, but the band needed something more to get people talking.

In 2013 Grüvenberger mysteriously appeared on the span in spray paint, demanding the attention of hundreds of motorists each day... even more on summer weekends as people made their treks to lake country. Dwyer deftly dodges attempts to pin the work on him or his bandmates, answering my inquires of responsibility only in hypothetical terms.

"I would imagine the best way of doing it would be a guy in a harness and a couple of guys maybe holding a cable," he says with a grin," you know you might have to hurry up and get back up there if a car is coming around the corner, and I would imagine it was at around midnight… that’s what I’m guessing."

Credit: KARE
Drummer Jason Dwyer says he "heard" those responsible for painting the bridge first sprayed Gruvenberger in red, only to find out it was hard to see in daylight.

As noteworthy as the difficulty of spray painting that many big letters - while hanging off a bridge over a heavily-traveled road - is the fact that it was done more than once. Dwyer says he "heard" that the aerial graffiti artists painted Grüvenberger in red the first time, then noticed it didn't show up very well on a brown bridge when daylight arrived. The subsequent effort, using bright white paint, was impossible to miss.

"I can only assume it was such a hard piece of graffiti art to put up there, it’s probably just as difficult to paint over," Dwyer reasons when asked why the railroad hasn't repainted the bridge. "And they’ve got better things to do, I think… That bridge, it’s not hurting nobody, so I don’t think they take it too seriously."

Neither does local law enforcement, apparently. Dwyer says he has never been approached by a local police officer or deputy. "I’m sure they’re aware of this. I think some of the local authorities might even be fans of the band so they leave it alone. So that’s kinda cool."

Dwyer seems genuinely surprised (and somewhat amused) that people will see the Grüvenberger name on a concert flyer or band t-shirt, or approach them at a gig and immediately bring up the bridge. He says the name - and the backstory - reflects what they're about.

"We’re kinda kids that don’t want to grow up, in a sense… we gotta pay our bills, but we also gotta live a little bit," Dwyer says. "I think Grüvenberger stands for have fun, live a little bit, life’s short, lets have fun and lets do it together."

Grüvenberger's next scheduled gig is on October 30 at Froggy's in Pine City. Jason and the guys would like to see you there.

If you have seen or heard something unusual on the landscapes of Minnesota and western Wisconsin and are curious about the story behind it, send an email to news@kare11.com. I might be able to dig something up for you.