Jim Blum's quest to improve and extend his life led him to stand near a highway exit ramp with a sign asking for someone to give him a healthy kidney. 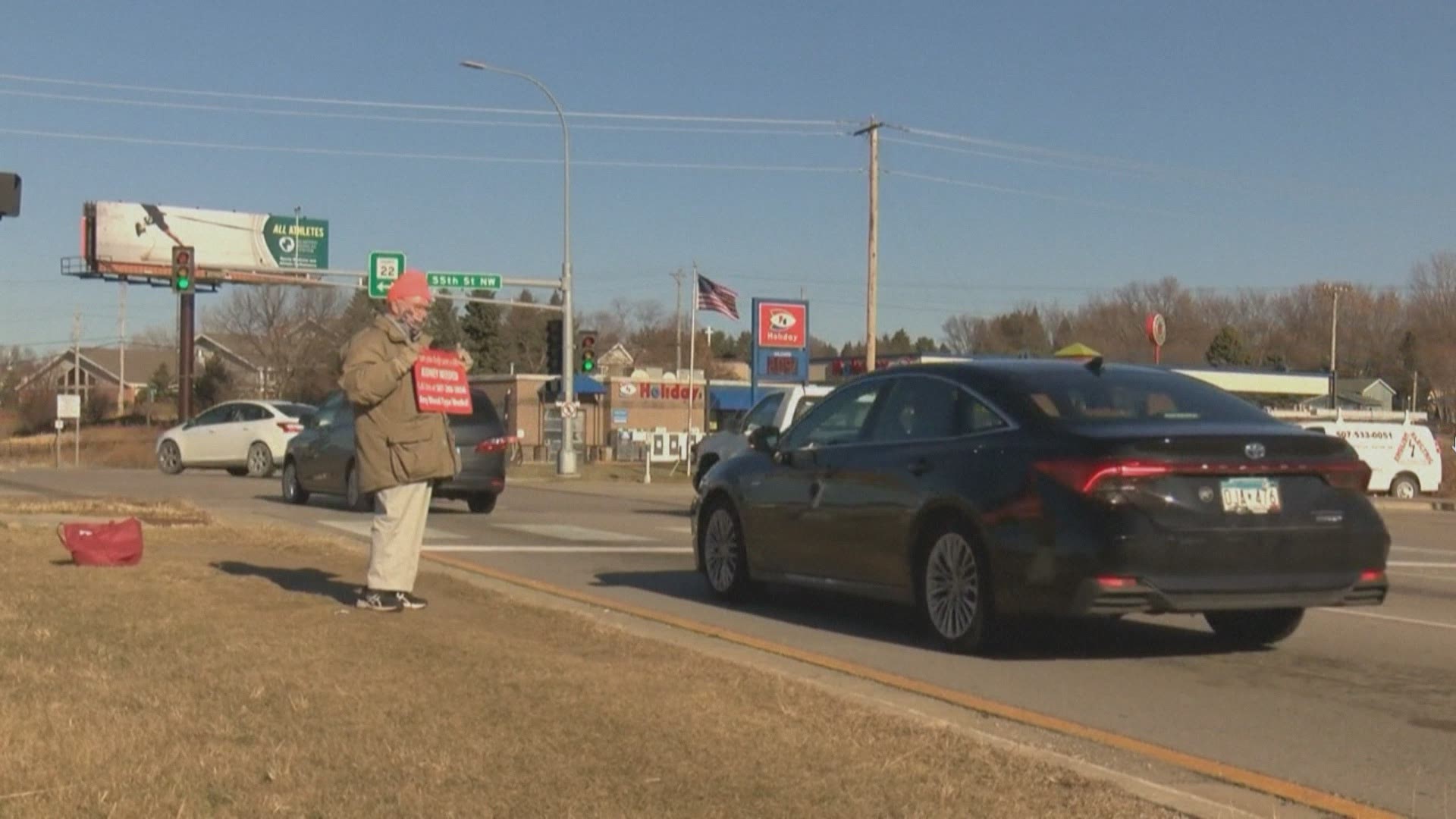 ROCHESTER, Minn. — Jim Blum was in need of a kidney when he displayed a sign near an off-ramp of Highway 52 in December 2020. He had survived a battle with cancer, only to discover that his kidneys had been damaged as a result.

Six months later, a donor came forward, and a successful transplant has been completed.

Blum knew his decision to ask the public for a kidney from the side of the road was "unconventional," but thought his circumstances called for some creativity. Jim's wife, Patti, was skeptical at first.

"I said, 'like hell you are, what are you, crazy?'" recalled Patti, when told of his highway sign plan. But after some consideration, she felt there was nothing to lose.

"For somebody like Jim, an average life expectancy on dialysis at five years, is about 50%," said Mayo Clinic surgeon Dr. Mikel Prieto, who performed the transplant. "So yes, he was right in thinking that, you know, dialysis is going to slowly continue to damage [his] body and that he might not make it."

The Blum family received calls from multiple people who said they were willing to donate. After hitting a few dead ends, they found someone who was willing and able to follow through with the procedure. Her name was Kate Welp.

Welp made her fateful decision after seeing Jim perched near the exit ramp.

"It made me think he must be kind of at his wit's end if he is standing out there in the cold, holding a sign, looking for a kidney," she recalled.

Driven by a desire to put some good back into the world, Welp decided to act.

"I thought, 'I'm not getting any younger, that if I'm going to do this, I should maybe do it now,'" she said.

Dr. Prieto said the kidney donated by Kate started working right away. It began producing urine and was accepted by the rest of Jim's body.

"I could see it the next day, the difference in him," said Patti.

"I feel good," Jim said. "I didn't realize how beat up I felt on dialysis. And just the pure fact that I can get back to what I perceived as my normal life."

The Blums are looking forward to living their lives to the fullest, with trips to the cabin and plenty of time with the grandkids.

"I couldn't go there all the time because I had to be on dialysis," Jim said.

Both Jim and Kate are comfortably recovering.

"Just the thought, knowing that Jim is doing so well, any little pain I have is well worth it," Kate said.

If you're interested in becoming a living organ donor, visit Mayo Clinic's website to find out how.