The good news, is that their life span is short. The bad... the hovering, exploding bug makes things nasty while it is around. 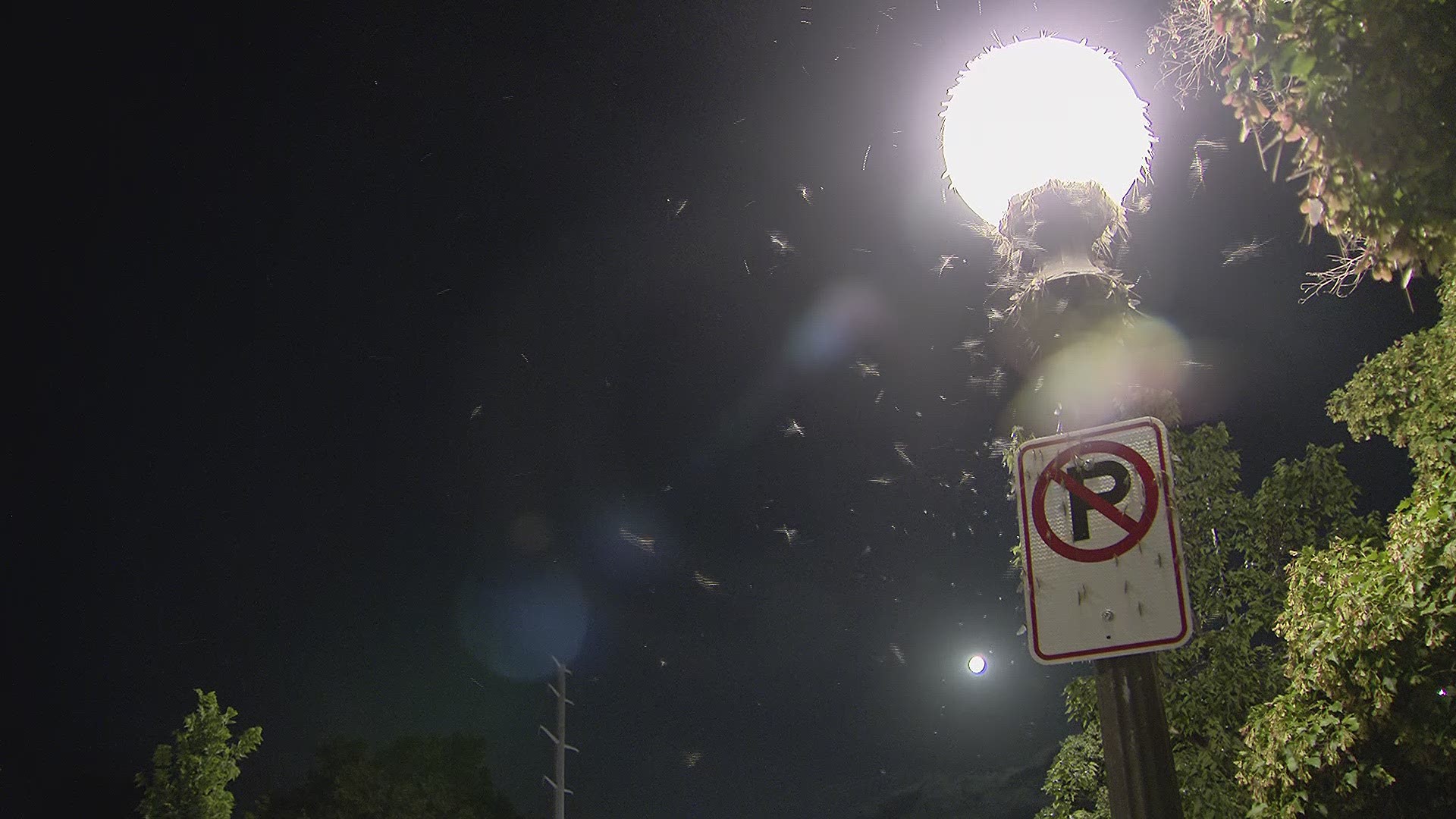 ST PAUL, Minn. — Nearly every creature on earth plays a part in the natural life cycle. The mayfly is a prime example, serving an essential role in the aquatic food web.

As just-hatched nymphs, mayflies are ingested by invertebrates, amphibians, reptiles, fish, birds and mammals. Those that make it to the adult stage often serve as nutrition for birds and bats. Once the mass of swarming, mating adults dies there is a literal smorgasbord on the surface of many lakes and rivers when they often number in the millions.

But it seems there is another purpose for the mayfly, a bit less important but far more obvious: Grossing out the humans that pass through their environment. KARE 11 photojournalist David Peterlinz was in St. Paul Wednesday night when he found himself in the midst of a significant mayfly hatch.

The Minnesota Department of Natural Resources (DNR) website says the ‘hatch,’ as it is referred to by fly anglers, is often synchronized so that many burrowing mayflies emerge at once. They are referred to as "burrowing" because they often dig into the sediment and mud on the bottom of lakes and rivers before hatching.

DNR research scientist Gary Montz says the mayfly hatch in central and northern Minnesota is usually a bit later, say July 4 or so, but reasons that the hot early summer may have warmed lake and river water, causing things to pop a bit earlier. He adds that the Mississippi River and large bodies of water like Mille Lacs have traditionally had the largest hatches, but the numbers can be impacted by water levels (low water means less oxygen, smaller hatch), longer winters, and chemical spills.

Montz says that anglers hate mayfly hatch time, as fish tend to far prefer mother nature's bait. "Why bother with some jig as a fish, when you have all these fat little morsels moving from the lake bottom to the surface that take no effort to find and eat?"

This was the scene near the Smith Avenue High Bridge in St. Paul, late Tuesday Night. A large and loud Mayfly hatch was underway in the Capitol City. @KARE11 @BelindaKARE11 #KARE11Weather pic.twitter.com/BtF5KVf9cn

Mayflies are so delicate, especially in larvae form, that when you collide with them (even at walking speed) they have a tendency to explode on your clothes or worse... your face. Hatches can be so large that clouds of bugs show up on weather radar as a storm or precipitation might.

When they die (winged adults only live for about a day), mayflies fall to the ground and are easily squished, leaving a greasy, nasty coating on roads, bridges and paved trails. In fact, the city of Hastings has been known to turn off all public lighting along streets and parking lots along the Mississippi riverfront to lessen the impact (and mess). Other cities have seen hatches and die-offs so large they have had to call in snowplows to remove them.

Here are some facts about the mayfly to amaze and impress your friends: