After her grandmother and rescue dog had health issues because of dental disease, Emily Stein came up with a now-patented formula to help. 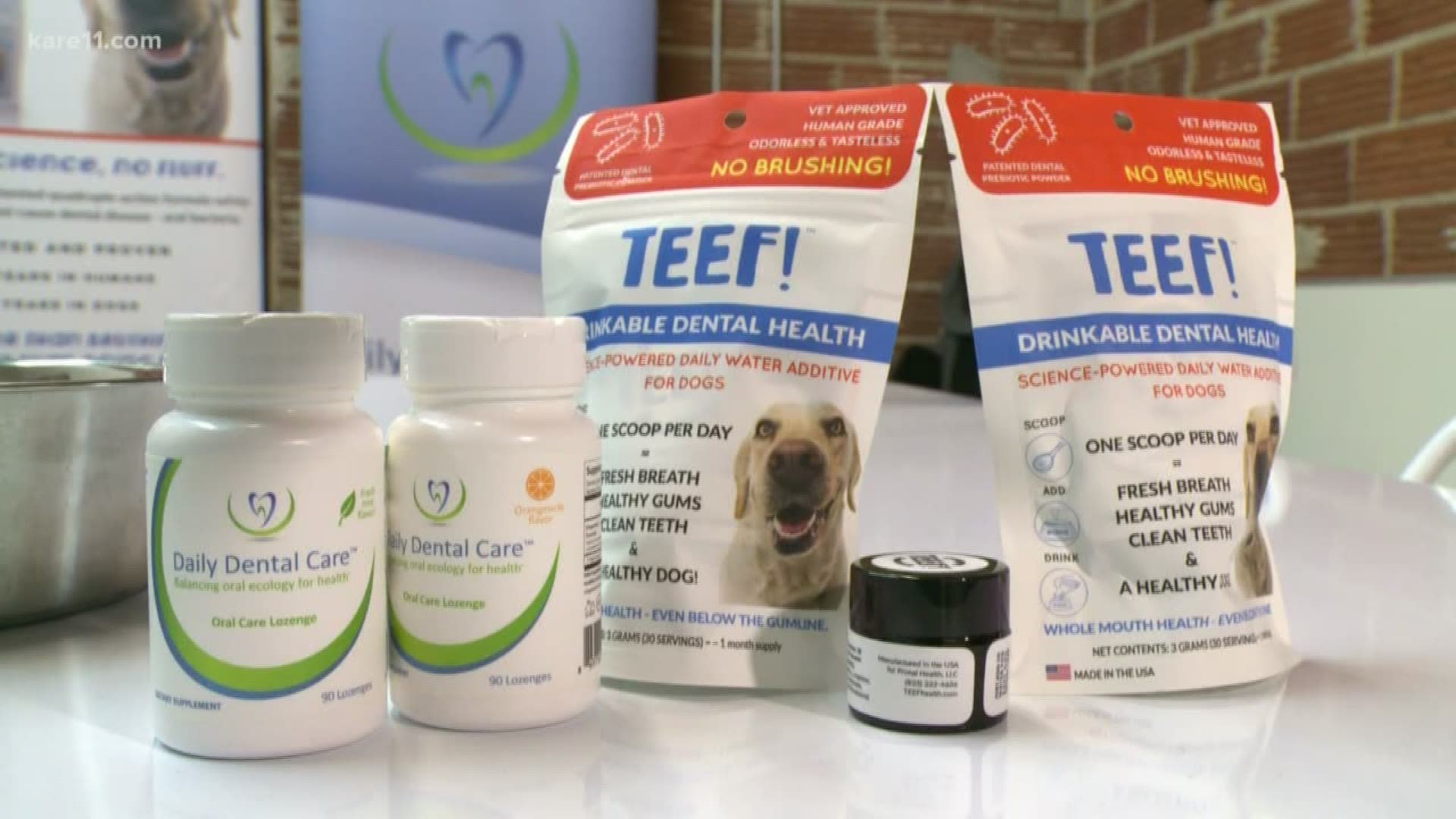 MINNEAPOLIS, Minnesota — When looking at health, Emily Stein starts with the mouth.

Stein, a microbiologist and entrepreneur, is focused on tackling the root cause of dental disease.

It all started when Stein was studying at Stanford and her grandmother was living in an assisted living facility in Wisconsin. Stein's grandmother's rheumatoid arthritis was making it hard for her to brush her teeth. It led to several tooth extractions, followed by a stroke.

"It turns out that's a very common story, surprisingly... the link between gum disease and cardiovascular problems," Stein said. "I flew to La Crosse, Wisconsin to be at her side, grabbed her oral microbiome... flew it back to my apartment in the Bay Area and I biohacked it to come up with an approach that would stop any further disease in my grandmother."

That was in 2011. Four years later, she rescued a dog from a shelter in need of extensive dental work. During the drive home from the shelter, Tinzley's gum disease progressed to sepsis. Her dog needed 21 teeth removed to help clean Tinzley's mouth and body from the infection. About 80 percent of dogs show signs of gum disease by the age of 3 years old.

"I basically transitioned what I was working on for my grandmother to dogs and it turns out humans and pets, we're all struggling with this. As we age, it becomes a significant problem," Stein said. "There's an unmet need right now... they're [pet owners] having to spend a lot of money to clean their dogs' teeth and they don't want to put their dogs under so often."

It led to creating the startup, Primal Health, LLC. The company, based in northeast Minneapolis, offers an award-winning patented product that helps increase good bacteria in the mouth to take over the bad bacteria as well as block sugar and carbohydrate uptake.

Stein demonstrated how it works with two stuffed animals, saying, "If these are two organisms that live below the gumline in the mouth of a dog, this guy causes gum disease, this guy protects the mouth of the dog. What happens over time as we age is the disease-causing bacteria outnumber the protective ones... What we're doing is, through nutrients, just giving the good guys a leg up and we're stymieing the bad guys from being able to grow."

The product for dogs is called "TEEF!" A small scoop of the powder is dumped into the dog's water bowl every day. It also helps with dog breath.

In humans, their product is called "Daily Dental Care." It's a mint that should be taken after eating or brushing your teeth. It works below the gumline where dental disease starts.

Stein said they use human-grade ingredients and it's safe for kids and pregnant women to take.

"Prebiotics are new in the market and it's a concept that's a little contrary to what our society is used to. We have technologies that are supposed to promote health. A lot of them are antiseptic and antibiotic, trying to kill all sorts of bacteria and bacteria is the enemy. Emily's approach is completely different. It's a way of manipulating bacteria in favor of human and animal health," said Lindsey Campbell, co-founder and head of business development at Primal Health.

The company was founded in June 2017 and since then, they've snagged quite a few top awards. In October, Primal Health's TEEF! received first place at the Pet Innovation Challenge.

They're now working on versions for cats, horses and other animals. TEEF! is expected to launch in pet stores in mid-November.

Both human and pet versions cost around $28 per month. You can by their products online, here for dogs, and here for humans.