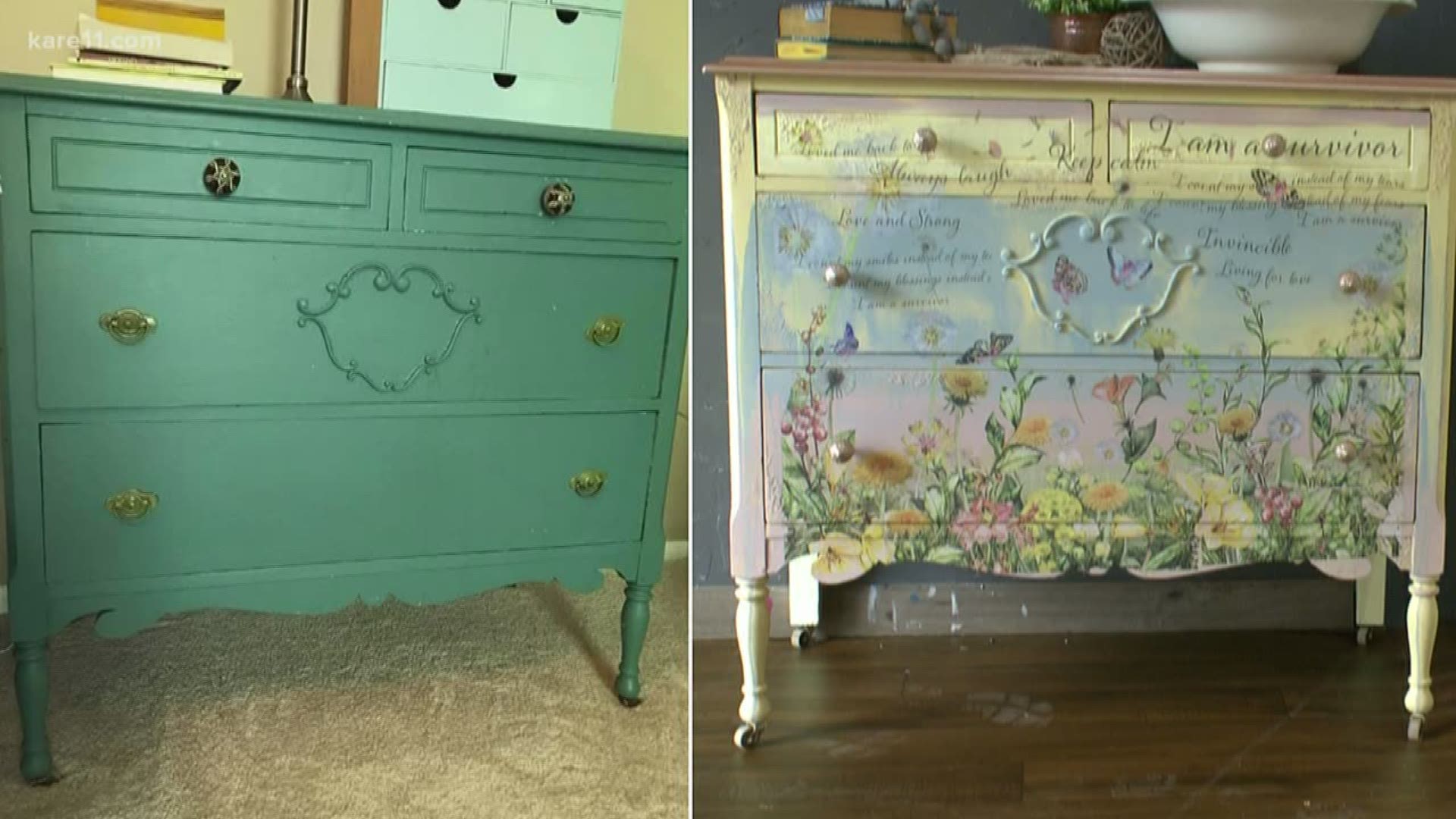 MAPLE GROVE, Minnesota — A Maple Grove-based business is bringing new life to secondhand furniture and now the husband-wife team is using their talents to give back.

"This just fulfills that creative outlet for me," KT Lyons said.

About six years ago, Lyons wanted to refresh some of her old furniture so she painted it. When she later listed the pieces on Craigslist, they sold immediately.

"I was in shock and I thought, 'Wow, I could really make something of this,'" Lyons recalled.

KT started KT Lyons Design with her husband, Don. Don picks up and drops off the pieces and helps with repairs, while KT focuses on the design side.

"What do I like about it? It makes KT happy," Don said.

They work on custom orders, and sell their pieces online and in stores in the Twin Cities metro area.

Credit: KARE 11
A before and after of the dresser.

While searching on Facebook Marketplace about a year ago, the couple came across a $30 vintage dresser.

When they went to pick it up, Lyons said, "I got out of the truck and I said, 'Am I crazy or are you Laura Betker?'"

It was the KARE 11 meteorologist. About a decade ago, Betker's sister found a pair of dressers at Second Hand Rose in Buffalo. When her sister was going to sell them, Betker bought them. They sat in her bedroom until last year when she decided to sell one of them.

"I had been kind of watching for it to come up [on KT Lyons Design's Facebook page] because I wanted to see what my dresser had turned into," Betker said.

"I'm on the design team with Re•design with Prima and they launched a campaign for October for Breast Cancer Awareness and the designers were given one of the transfers to transform a piece with," Lyons said.

The dresser is being sold through an online auction on KT Lyons Design's Facebook page. The auction started earlier this week and will end at 8 p.m. (central) on October 30. The full bid amount will be donated to Breast Cancer Research Foundation.

"I was amazed at the transformation and so great that it's being sold to go to a good cause. I have just like a tiny little part in that," Betker said.

Lyons added, "Just do whatever we can to donate to such a great cause."

The piece is also available to view in person at Painted of Anoka.