Two college students have created a clothing company based on the "buy one, give one" model. 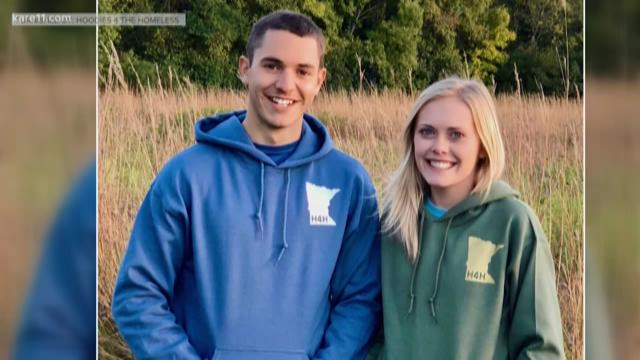 A couple of University of Minnesota Duluth students have launched a clothing company that's focused on helping the homeless.

It all started this summer when Bryan Bokusky returned from boot camp with the United States Army National Guard and was deciding what to do with his bonus.

"I decided instead of buying a new car, or doing something with it, I should put it to something that's worthwhile. So I decided I would start a company," Bokusky recalled.

He, along with co-founder Cassidy Dow, launched "Hoodies 4 The Homeless" in September. Both are juniors at UMD. Bokusky is majoring in healthcare management, with a minor in finance and entrepreneurship; Dow is a communications major.

"Our main method right now is a buy one, give one program. So whenever someone buys a hoodie, we turn around and we give a hoodie to someone in need, as well," Bokusky said.

Hoodies 4 The Homeless so far sells sweatshirts, long-sleeve shirts, T-shirts and blankets. All products have their "H4H" logo on them.

"There's, like, struggles obviously in every business but it's been a very rewarding thing for me... I loved going to donate the first ever hoodies that we got to donate," Dow said.

Since launching this fall, they've donated about 65 hoodies. Bokusky said they are working with the nonprofit Sharing and Caring Hands in Minneapolis. They've also donated to the Dorothy Day House and are now focusing more attention on helping those at the Hiawatha homeless encampment.

In Minnesota, at least 7,600 people experience homelessness on any given night, according to the U.S. Department of Housing and Urban Development.

"Eventually I want to take the business into a different method. Instead of buy one, give one... just giving 50 percent of our profit. So we can eventually start to give back to the homeless in any way they need it," Bokusky said.

Dow comes up with the designs and Bokusksy puts them on products he gets through a wholesaler. They've added "ugly Christmas sweatshirts" for the holidays and have plans to expand with other warm items like stocking caps.

As far as the future of the business, Dow said, "I'd just like to see it go up even more. Give back as much as we possibly can."

You can check out all their items on their website.