An unlikely trio found a new passion in making spirits, and they each have a unique part to play. 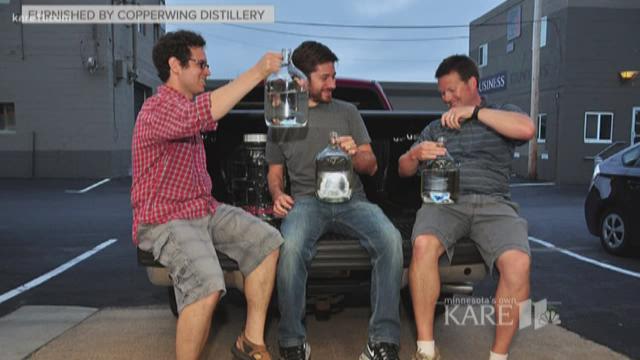 ST. LOUIS PARK, Minn. - An engineer, an attorney and a doctor walk into a distillery.

No, it's not a joke. And actually, they talk into it because they started the place together.

Kettering was once a mechanical design engineer and worked with Palmisano, who at the time was an electrical engineer. He would go on to become a patent attorney.

The unlikely trio found a new passion in making spirits, and they each have a unique part to play.

Kettering is the distillery's chief operating officer, known as "the gears. Palmisano is the chief manager, or "the engine." And Palmisano's neighbor, Dr. Brian Idelkope, a family physician, is Copperwing's CFO ("the steam").

"We more or less got our product started here through experimentation," Kettering says. "Trial by many errors, until we figured it out."

Their first product, which became their cornerstone, was born from rudimentary equipment and a happy accident.

"We were using a whiskey recipe, but we didn't quite get to the threshold to call it vodka, but we wound up with something really delicious," said Palmisano.

In its current adaptation, it's called Vodski.

"Vodski is from a bourbon mash, so it's like a whiskey, so instead of it being aged in a barrel, we distill it like a vodka," said Kettering. "Just not all the way to the threshold where you have to call it vodka."

With a lower proof than 190, Kettering says the spirit retains more flavor.

"It contains some of that whiskey flavor from the grains and it's got a little sweetness from the corn and a little floral aspect, but it is really nice – really smooth.

In addition to Vodski, the men at Copperwing distill vodka, gin and light whiskey.

"Pretty much all the ingredients to make the spirits are locally sourced," says Kettering.

Learn more about Copperwing Distillery online. They are located at 6409 Cambridge Street in St. Louis Park.

Stop by Saturday and if you mention you saw this story on KARE 11, you'll get happy hour all day.