Here in Minnesota, there are several events taking place on Saturday. Here's what you need to know. 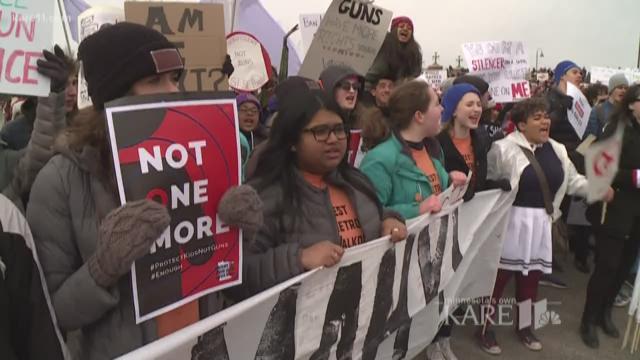 ST. PAUL, Minn. - Thousands gathered in St. Paul Saturday for the local "March For Our Lives" rally, as hundreds of events took place across the country to protest gun violence in school and support changing gun regulations.

Students and supporters gathered at Harriet Island in St. Paul before marching to the capitol, saying this is the time for change. Authorities estimated the crowd to be around 20,000 marchers.

The crowd was diverse in age, but was unmistakably led by students. Many could be heard chanting, "This generation will change our nation" and "No more silence, end the violence."

Others held signs stating "Not One More," "Never Again," and "I shouldn't have to march for my life."

Across the country, nearly 840 rallies are planned to support the main movement in our nation's capital.

St. Paul Police are warning motorists and residents that there will be a number of closures due to the march in St. Paul.

To avoid closures on Wabasha, police advise taking I-94 or Shepard Road. Parking is limited, so marchers are encouraged to park downtown and walk across the Wabasha bridge.

PHOTOS: Celebs at the March For Our Lives

1 / 21
Chip Somodevilla
Miley Cyrus performs "The Climb" during the March for Our Lives rally on March 24, 2018 in Washington, DC. (Photo by Chip Somodevilla/Getty Images)

Let your family know you’re going to the march and bring a friend (or a few!) along with you. Decide a location and time where everyone can meet up if your group gets separated.

Fully charge your phone before the march, but in case it dies, write emergency contact numbers on an index card or even your arm. To make it easier to communicate at the march, consider downloading an app such as FireChat, which allows you to instant message without using data or Wi-Fi within a 200-foot range. Use #marchforourlivesdc and #MFOLDC to share images and videos from the protest on social media.

It might also be a good idea to turn off the fingerprint unlock feature on your phone. Although it’s incredibly unlikely, the police could force you to use your fingerprint to unlock your phone, but they can’t ask for your password thanks to the Fifth Amendment.

How to interact with law enforcement

Demonstrators at large, peaceful marches like this typically don't interact with the police unless they are doing something illegal like purposefully blocking a road. If you get stopped by the police, the ACLU says you should "stay calm, be polite, and don't run." Some states have “stop and identify laws,” meaning that if a police officer asks you to identify yourself you must give your name. Keep your hands visible and ask if you are free to leave.

Whether you’re a citizen or not, the First Amendment protects your constitutional right to demonstrate peacefully. You also have the right to photograph or film police. Police can pat you down to make sure you’re unarmed, but unless you are under arrest, you can refuse to consent to a search.

If an officer says you are under arrest, don’t resist even if you don’t think you’ve done anything wrong. You can ask why you’ve been arrested, otherwise you have the right to remain silent.

How to deal with counterprotesters

Remember that counterprotesters have rights, too. As long as they are not physically interfering with the main demonstration, they can attend the event and speak out. Police will generally keep the two groups separated, and it’s best not to engage with counterdemonstrators, according to the ACLU.