The Minnesota Twins have stepped up to help Puerto Rico in the wake of Hurricane Maria. 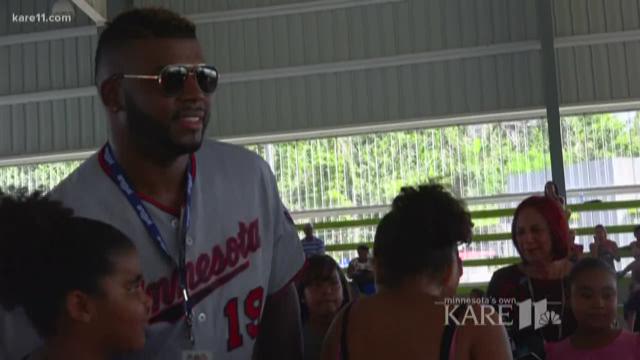 SAN JUAN, Puerto Rico – In the six months since a hurricane wreaked havoc on the American territory of Puerto Rico, the island community has found fierce allies in its recovery: businesses, organizations… and the Minnesota Twins.

“When we find out what’s happened, we work together with Puerto Rican Coalition, Minnesota,” said Miguel Ramos, Director of Diversity and Inclusion for the Minnesota Twins about the team’s ongoing support of the work being done by Coalición de Boricuas en Minnesota – or Coalition of Puerto Ricans in Minnesota.

On Sept. 20, 2017, Hurricane Maria slammed into Puerto Rico, relentlessly savaging the island’s tropical landscape and power grid. Six months later, official government sources suggest nearly 167,000 Puerto Rican people remain without power. And those who call the island home say that number does not account for the intermittent nature of the electrical connection to many communities.

During a recent tour of the island, KARE 11 found trees and power poles still lying on the ground, darkened traffic lights and an overall landscape that suggested the storm had hit days – and not months – earlier.

During a recent tour of Puerto Rico, KARE 11 found trees and power poles still lying on the ground, darkened traffic lights and an overall landscape that suggested Hurricane Maria had hit days &ndash; and not months &ndash; earlier. (Photo: KARE 11)

THE WORK BEGINS IN MINNESOTA

Ramos remembers the first images of devastation to come from his native island. And the Twins official remembers how his organization quickly stepped up to help the Puerto Rican community.

“So one of the first things we did was one game at Target Field … we collect food, and we collect financial support,” Ramos recalled about the initial drive that resulted in the team sending a container filled with food and water to the island.

And the organization continues to work with the Minnesota coalition to provide the support the community currently needs: whether monetary donations, tangible materials, or even visits from Twins players themselves.

“We keep on going. Because this is something that you know is going to stay for many years,” Ramos said, adding, “The Twins organization is an organization that care about all Twins and all territories where we play … wherever we play, we care about the people that live in that area.”

‘SEE WHAT I CAN DO FOR MY PEOPLE’

On a hot day during the holiday season, the towering figure of Kennys Vargas climbed out of a vehicle parked in a neighborhood about an hour outside of San Juan.

Vargas – a designated hitter and first baseman for the Twins – walked into a field house crowded with children, who cheered when they saw the Puerto Rican baseball icon.

“I know I can give some smile from them, and make their day a little bit more happy,” Vargas said about the Three Kings Day celebration, a Puerto Rican holiday involving gifts for children that in this case was sponsored by several entities, including Jet Blue and the Minnesota Twins.

Minnesota Twins designated hitter and first baseman Kennys Varga is something of a Puerto Rican hero, returning to his home after Hurricane Maria to offer hope and help. (Photo: KARE 11)

For Vargas, returning to Puerto Rico months after Maria hit still holds a certain level of shock and concern. And he’s not the only one to harbor those worries: Outfielder Eddie Rosario and right-hander Jose Berrios, also both Puerto Rican, joined Vargas on a journey that started back in September.

“The most difficult days,” recalled Vargas about when the players first learned about the hurricane, “We’re not even thinking about the game … You know, our heart and our mind is back in Puerto Rico.”

And that focus influenced the players’ next steps. They joined Ramos in pushing for support for their native island.

“I appreciate Minnesota Twins. I appreciate Jet Blue and all the people like playing ball with us and try to help us help our people over here,” Vargas said.

Vargas plans to continue to push for relief in Puerto Rico. That, while the slugger also delivers his own homerun of hope by simply showing up to a holiday celebration.

“When I saw my island, it was like I almost cried in the airplane. I was like, ‘Oh, this is not my island. I gotta deal with that.’ And I just came right away to my city, see what I can do for my people. And that’s what I did,” he said.

Minnesota Twins designated hitter and first baseman Kennys Varga is something of a Puerto Rican hero, returning to his home after Hurricane Maria to offer hope and help. (Photo: KARE 11)

To support the efforts of the Coalición de Boricuas en Minnesota, you can donate through the organization’s fiscal agent, Impact Lives, at: https://www.impactlives.org/donate/52-support-an-event.html. Please specify your donation is for the “Puerto Rico Hurricane Relief Fund.”

OTHER MINNESOTANS MAKING A DIFFERENCE IN PUERTO RICO

There’s no question Minnesotans have stepped up during this time of crisis in Puerto Rico. And while the following is by no means an exhaustive list, KARE 11 wanted to offer the following examples:

According to its website, Medtronic – which has its operational headquarters in Minneapolis – launched a relief effort shortly after the hurricane hit. The company has shipped water, generators and boxes of food to the island. And the company specifically supported its 5,000 Puerto Rican employees with free gasoline, daycare and laundry services.

Xcel Energy has sent more than 200 workers to Puerto Rico, most of whom are from Minnesota and the Upper Midwest. The utility company has rotated workers in on three-week deployments, during which they’ve been largely based in the mountainous, remote region of Caguas.

And Minneapolis-based Katadyn North America says it’s teamed up with World Hope International to raise funds for water filters to be sent to Puerto Rico. Katadyn – which manufactures the filters – says it has already sent several hundred filters to the island. To support this effort, just go to: https://www.worldhope.org/give-katadyn