Twelve-year-old Nathan Casey had the courage to sit down with Jana Shortal and talk about losing his father to suicide. 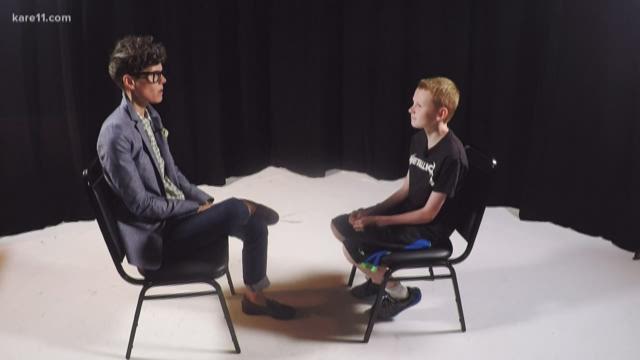 A lot has been said in the last few weeks about suicide.

The CDC report out telling us that overall the rate of suicide is up 30 percent across the board in the last 20 years, news of the rich and famous dying by suicide, and think pieces as to why that is.

But a story is missing that is important to tell.

It's the story from the children who have lost a parent to suicide.

Twelve-year-old Nathan Casey is one of those kids, and Monday he sat down with Jana Shortal on Breaking the News for a Q & A.

Jana: Were you mad?

Nathan: I wasn't mad, I was just upset.

Jana: Did you ever get angry?

Nathan: Only once, for a very short period of time before I realized what happened, what was going on and why he did it.

Jana: What did you realize about why he did it?

Nathan: Because he had depression. Suicide is never someone’s fault. People need to learn that suicide isn’t telling someone that they hate you. It’s just them trying to get their pain out because they have all that pain locked up and they feel the only way to get it out is by committing suicide.

Jana: Does it matter to you that your Father died by suicide as opposed to getting in a car accident?

Jana: Do you still love your dad?

Jana: Do you ever want to be a dad?

Nathan: Yes. I would like a family and I would like to keep my family the way that it should be and not leave them early.

Nathan is an incredible boy with his heart and ability to talk so openly about losing his father. He has an incredible mom who likely deserves a lot of credit for that, as well as a faith community and a group of counselors.

Some of them are with Youth Grief Services of Fairview, which is an organization that provides free grief counseling to kids and their families after a death of someone close to them.

They are angels among us in this community and if you would like to learn more or donate to their organization, you can visit this page and designate your gift to "Youth Grief Services."

Editor's Note: This story was originally published in June 2018.