A tale of friendship: Best friends survive crash in Brainerd

With an unbreakable bond, two friends survived a fiery crash at Brainerd International Raceway this past weekend. 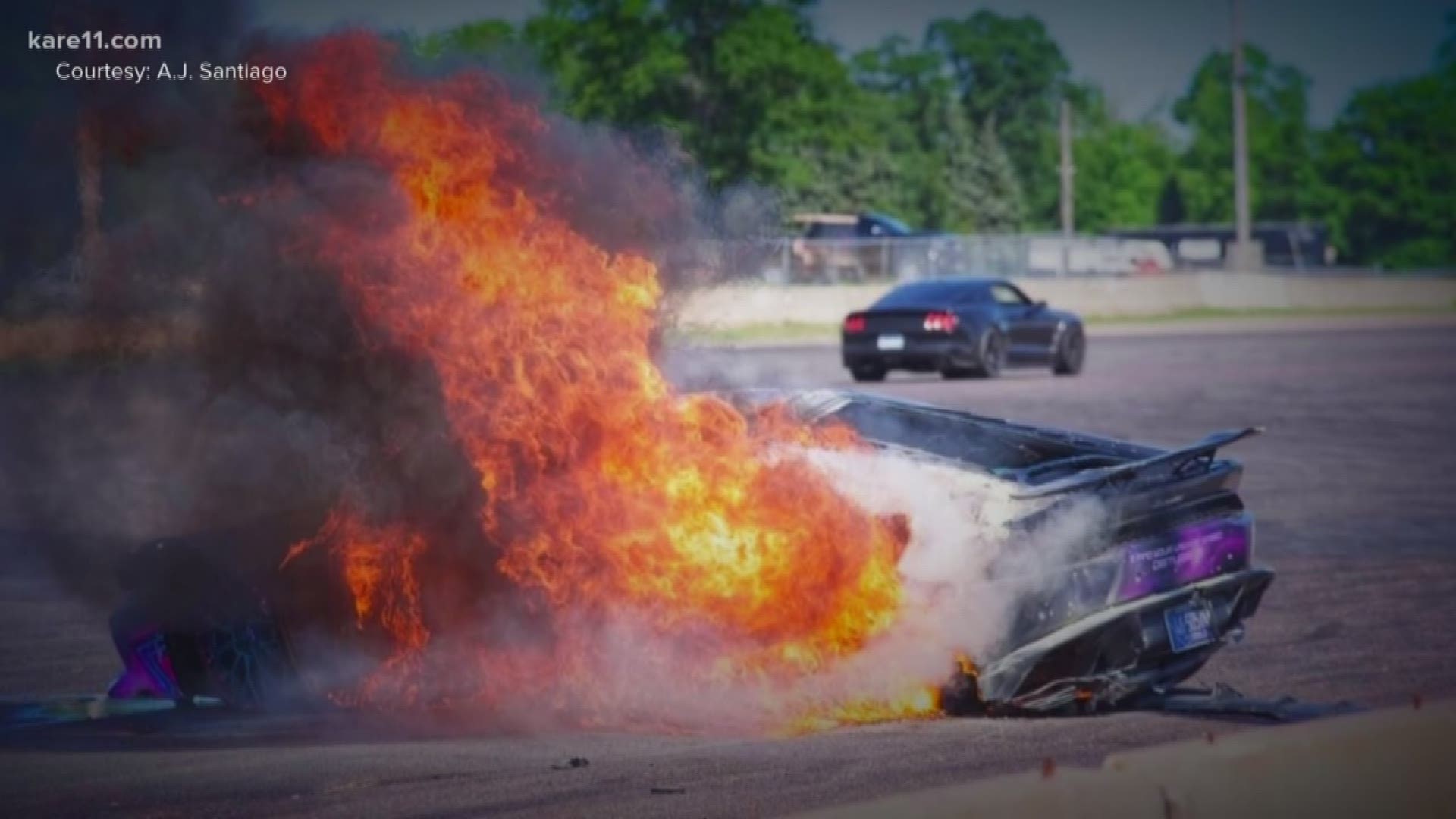 MINNEAPOLIS — Coy Christmas and AJ Santiago bonded over a mutual love of the Nissan GT-R.

It was an instant friendship.

The two had never met until a 2013 encounter at Brainerd International Raceway, when they realized they were driving the same car. They became race buddies, took trips together, attended car shows and forged friendships with each other's families, even as Santiago lived 1,500 miles away in Phoenix. When they get together these days, they can talk about cars all day long, and with their natural give-and-take and good-natured sense of humor, they interact almost as seamlessly as siblings.

At no point during their friendship, which has now lasted the better part of a decade, did Christmas and Santiago ever think they'd land in a hospital room together.

"It's hard," Christmas said, "to think that seven years later, he's literally pulling my butt out of a car to save my life."

It was just a test drive.

This past weekend, Santiago flew in from Arizona and Christmas drove 125 miles from Superior, Wisc., for another event at Brainerd International Raceway called the Powercruise. This was no high-speed race; it was more low-key and included a charity event for cancer. On Friday, Christmas and Santiago had managed to raise about $4,000 in donations by letting people take a spin in their Lamborghini, which Christmas acquired a few years ago. The two have toured the country in the vehicle. Whether they're traveling to Miami, Colorado or Minnesota, the Star Wars-themed sports car always draws a huge crowd at shows because most people have never seen any vehicle quite like it.

"Everyone around here," Christmas said, "knows that car."

On Saturday morning, the second day of the event, Christmas and Santiago reworked the spark plugs in the Lamborghini. Before taking any passengers for the day, they decided to take the car out on the streets to see how it rode. Everything seemed fine. Then they went for a ride on the actual Brainerd International Raceway track, showing off some modest speed but nothing even remotely close to an actual race. Coy drove and AJ rode passenger. There was nobody else in the vehicle.

They were coming out of Turn 9 into Turn 10 when the Lamborghini somehow lost control, either due to a mechanical error or maybe an obstacle on the tire.

"The wheel just cranked to the right," Christmas said, "and I looked at AJ and said: 'We're gonna hit the wall.'"

They slammed into concrete.

"It was extremely violent," Santiago said. "A huge fireball came into the cockpit. That's what burned the left side of my head and neck and the right side of his body."

The car rolled before coming to a stop. Santiago could feel the heat and smell the fire all around the Lamborghini.

The car is on fire, Santiago told his best friend in the driver's seat. We need to get out.

As a stunned crowd at Brainerd International Raceway gazed on from a distance, some spectators and first responders began to rush toward the fire.

But there was nobody closer than Santiago.

"When I opened the door and he was unconscious, honestly, the first thing I thought is that he was dead," Santiago said. "I was absolutely scared, I was terrified."

Christmas, whether he knew it or not in his unconscious state, was in good hands.

AJ Santiago spent more than a decade in active military duty, serving two tours in Iraq as a helicopter pilot in the United States Army flying Black Hawk choppers. During a mission in 2007, enemy troops ambushed his wingman and shot down the aircraft. Santiago, the pilot in command, found his wingman's aircraft and rescued nine survivors. He was trained to run toward the danger without hesitation.

Santiago recalled those memories this past weekend, when he saw Christmas bleeding profusely from his head in the seat next to him.

"I was trained how to react," Santiago said. "Just because you survive the crash doesn't mean you'll survive the fire."

With the roof of the car collapsing on Christmas and fire on the rear driver's side, Santiago managed to grab the door and drag Christmas to safety, despite the fact his friend weighs significantly more than him. Santiago was working on adrenaline and instinct. He held his hands on his friend's head to stop the bleeding and handled the wound until first responders arrived.

"It was not a one-person show," Santiago said. "It was a team effort."

Emergency personnel, who were already on scene for the event, rushed Christmas to Essentia Health-St. Joseph's Medical Center in Brainerd. Christmas and Santiago would later reunite at the hospital. Christmas said he was sorry, but Santiago said there was no need to apologize. There is no animosity between the two and no blame on either side. They believe they survived because they trusted each other and because their friendship was too strong to break.

"AJ's got the experience. He's a war hero. He's flown Black Hawks and he's not afraid to run into danger," Christmas said. "You can't be taught to do it any other way. He did it textbook."

After a brief stay on Saturday, Christmas was released from the hospital and headed back home to Superior. He received 30 stitches in his head and has several bruises, but otherwise he said he's in pretty good shape. Santiago, meanwhile, was transported to Hennepin County Medical Center in downtown Minneapolis. Doctors treated his second and third-degree burns in the Burn Unit, but Santiago doesn't expect to stay past Thursday.

"If this is the price I have to pay for saving a life, then I'll take it," Santiago said. "I'll take it."

Christmas then locked hands with his best friend.

Thanks dude, Christmas told him.

Yep, Santiago responded, with a smile.

Now Christmas and Santiago are already planning their next ride together.

Video of the crash, used in the above story on KARE 11, was provided by AJ Santiago and filmed by Jon Osterman.