Adult nightclub owners have partnered with the US Dept. of Homeland Security in the battle against sex trafficking, cosponsoring a training program for industry workers. 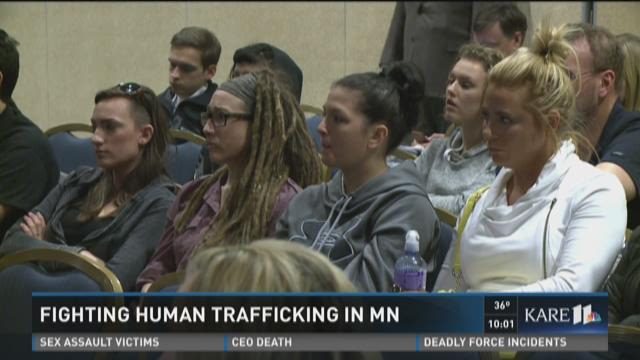 MINNEAPOLIS -- Adult nightclub owners are partnering with federal investigators in the fight against sex trafficking.

The US Dept. of Homeland Security is offering training sessions to help club workers recognize signs of sex trafficking victims, and guard against efforts by traffickers to target performers as potential victims.

"It is a unique partnership, but it’s one that’s worked across the country," Eugene Eugene Paulauskas, the acting deputy special agent-in-charge for Homeland Security Investigations in Minnesota, told KARE.

"And it really serves to get the word out to club owners and people who are working in these establishments, people who will be able to see first hand and identify victims of trafficking in clubs."

Traffickers sometimes recruit in clubs, but more often attempt to get their victims hired by clubs as employees or independent contractors, according to Michael Ocello, the president of VCG Holding Corp., which owns nightclubs in several states

"Human trafficking is a scourge on America today and it’s across every segment of employment that you can imagine," Ocello told KARE. "So we think that every industry should step up and try to educate their people to know what to look for, and how to react."

In 2010 Ocello founded the group Club Owners Against Sex Trafficking, or COAST, with the aim of creating an "army" of employees who know how to detect and report suspected trafficking.

"We have to recognize that we're a potentially high risk business, as are hotels, restaurants and certain agricultural businesses."

He said traffickers are very controlling of their victims, and try to isolate them so that they don't form friendships with coworkers. They also control their key documents, when it comes to the hiring process.

"When a young woman applies for a job the first thing we’re looking at is, do they control their identification? Because a lot of times traffickers will hold that identification as a means of controlling that person," Ocello explained.

"Does that person get to speak? Or does the trafficker seem to want to step in and do all the speaking and kind of control what’s going on?"

Rick's Cabaret International, which owns three clubs in Minneapolis and 46 nationally, required all of its Twin Cities employees to attend a training seminar put on by COAST and Homeland Security.

"We vet people rather intensely before they work for us, whether on an independent level or on an employee level," Kevin Arrowood of Rick's Cabaret International told KARE. "So we don't have a huge issue with recruitment in our clubs."

But he said the training is something that can help his employees recognize possible trafficking victims anywhere they are, not just on the job at a nightclub.

"If you can recognize an indicator, wouldn’t you want to make a difference and say something? That’s the backbone behind this. It has nothing to do with the adult industry per se, but it has very much to do with just humanizing society."