The Super Bowl will close off parts of downtown Minneapolis normally used by the city's homeless population, so agencies are ramping up outreach efforts on the streets. 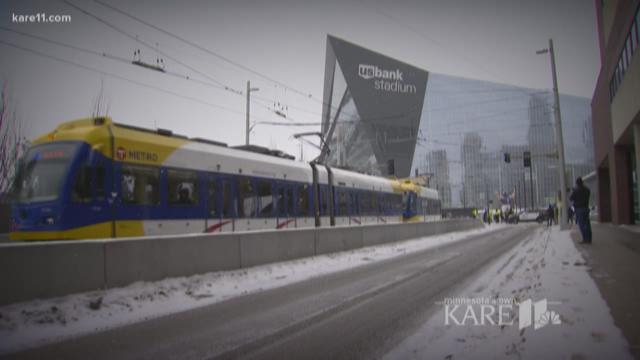 MINNEAPOLIS -- Super Bowl 52 will draw hundreds of thousands of people to downtown Minneapolis, and activities surrounding the game will close off parts of the city's core now used by homeless.

Agencies that serve that population are ramping up outreach efforts, to help those who may feel squeezed out by the nation's premiere sports event.

"There are going to be a lot of places where people have traditionally been able to go to get warm, to socialize, even to use the restroom -- basic facilities those of us that are housed just take for granted," John Tribbett, the street outreach manager for St. Stephen's Human Services, told KARE.

"A lot of those spaces will be occupied by media and other groups coming in to do certain events."

He said one concern is that homeless persons with mental health issues may be distressed by the sudden influx of tourists and revelers, and the noise connected to special events. St. Stephen's will ramp up efforts to locate people in need of help, and to intervene with social services solution in hopes of sparing those persons from incarceration.

Downtown visitors who encounter a potentially homeless person in need of shelter are urged to call the Safety Communications Center at 612-332-1111, rather than calling 9-1-1. That phone line is staffed by people coordinating outreach efforts.

Tribbett also pointed out homeless people shouldn't feel they can't walk around freely and participate in the public events happening along the Nicollet Mall and other areas near US Bank Stadium.

"These are citizens of our city and they have every right to enjoy the public and private spaces that anyone of us has to right to enjoy," he remarked.

Tribbett cited media reports of homeless being cleared from the streets at past Super Bowls in other cities, but doesn't expect that to happen in Minneapolis.

"Everything I'm hearing from authorities is that there is not a concerted plan to move homeless folks out of downtown Minneapolis to protect the camera's eye from seeing homeless people on the street," Tribbett explained.

The interruption of transit downtown will another issue for homeless persons to deal with on Super Bowl Sunday. Hundreds of persons take shelter for the cold on the light rail transit lines, and those trains will stop early on the morning of the big game for security purposes.

"There will, however, be buses that will be available, and transit on the buses will be free, at least that’s what’s been reported to us," Tribbett explained.

"Those individuals who are using transit will have a place to go that’s warm – not idea, not what we want to see in our city, but some place that will at least keep them alive and safe."

St. Stephen's also runs a shelter that holds at least 50 persons at First Covenant Church, which is so near to US Bank Stadium it will be inside the fenced in security perimeter. That shelter will be moved temporarily to St. Olaf Catholic Church about six blocks away.

Tribbett said the disruptions from the Super Bowl, and the visibility of homeless persons in the area, will help raise awareness.

"It’s really a great opportunity to become educated about the issue of homelessness, and what it really looks like in our community," Tribbett said.

Homeless and highly mobile persons in St. Paul will be affected because the motel vouchers they normally use will be suspended for 10 days surrounding the Super Bowl. That's because the game will absorb most available hotel rooms.

Ramsey County and other agencies have been working to find replacement shelter for the families that normally use those vouchers.

"We've been planning for that and working with other providers, faith groups and some other nonprofit shelters in the area, that are going to provide the space that would've been in hotels and motels during that 10-day stretch around the Super Bowl," Ryan O'Connor, deputy manager of Ramsey County Health and Wellness, told KARE.

He said families entering the system won't have to do anything different than they normally would do to apply for aid.

"On our end, our work may change, and it may change where you have to sleep for a few nights, but if you’re calling in as a resident we want you to get the same level of service. it should feel seamless during that time period," O'Connor explained.

Many have complained about the impact of the Super Bowl on the homeless, but O'Connor sees it as an opportunity enlist other is the ongoing battle to end homelessness.

"Ramsey County and Hennepin County and Minneapolis and the school districts, we’re all doing what we can to ensure that our families are served," he remarked.

"But it’s good to frustrated, turn it into something productive, volunteer, be a part of donating to the groups that serve."

Bold Hope in the North

The Super Bowl Host Committee has been coordinating with social service organizations and government agencies, to prepare them for potential disruptions.

The Host Committee is also partnering with faith groups for the Bold Hope in the North fundraiser Jan. 28 at Westminster Presbyterian Church. The event, organized by Downtown Congregations to end Homelessness, will raise money for Emergency Rental Assistance Program.

That program is designed to help families at risk of becoming homeless.