The Appleton International Airport said on Twitter that when a flight from Minneapolis landed, a passenger's carry-on bag began smoking. 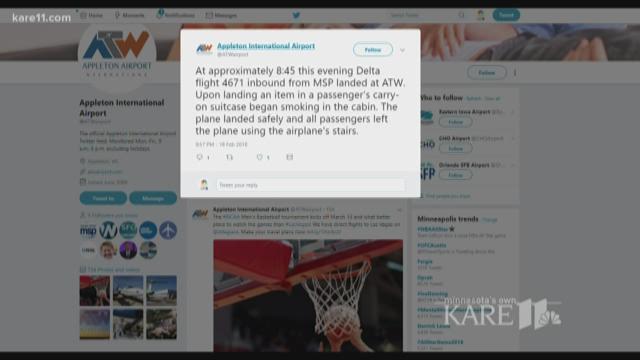 APPLETON, Wis. - An electronic in a passenger's carry-on suitcase began smoking upon arrival in Appleton, Wisconsin on Sunday night.

The Appleton International Airport said on Twitter that when a flight from Minneapolis landed at about 8:45 p.m. Sunday, a passenger's carry-on item began smoking in the cabin. The plane landed safely and all passengers exited using the stairs, according to the airport.

The flight was operated by Delta partner SkyWest. They provided KARE 11 with a statement Sunday night, saying,

"After a routine landing in Appleton, Wisconsin, SkyWest flight 4671 operating as Delta Connection from Minneapolis to Appleton, detected a smoky odor onboard. All passengers safely deplaned at the gate, where officials determined a customer's electronic device as the source."

The airport says the Greenville Fire Department and Airport Public Safety responded to the scene.

"We are thankful for the fire department, airport staff and the Delta crew for their quick response," ATW tweeted.