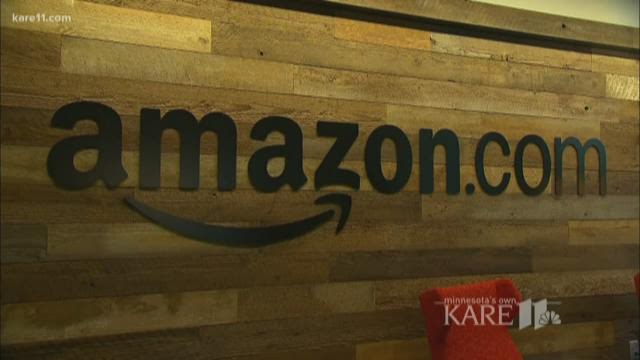 MINNEAPOLIS - The Twin Cities missed the cut for Amazon's second headquarters after the e-commerce giant announced it narrowed its list of more than 200 proposals to just 20.

But, it’s not over if you ask Gene Munster, a venture capitalist and partner of Loup Ventures in Uptown Minneapolis. He’s recently shared predictions Amazon will buy Target and believes Minneapolis-St. Paul missing the company’s short list is further proof.

“If they would build a second headquarters, that would essentially be redundant. Think of it this way, they can essentially take over the assets of Target here in Minneapolis as a better way to add a second headquarters or it might be at the time a third headquarters,” said Munster. “We think this year is a 60 to 70 percent chance something gets announced between Amazon and Target, but longer term over the next three years it’s 90 percent and that reason is because Amazon needs Target to be a key player in offline retail in the US, it’s a perfect partner for them.”

Munster believes Amazon is looking to beef up its brick and mortar footprint beyond Whole Foods and says both stores value innovation and share the same demographic.

“They are going to need a lot of this great retail talent in the Twin Cities over the long haul and it would make perfect sense for them to have a spot here,” said Munster. “There are really two places that make the most sense for Amazon to announce a second headquarters, somewhere in Arkansas, if they wanted to poach talent from Walmart or in the Twin Cities. The fact the Twin Cities is not on that list is a strong indication Amazon has bigger aspirations of working with Target in the future.”

The Minnesota Department of Employment and Economic Development Commissioner Shawntera Hardy acknowledges steep competition but cautions Amazon's announcement can't be seen as a disappointment because the force assembled behind the project will still boost our economy.

“We put together a very diverse set of individuals to come to the table, from education to the public and the private, transportation, and we have a team now. We already know over the next 10 years in terms of finding workers and new opportunities we are going to have to do the work anyway,” said Hardy. “We have to continue the course because we have a strong economy and if we want to keep it that way, we have to keep making those investments.”

Some Minnesota lawmakers also weighed in, GOP Senate Majority Leader Paul Gazelka R-Nisswa said taxes and regulations will make it difficult for companies like Amazon to compete in the marketplace.

"Failure to attract up to 50,000 new Amazon jobs to Minnesota should be a wake-up call. We need to make changes to our tax code to help individuals keep more of their hard-earned money and attract new jobs, or risk losing out to other states,” said Gazelka.

KARE 11 reached out to Target and Amazon for comment. We will provide updates when we receive a response.

Here are the cities in the final 20 for Amazon: