Two South St. Paul organizations are teaming up to stop bullying in schools. 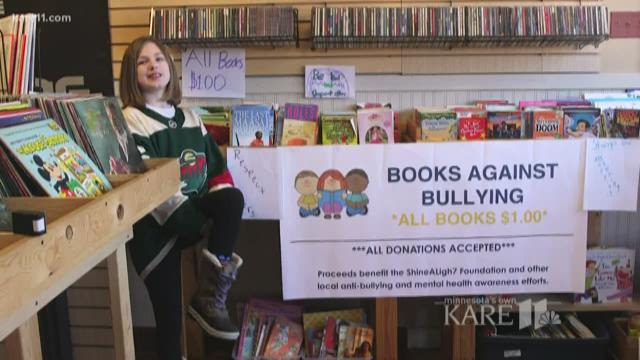 Maddie Kegley, 10, started Books Against Bullying this summer as a way to raise money for the Shine A Ligh7 Foundation. The nonprofit is focused on anti-bullying efforts, suicide prevention and mental health awareness in youths and young adults.

"Because kids deserve to be treated all the same and not to be bullied," said Kegley, a fifth grader at Lincoln Center Elementary. "It kind of makes me feel disappointed in the person that is bullying them."

Maddie and her mom, Amanda Kegley, collected book donations and set up a book sale in their driveway. They raised more than $600 for the Shine A Ligh7 Foundation. They followed up that fundraiser with another book sale at the "On the Road Again" festival in October—raising more than $1,300. This time, Books Against Bullying gave 75 percent of the money to Shine a Ligh7 and 25 percent to a local family who recently lost their daughter to suicide.

"I'm really proud to be her mom," said Amanda Kegley. "I battle my mental health on a daily basis. I've been through a lot of struggles this year and that's kind of opened a door for Maddie and I to talk about mental health and things like that."

Once again, Maddie is expanding her anti-bullying efforts with a storefront at 609 Marie Avenue in South St. Paul.

The space is headquarters for another new organization: Music Unites Against Bullying.

Tim Leonard is the founder of Music Unites Against Bullying. (Photo: Ben Garvin)

"When I took over the store, there was so much space and I had all these build-outs here and I had nothing to put in them. I was sitting there thinking, 'What can we do with this?' And then it just clicked," said Tim Leonard, head director of MUAB.

Leonard said MUAB started in the fall when he heard about recent suicides in the area. He planned a concert that ended up raising $1,000 for South St. Paul Public Schools.

"The response from the community... it was like, 'Okay, this is much bigger than just one event,'" Leonard said.

MUAB just moved in to the new space. Leonard said they plan on offering music lessons and other programs starting in January. There will be a fee for lessons. Leonard said they will start by giving drum and guitar lessons; he is still trying to find a piano teacher.

Leonard hopes on top lessons, jam groups can form and those kids can learn how to play in front of an audience.

"Music saved my life. If I did not have music... because I was bullied growing up, as well. But drumming was my escape. If I didn't have that, I can't say that I'd be here today," Leonard said.

After hearing about Books Against Bullying, Leonard offered Maddie a space at his shop at 609 Marie Ave. in South St. Paul.

All books are $1. They also take book donations. Proceeds benefit the ShineALigh7 Foundation and other local anti-bullying and mental health awareness efforts.

Leonard said they are still working on store hours. You can contact Books Against Bullying through their Facebook page.

MUAB is still looking for volunteers to fill positions on their Board of Directors. You can reach Leonard at 651-503-2709 or on the MUAB Facebook page.