About 250 girls from across the state gathered in Minneapolis on Sunday afternoon to pitch their mobile phone apps. 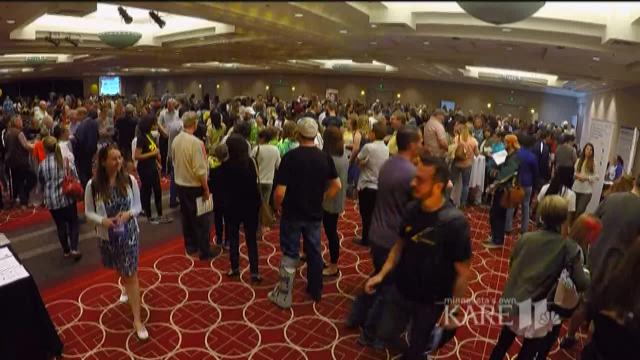 "They're avid consumers of technology but a lot women are not involved in the creation of technology," said Shawn Stavseth, co-founder of Technovation[MN]--an initiative of the nonprofit Code Savvy.

Stavseth is hoping to help close that gap.

About 250 girls from across the state gathered in Minneapolis on Sunday afternoon to pitch their mobile phone apps. Technovation[MN] hosted its fourth Appapalooza event at the Minneapolis Convention Center.

Girls ages 10-18 spend 12 weeks learning how to create mobile phone apps. They then pitch them at Appapalooza.

"We thought since the whole point of Technovation is to help fix world problems, it would be nice to give back to organizations for women," said Kristen Watkins, a freshman at Lourdes High School in Rochester.

"I feel like we need more girls from Minnesota and Rochester to get more involved in tech. So it's not just a male-dominated field," Abdullahi said.

Technovation[MN] welcomes all girls and puts a lot of resources toward recruiting from low-income, diverse communities.

According to Code.org, out of the 2015 computer science graduates in the nation about 17.5 percent were women.

"There are a lot of girls in middle school who are really excited in STEM fields and by high school, they're not as excited," Stavseth said. "So I want these girls as they go away to know that there's a community to support them."

Each group had four minutes to pitch their apps in one of 13 different rooms to a panel of judges. Seven middle school and two high school teams advanced to the semi-finals. There's a chance to make it all the way to the global finals and pitch to venture capitalists in Silicon Valley.

Since 2014, over 650 girls on 140 teams from 40 schools throughout Minnesota have participated in Technovation[MN] and attended Appapalooza. Technovation[MN] participants have created more than 160 mobile apps.