Senator Al Franken made it clear he's resigning from the US Senate, but former Minn. Gov. Arne Carlson thinks Franken should stay put until there's a full investigation into the sexual misconduct allegations that have been made against him. 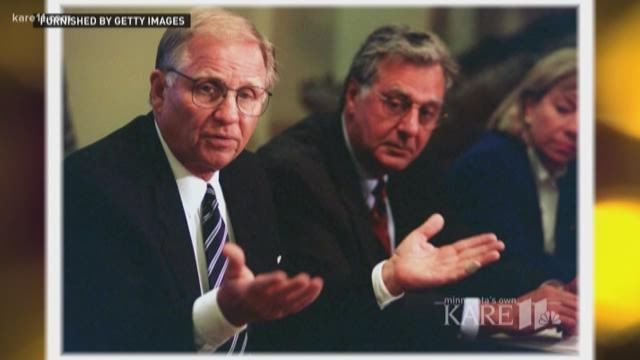 MINNEAPOLIS -- Former Gov. Arne Carlson asserts that Sen. Al Franken shouldn't leave the US Senate, but instead stay long enough for the Senate Ethics Committee to investigate the sexual harassment claims against him.

Carlson made the point in a blog post on Sunday, and spoke to KARE from Florida Monday.

"That process was bypassed, I would argue, largely because they wanted to focus on the outcome of Tuesday’s election," Carlson said.

"And I think increasingly people are realizing that Franken was sacrificed for a political reason, and that’s not the way justice should work."

Franken announced his resignation last Thursday in a speech on the Senate floor, saying he could no longer effectively represent Minnesota and at the same time be engaged in an Ethics Committee investigation into the accusations brought by eight women.

It came a day after dozens of his Democratic colleagues in the Senate, led by Sen. Kirsten Gillibrand of New York, called on Franken to voluntarily step down, based on establishing "zero tolerance" for sexual misconduct in the Senate.

Franken had been on the defensive since Nov. 16, when Leeann Tweeden, a Los Angeles radio personality and former model, accused Franken of trying to forcibly kiss her in 2006 while they were rehearsing a skit on a USO tour entertaining troops in Afghanistan.

On the same day, she released a photo of Franken mugging for the camera on a military plane, as he appeared to have his hands on the front of Tweeden's flak jacket as she slept.

Since then seven other women have come forward to say Franken made unwanted advances, trying to kiss them or, in some cases, touching them inappropriately during photo ops.

It was also widely speculated at the time that Senate Democrats needed Franken to leave, rather than fight the accusations, so they could stand on high ground when they assert Alabama Republican senate candidate Roy Moore isn't fit for office based on allegations about past conduct with teenage girls.

"He was very clear and he said on the Senate floor he’s going to resign, and he’s told me that personally," Sen. Klobuchar told reporters Sunday. "I do not anticipate that that will change."

Most of the pundits have moved onto the question of who Gov. Mark Dayton will appoint to fill Franken's seat until the special election is held in November of 2018. But Carlson said Dayton should hold off on that announcement for the time being.

"The whole thing could be avoided if Governor Dayton would simply announce that there will be no appointment until such time as due process has occurred in the United States Senate," Carlson asserted.

Carlson, who served as governor for eight years and state auditor for 12 years prior to that, always ran as a Republican. But he endorsed Barack Obama for president in 2008, and supported Independence Party candidate Tom Horner in the 2010 gubernatorial election.

He said he's still bothered by the fact that Tweeden, the first accuser, appeared to be getting along fine with Franken in photos of the two taken at a USO celebration in 2009, three years after the alleged kissing episode.

"The name that has surfaced is that of Roger Stone, and the possibility that he coached Tweeden to say what she did," Carlson said.

Stone, a Republican political consultant and strategist, tweeted that Franken would be having his "time in the barrel" hours before Tweeden dropped her bombshell Nov. 16. Actor Tom Arnold, one of Tweeden's colleagues at KABC radio, went on Twitter to accuse Stone of prepping Tweeden.

Others have pointed out that Tweeden, as contributing panelist on Sean Hannity's show on FOX in 2011, called on President Obama to turn over his birth certificate and praised Donald Trump for raising the issue.

"And that’s why I want to know more about the role of Roger Stone in whether it was engineered by anybody connected by Donald Trump. That's why the Senate Ethics hearing would be essential to getting to the truth."