At what age is it okay to leave a kid in a car? Turns out it's a gray area...

After a fatal fire in Fridley that claimed the life of a 6-year-old girl, parents question at what age is it appropriate to leave a child unattended? 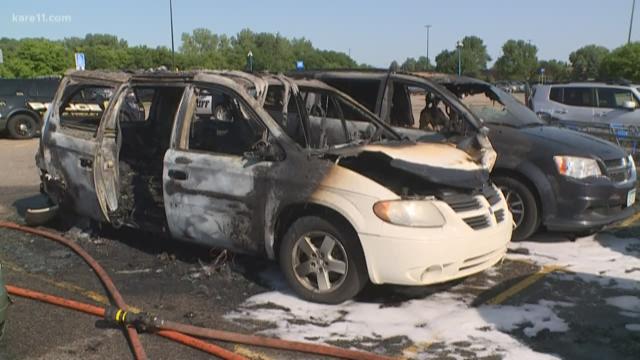 FRIDLEY, Minn. — We've all heard the dangers of leaving kids in hot cars, but the danger two little girls found themselves in Tuesday morning in the Fridley Walmart parking lot is something no parent could have seen coming.

"They both had burns over their bodies and suffered smoke inhalation," Fridley police Lt. Jim Mork says.

Police say the girls, ages six and nine, were left in the car by their mother, who went into Walmart to do some shopping.

“She was inside somewhere between 45 minutes and an hour,” Mork says.

While she was inside, police say the van parked next to the girls caught fire.

Within minutes those flames spread to their vehicle where the girls were both seated inside.

When we shared the story online the comments came pouring in, nearly a thousand of them on Facebook, from parents who both condemned and condoned this mother’s actions of leaving the two girls in the car.

It got us wondering ourselves, what is the rule?

Well, there isn’t one, at least not here in Minnesota.

According to KidsAndCars.org, a children’s safety group, 19 states have specific laws against leaving kids in cars, Minnesota isn’t one of them.

Instead of having a specific law, Minnesota law relies on the broader definition of “child neglect and endangerment.”

Under this broad law, charges can be filed against a parent or guardian based on what’s “appropriate to the child’s age” but the law doesn’t specifically say what that age is.

Attorneys say the law is vague so that it can take into account a variety of factors, such as the age of child, the maturity level of the child, how long they’ve been left in the car, etc. etc.

There are tons of factors, bottom line, every case is different.

While Minnesota doesn't put an age on the issue, other states do.

In California, it's six, any child younger than that can't be left in a car alone.

In Florida, it's the same, but their law says it's only illegal if the parent is gone longer than 15 minutes.

In Texas, it's illegal to leave a child under seven, Maryland its eight, in Connecticut it's twelve.

However, in some states say it's okay for a parent to leave their child in the car if an older sibling is in the car with them.

So, it makes sense  parents would disagree on the topic, with each state having its own way of dealing with it.