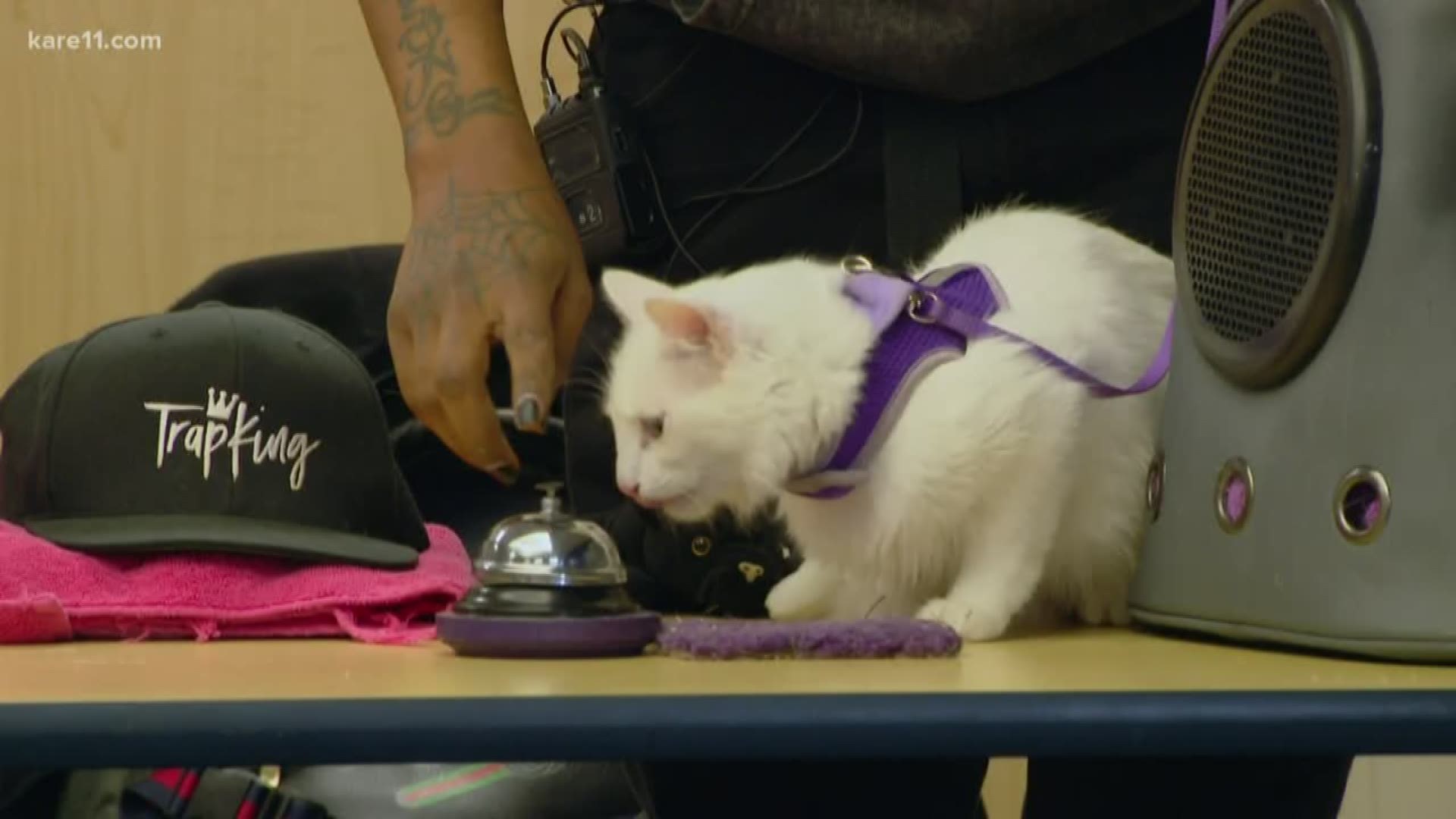 Davis had a table with a humane cat trap on top of it. Next to the trap, his pal Damita Jo sat in her cat-carrying backpack. Next on the agenda, some rap music about the exact mission Davis is on. To spread the word about trapping, neutering and returning--TNR.

At the intersection where rap meets cat, stands Davis, a former rapper based in Atlanta.

"It was going to be one of those deals where it was like three months until I went on another tour," Davis said. "I was thinking and looking on Craigslist for something to do before I went on my next tour. On Craigslist, I found someone looking for litter scoopers at a rescue."

The truth is, Davis has always loved cats. He said he has always been a cat-person. So working with cats sounded hardly like hard work.

"I came in and interviewed," he said. "I did horribly. Horrible. They had cats in the room and I'm just grabbing them and picking them up. They're asking me questions and I'm just picking cats up and cuddling them."

Talking about this memory, Davis smiles and gestures picking up a cat and snuggling it close.

"They were like, 'okay, look. We're going to hire you but you did horrible in this interview,'" he explained. "'But we've never seen a guy like you handle cats like that.'"

It was only a matter of time until the temp gig became Davis' life. Now he travels all over the country with his sidekick Damita Jo in the backpack. He is famous in the cat-rescue community for going to places and educating people about the proper and humane ways of trapping, neutering and returning.

"I really want to show young men, especially of color that you can volunteer, rescue cats and it doesn't make you uncool or crazy," Davis said. "One of our main statements for TrapKing is that you don't lose cool points for compassion."

Davis has made this his life work because of what the shelter said to him all those years ago. About how they've never seen "a guy like him handling cats like that."

"I think a lot of it has to do with hyper-masculinity in the black community," Davis responded when asked why he thought there were fewer people of color in the cat-rescue world. "I remember growing up and most of the guys had to have a tough looking dog, a mean dog, never a cat."

RELATED: Study says cats react to sound of their own name

So he decided to crush that stereotype with Damita Jo. With her, he showed the kids at Earle Brown elementary that compassion is still cool. Something we should all aspire to have.

"It can stick with you for life-- it stuck with me," he said. "It stuck with me for cats because the abuse the neighborhood I grew up in, it was all pretty rough. If it wasn't for cats and animals showing him that compassion, I probably would not have got it, I want to give it to them as well at a young age."

To the tender hearts and open minds, Davis repeated, they too, can be trap queens and trap kings, or in the very least, someone who understands.

"We've got to get rid of the 'crazy cat lady' stereotype," he said. "She's a cool, compassionate trap queen. We need to spread that information. When you see that cat lady, give her a high-five. Give her a pat on the back. She's probably doing like me, and giving her life to this."

If you would like to hear Davis speak, he will be at the Alley Cat Bash hosted by the Feline Rescue on Saturday, Oct. 19th.

You can also find more information about TrapKing Humane and Davis' work on his website, or on Instagram.