"Barbara Bush was a fabulous First Lady and a woman unlike any other who brought levity, love, and literacy to millions. To us, she was so much more. Mom kept us on our toes and kept us laughing until the end. I'm a lucky man that Barbara Bush was my mother." 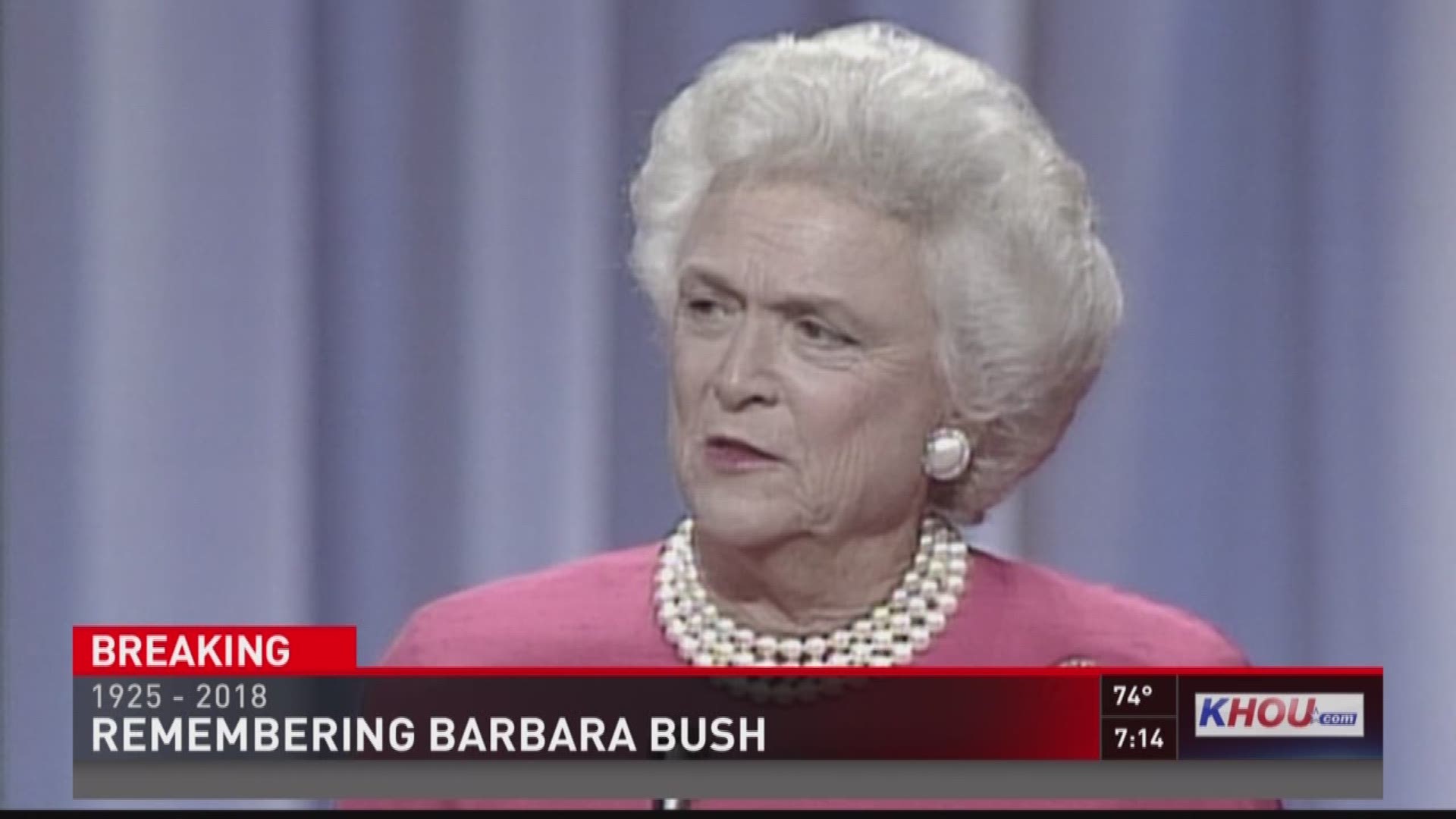 HOUSTON – Barbara Bush, one of the most beloved first ladies in modern history, died at her Houston home Tuesday night. She was 92. Mrs. Bush had been suffering from COPD and congestive heart failure but family members say she was feisty to the end.

Statement by the Office of @GeorgeHWBush on the passing of Barbara Pierce Bush this evening at the age of 92. pic.twitter.com/c6JU0xy6Vc

Mrs. Bush was the down to earth matriarch of a political dynasty and one of only two first ladies to also have a son serve as president.

RELATED: George H.W. Bush: Barbara was the most beloved woman in the world 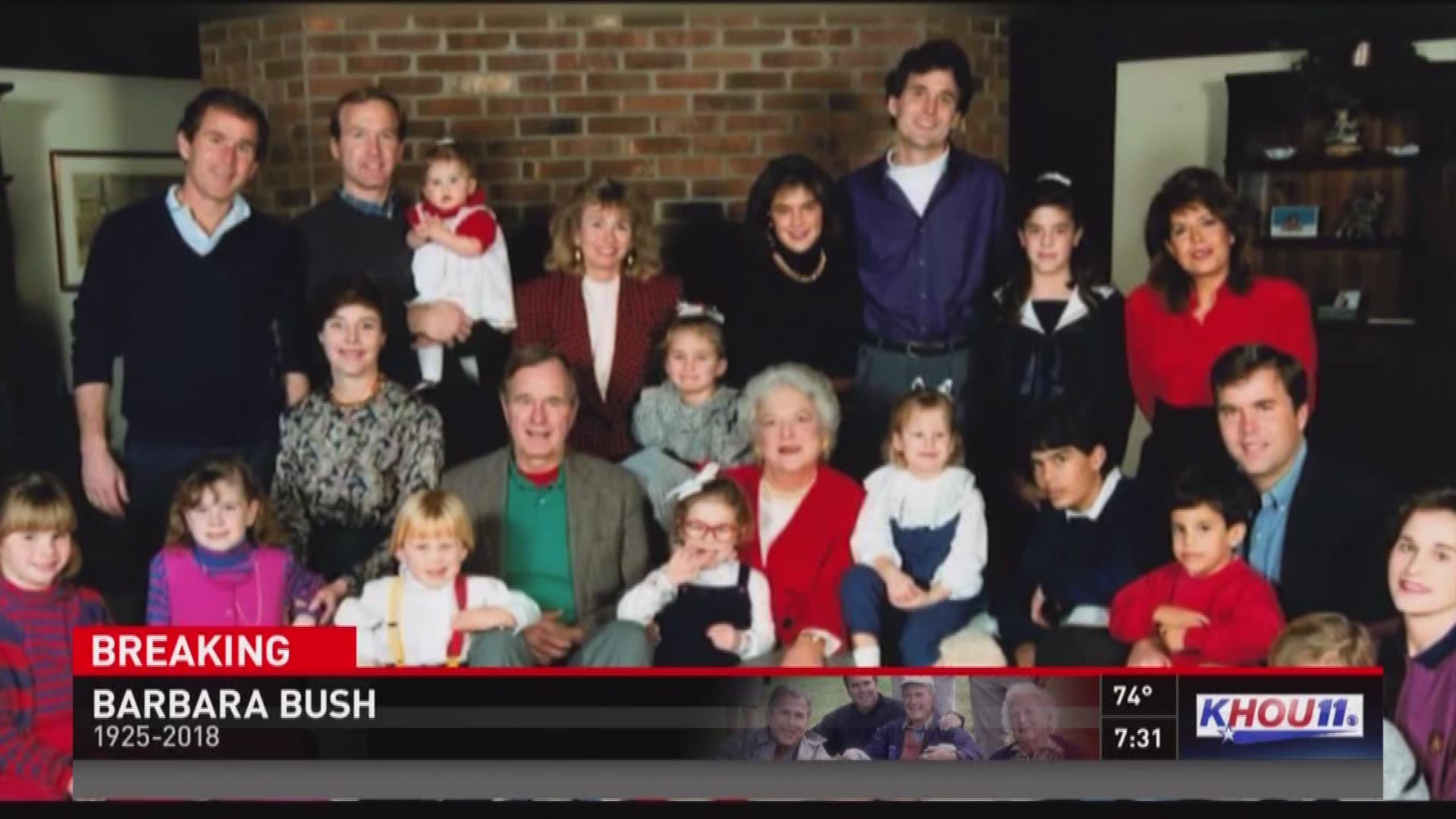 Jean Becker, chief of staff at the Office of George H.W. Bush, released a statement on how the 93-year-old president is doing following Mrs. Bush's death:

"So many of you are asking, 'How is 41?' He of course is broken-hearted to lose his beloved Barbara, his wife of 73 years. He held her hand all day today and was at her side when left this good earth. Obviously, this is a very challenging time. But this will not surprise all of you who know and love him, that he also is being stoic and strong, and is being lifted up by his large and supportive family. He is determined to be there for them as well. He appreciates all the well wishes and support."

Jean Becker, chief of staff at the Office of George H. W. Bush, gave this update on the 41st President of the United States. pic.twitter.com/pjOKi3szVc

"My dear mother has passed on at age 92. Laura, Barbara, Jenna, and I are sad, but our souls are settled because we know hers was. Barbara Bush was a fabulous First Lady and a woman unlike any other who brought levity, love, and literacy to millions. To us, she was so much more. Mom kept us on our toes and kept us laughing until the end. I'm a lucky man that Barbara Bush was my mother. Our family will miss her dearly, and we thank you all for your prayers and good wishes."

All other living presidents were among the thousands paying tribute to the former first lady Tuesday night on social media.

"She touched the hearts of millions with her warmth, generosity, and keen wit," Jimmy Carter wrote.

Bill Clinton called her "a remarkable woman. She had grit & grace, brains & beauty."

"Melania and I join the Nation in celebrating the life of Barbara Bush," tweeted President Trump.

McGrath announced on Twitter Sunday that Mrs. Bush made the decision not to continue medical care after consulting with her family and friends. He said she was "a rock in the face of her failing health, worrying not for herself -- thanks to her abiding faith -- but for others."

In her final days, Mrs. Bush was "surrounded by a family she adores, and appreciated the many kind messages and especially the prayers," McGrath said.

Close family members had been summoned to their Tanglewood home late last week after Mrs. Bush’s health began to deteriorate.

1 / 29
Images of former President George H.W. Bush and his family throughout the years. (Photo: George Bush Presidential Library and Museum)

The Bushes celebrated 73 years of marriage in January, the longest in presidential history.

"I am still old and still in love with the man I married 72 years ago," Mrs. Bush told Smith College Magazine earlier this year.

And theirs was a love story for the ages.

They met as teenagers at a school dance when she was only 16 and he was 17.

"After the dance, [he] walked me home and, in front of the world, leaned down and kissed me on the cheek," Barbara Bush wrote in her 1994 memoir. "I floated into my room and kept the poor girl I was rooming with awake all night while I made her listen to how Poppy Bush was the greatest living human on the face of the Earth."

“They became engaged a year-and-a-half later, just before he went off to war as a Navy torpedo bomber pilot,” according to the official White House biography.

RELATED: George and Barbara: A love story for the ages

During their long-distance relationship, they shared love letters across the miles. She called him Poppy. He called her Bar.

"I love you, precious; with all my heart," he wrote in a letter from 1943. "And to know that you love me means my life. How often I have thought about the immeasurable joy that will be ours someday."

PHOTOS: The Bushes in recent years

Photos: The Bushes in recent years

But of the war, he wrote, "It is frightening at times. The seriousness of this is beginning to strike home."

And to Poppy, she wrote back, "I really am excited, but scared to death, too. If you hear a big noise up there, don't worry, it's just my knees knocking."

In 1945, those fears were realized when she received a letter that her fiance's plane had been shot down. It would be three desperate days before she learned he had survived and been rescued while floating in the Pacific Ocean, according to her memoir.

After his brush with death, the future president returned home on leave to marry Barbara.

“I married the first man I ever kissed,” she once said. “When I tell this to my children, they just about throw up.”

The couple had six children, including a future president, a future governor and a little girl named Robin who died of leukemia at the age of 3.

It was during Robin’s illness in the 1950s, when her young mother's hair began to turn white. She later said dyed hair didn't look good on her and credited the color to the public's perception of her as "everybody's grandmother."

As Mr. Bush chased their fortunes in the Texas oil business, he was often on the road, leaving Mrs. Bush to manage the chaos of raising four rambunctious boys and their sister.

1 / 88
KHOU
BROOKLINE, : Former US President George Bush(2ndR) and his wife Barbara(2ndL) sit with unidentified wives and girlfriends of US Ryder Cup team members near the 13th hole 24 September 1999 during the first day of the 33rd Ryder Cup tournament between Europe and the US at the Country Club in Brookline, Massachusetts. (ELECTRONIC IMAGE) AFP PHOTO/Timothy A. CLARY (Photo credit should read TIMOTHY A. CLARY/AFP/Getty Images)

"This was a period, for me, of long days and short years; of diapers, runny noses, earaches, more Little League games than you could believe possible, tonsils, and those unscheduled races to the hospital emergency room,” She told the Washington Post back in 1999.

“Sunday school and church, of hours of urging homework, short chubby arms around your neck and sticky kisses; and experiencing bumpy moments – not many, but a few – of feeling that I'd never, ever be able to have fun again; and coping with the feeling that George Bush, in his excitement of starting a small company and traveling around the world, was having a lot of fun."

Then came the political career that took Mr. Bush from Congress to the UN, to the CIA and the White House, where the love story, obviously endured.

As first lady, Mrs. Bush was known for her signature pearls and classic style. But under the ladylike exterior, she could be tough and feisty, with a quick wit that showed she was so much more than 41’s wife, 43’s mother and “everybody’s grandmother.” She was fiercely protective of her husband and sons, George W. and Jeb, who followed in their father’s political footsteps.

After the White House, she continued a life of philanthropy and public service. She was perhaps best known for her efforts to teach people to read through her Barbara Bush Foundation for Literacy.

It was son's Neil’s own struggles with reading in elementary school that would mold his mother’s lifelong mission. It started when she attended reading day at her son’s school.

“So there’s a reading circle and all the kids have a book and they’re passing the book kid to kid and they passed it to me and I couldn’t read,” Neil Bush told Great Day Houston's Deborah Duncan Monday.

His mother was shocked. She read everything she could about illiteracy and the shocking statistics would spark her lifelong passion to teach others.

The Bushes were honored by the Mensch International Foundation in 2017 for their service to others. The Mensch Award celebrated their commitment to tolerance and human rights.

"I want to speak as one of the proudest sons on the face of the earth," said an emotional Neil Bush, as he spoke on behalf of his parents. "They are always reaching out and helping others, thinking of ways to make this a better world.”

Barbara Bush passed along her passion for public service to her children and grandchildren.

“All of our children are working and serving others in their own way, along with my 17 grandchildren. Last fall, they were helping with hurricane relief and cheering on the Astros in the World Series,” she told Smith College Magazine in January.

Along with philanthropy, the former first lady had a special place in her heart for animals especially her beloved dogs. Millie, a springer spaniel, was one of the most popular presidential pets in history. Mrs. Bush even ghost-wrote a book by Millie, describing a day in the life of 41.

Millie had a litter of puppies during that time and the Bushes kept one of them and named him Ranger. Another, named Spot, was given to George W. and Laura and he, too, would reside in the White House when George W. was elected president.

Mrs. Bush also shared her husband’s love of sports. At Astros games, she was often spotted by her husband's side, rocking a ballcap and keeping score. The couple, he in a wheelchair and she with a walker, received a warm ovation when they threw out the first pitch at the Astros home opener a couple of years ago.

She was using oxygen when she attended Game 5 of the 2017 World Series at Minute Maid Park.

When Houston hosted the Super Bowl in 2017, the Bushes were chosen for the coin toss and another standing ovation greeted them when they were introduced.

In 2018, repeated respiratory illnesses slowly took their toll and Mrs. Bush was noticeably absent when George attended RodeoHouston in March and again at the Astros home opener in early April.

Barbara Bush would have turned 93 on June 8.

In the interview earlier this year with Smith College Magazine, she revealed her secrets for a long life: Good doctors and a great husband.

"I have had great medical care and more operations than you would believe," she told the magazine. "I'm not sure God will recognize me; I have so many new body parts!"

"Also, George Bush has given me the world,” she continued. “He is the best — thoughtful and loving."

Before a funeral service Saturday, Mrs. Bush will lie in repose at St. Martin’s Episcopal Church, a few blocks from the home she and George H.W. Bush built after he was defeated for re-election in 1993.

A motorcade will carry her body through Memorial Park, where she often took walks with her beloved dogs, and on to the George Bush Presidential Library Center in College Station, on the campus of Texas A&M University. There, she will be laid to rest near the grave of daughter Robin.

USAT and the Associated Press contributed to this report.