After his last suicide attempt, Bakula was treated at Hennepin County Medical Center. That's where doctors asked him and 29 other patients with mental illness if they were interested in an alternative prescription – biking. 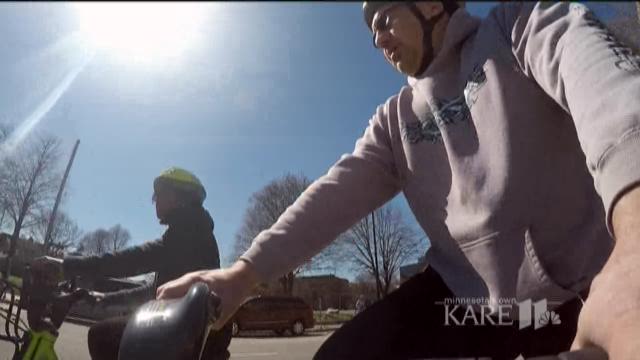 But that is not always the best treatment. In the United States, about 9 percent of adult males reported anxiety or depression, according to the Centers for Disease Control.

Tim Bakula, 48, is among the 9 percent. He says if there is anything below rock bottom, he was there. Twice, he tried to end his life.

“I was on borrowed time there for quite a while,” he said. “In my head, I would just ruminate about everything that has gone wrong in my life and that made my symptoms worse.”

He said his last suicide attempt was on the Franklin Avenue Bridge in Minneapolis.

“That day, I took several sleeping pills. Someone saw me on the railing. Must have called 911. Next thing I know, I was pulled over and wrestled to the ground by two police officers,” he said. “I was angry that day but I am glad I didn’t succeed.”

After his last suicide attempt, Bakula was treated at Hennepin County Medical Center. That's where doctors asked him and 29 other patients with mental illness if they were interested in an alternative prescription – biking.

The hospital has partnered with the bike share system Nice Ride Minnesota. It offers participants a free Nice Ride subscription and access to group rides.

“When I'm riding, all I'm doing is focusing on the road. So it takes my mind off everything that's going on in my life,” he said while riding. “This is just a good opportunity to check out for a half hour, 45 minutes, or an hour, whenever I need just to get some exercise and put all my worries of the day behind me.”

Dr. Woubeshet Ayenew, a HCMC cardiologist  who leads the program, says pedaling is an alternative to prescriptions. He also says people often wonder why a cardiologist is involved with the initiative. But, as he explains, biking can help improve mental and physical health.

“If you are riding more, and regularly, I am assuming you are going to have better physical health,” Ayenew said.

This is the first full year of the program, which started as a test initiative in 2016. Bakula said the answer for him is clear.

"I felt like it (bicycling) was the start of my new life," he said. "I felt like I was reborn with a new attitude and a new energy and excitement for life."

Tim now volunteers at the hospital and will also help lead group rides for others who participate in the program.