Parts of Cedar Lake Trail and Kenworth Trail have been shut down since mid-May for construction of the Southwest LRT. 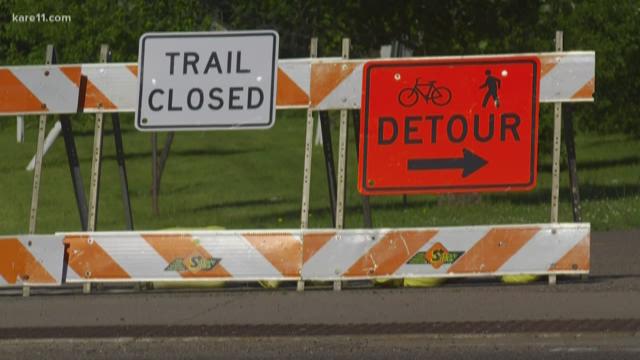 MINNEAPOLIS — There's greenery everywhere and people are itching to get out. It's the sure signs of summer and some Minnesotans are choosing to ignore them.

"I came all the way from the falls around the river through downtown," Thomas Hanson said. "When you come out of downtown, this is your only way coming West."

Hanson said he opted to go around the barricades to shorten his ride.

"There's not actual construction equipment," Hanson said. "Whatever is up isn't moving, and it's a weekend. So I thought, well, maybe I can slip through once or twice."

And standing near the closures, it became evident that Hanson wasn't alone with that idea.

"I think it's premature and when they're going to start the work then get serious," Jake Werner said. "And people will avoid the trail."

Southwest LRT's spokesperson Trevor Roy said this in a statement:

"We are aware that some people have been going around the trail barricades. It is important to remember those barricades are for the public's safety, the contractor is conducting pre-construction activities in that area which includes the mobilization of equipment and other potentially dangerous work. It is also important to remember that being in the designated construction zone is not only potentially unsafe but is also considered trespassing. We urge all trail users to abide by the trail closures and use the designated detours or find other alternate routes to their destinations."

Werner said he understands the work needs to be done and he isn't upset about the closure.

"We've got to develop a transportation system here, there's no question about it," Werner said. "I think in the long run it's going to be a good thing for the future."

If you have further questions about the construction project, you can reach one of the community outreach coordinators here.

Officials say you can also find them at these future meetings for further information.