Buffalo Wild Wings to be acquired by Arby's in proposed deal

Buffalo Wild Wings announced that the deal, valued at approximately $2.9 Billion, would have Arby's take control of BWW for $157 per share in cash, and also take on BWW's debt. 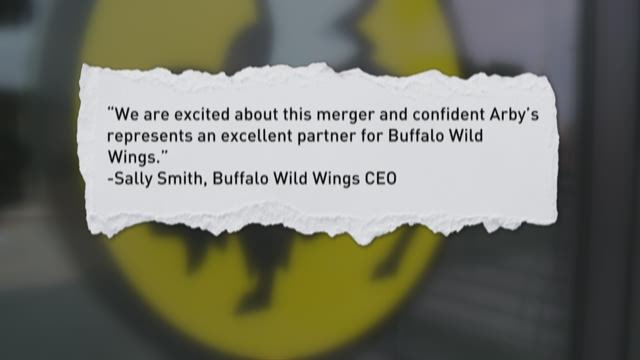 MINNEAPOLIS - Minnesota-based Buffalo Wild Wings (BWW) announced Tuesday that the company has entered into a proposed merger that would lead to it being acquired by Arby's Restaurant Group.

In a release issued to the media, Buffalo Wild Wings announced that the deal, valued at approximately $2.9 billion, would have Arby's take control of BWW for $157 per share in cash, and also take on BWW's debt.

“We are excited about this merger and confident Arby’s represents an excellent partner for Buffalo Wild Wings,” said Sally Smith, CEO of Buffalo Wild Wings. “This transaction provides compelling value to our shareholders and is a testament to the hard work and efforts of our talented Team Members and franchisees. We are confident that the strength of our two industry-leading brands, under the sponsorship of Roark Capital – an experienced restaurant and food service investor – will enable us to capitalize on significant growth opportunities in the years ahead.”

The transaction is expected to close during the first quarter of 2018, subject to the approval of BWW shareholders and the satisfaction of customary closing conditions and the approval of regulators.

Following the close of the transaction, BWW will be a privately-held subsidiary of Arby’s Restaurant Group, Inc., and will continue to be operated as an independent brand.

That sounds nice, but what does it really mean?

"You know, I think for Buffalo Wild Wings it's a great way to proceed. What happened earlier this year was a joke," said Dale Kurschner of Twin Cities Business Magazine.

This spring, activist investor Marcato Capital won three seats on B-Dubs board and pushed for major changes. Days later, Smith, who was promoted to CEO in the mid-90's and helped the restaurant grow to over 1,200 locations in 10 countries, announced she's retiring.

"This was the most talented restaurant team in the United States, one of the very most talented," said Kurschner. "It's like seeing The Beatles break up. How many jobs we keep here, we don't know yet."

About 400 people work at Buffalo Wild Wings' corporate office in Minneapolis. Kurschner is optimistic that won't change much. And, he says, getting out of Marcato Capital's hands and into Arby's is a good thing.

"This company that's acquiring it has a really good track record of taking brands like a Hardee's and bringing them back from the dead. And, this one isn't as bad as that one was," Kurschner added.