Can an electric bike replace your car?

Imagine zooming down streets at 20 mph and barely pedaling. That's the allure of E-Bikes, but can they truly replace your car? 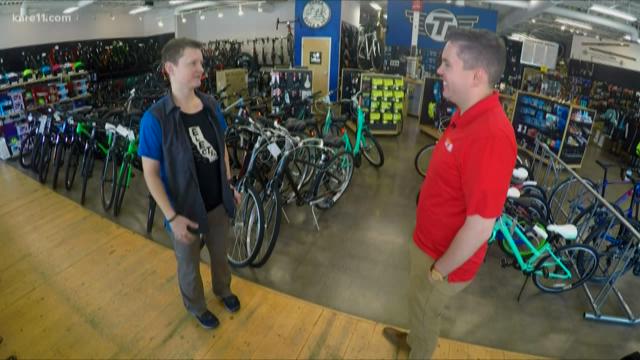 They’re out there in plain sight, but you’d never know they were there.

Electric bikes, or E-Bikes as they’re known on the streets, look just like any other bike except for one small difference, a motor.

“You can get going pretty fast, up to 20 miles an hour,” Tonka Cycle and Ski shop manager Emily Johanneck says.

The motor is powered by a small battery that can take you up to 100 miles with one charge.

“It all depends on the terrain and how fast you’re going,” Johanneck says.

To activate the motor all you have to do is pedal.

With each step, the motor will give you an extra boost, depending on which speed you’re on.

“When you stop pedaling the motor stops. It’s known as ‘pedal assist.’ There’s no throttle. It won’t go unless you’re going,” Johanneck explains.

E-Bikes are the latest craze in Europe, where a recent study showed one in four Europeans is willing to give up their cars for an E-Bike.

Here in the U.S. they’ve been around for years, Johanneck says, but they didn’t become popular until recently.

E-Bikes are popular with older bikers who want a workout without pedaling as hard.

Johanneck says they’re great for the elderly or people with disabilities who need a little extra boost to get up hills and to go through tough terrain.

E-Bikes are also popular among commuters who see them as a cheap way to get to work that isn’t as sweaty as a normal bike.

“You can control how much work you put in,” Johanneck says. "It’s nice to not have to take a shower when you get to work, that's never convenient."

But they're not exactly cheap.

"It’s an investment for sure,” Johanneck says.

“It certainly can save you money over a car, because you don't have to pay for insurance or buy gas."

With gas alone it would take a while to pay off the bike.

At 25-miles per gallon, and a 10-mile commute both ways, it would take you two to three years to break even.

But if you get rid of your car altogether, AAA says you can save about $9,500 a year on average.

With that amount of savings, you could pay off an E-Bike in two to three months.

"Although what I'm seeing is most people who have an e-bike also have a car," Johanneck says.

So, it's not saving people a ton of money just yet.

Johanneck says most customers are simply in it for the fun right now.

"I think everybody should test ride one because they are really fun."