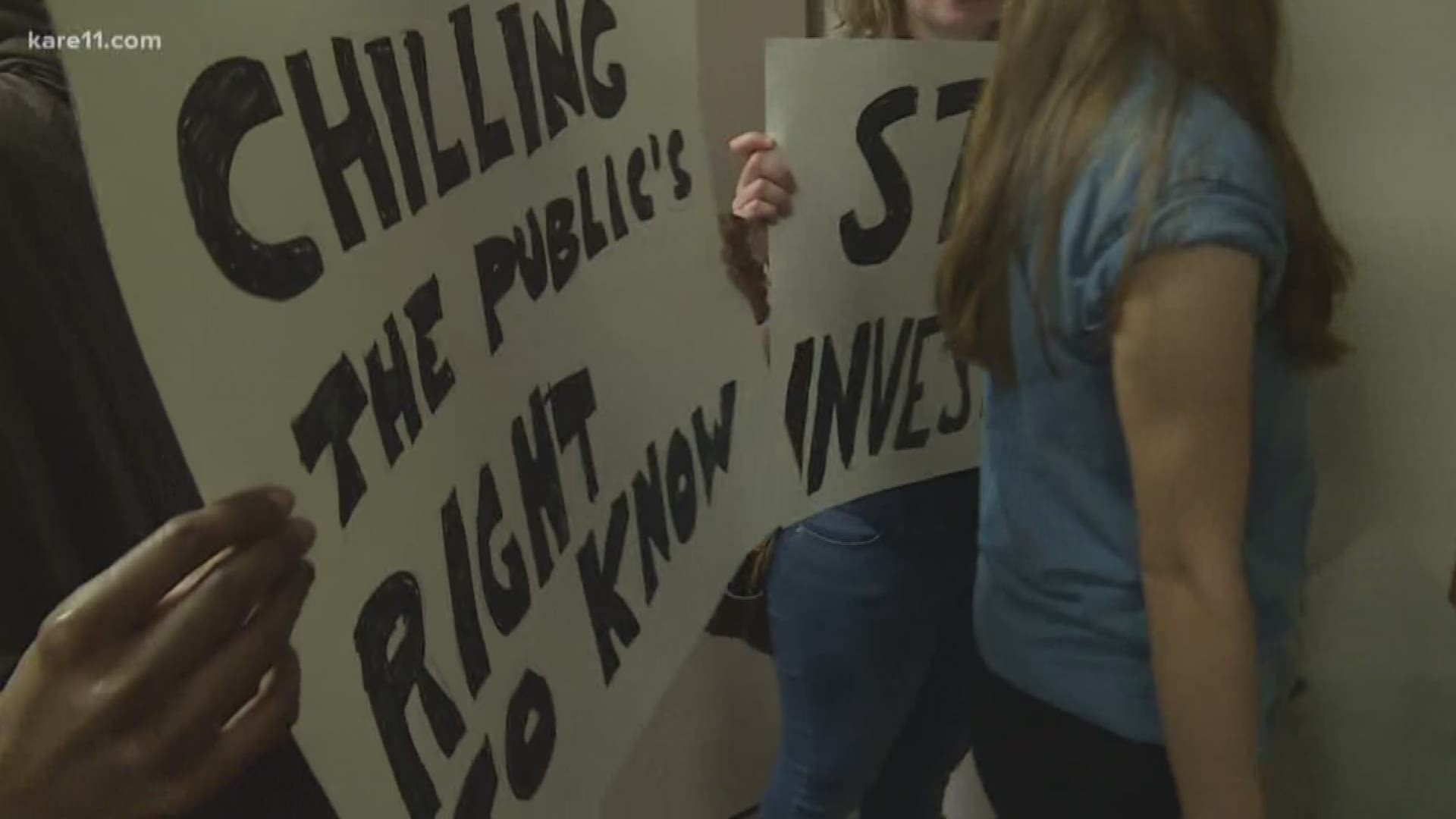 MINNEAPOLIS -- A coalition of 1st Amendment advocates have called on the City of Minneapolis to drop the investigation into the leak of a report to the Minneapolis Star Tribune.

A group of reporters and press freedom proponents joined the ACLU at a news conference Thursday at City Hall, and then delivered copies of petitions signed by reporters to members of the City Council, Mayor Jacob Frey and City Clerk Casey Carl.

"This issue is about three things: the public’s right to know, the right of journalists to seek truth and report it, and government transparency," said Joe Spear, the editor of the Mankato Free Press newspaper and the president of the Minnesota Society of Professional Journalists.

The controversy centers on an investigation by the Minneapolis Police Civilian Review Board into the use of the drug ketamine by paramedics to sedate people during arrests, at the request of officers.

The City in July produced a public report on pre-hospital sedation, showed that the practice has spiked in the past few years. Some of those who receive those injections must be intubated and hospitalized due to a reaction to the drug.

The public didn't have to wait for the report to come out, however, because a draft version was leaked to the Minneapolis Star Tribune, which published the story June 15. The report created a wave of outrage throughout the community and made national headlines.

This week the city directed NeuVest, a law firm that already holds a two-year contract with the city for legal work, to launch a probe into the leak. The firm has been authorized to bill the city $275 per hour, up to $100,000, over that two-year period.

Jane Kirtley, the former head of the Reporters Committee for Freedom of the Press, asserted the City's decision to launch an investigation is prompted by embarrassment, and is mostly likely designed to discourage future whistleblowers.

"It’s really all about the eternal question of whether the government can keep its secrets," Kirtley remarked. "And I think the answer is it can if it can, but once the information is out, conducting an investigation like this serves only to chill public oversight and information."

City Clerk Casey Carl said it's inaccurate to call this a "leak investigation" because, as he sees it, it's a "data breach investigation" -- an effort to learn if any nonpublic data was shared with a third party.

He said, as city clerk, it's part of his job to make sure that city employees, and City Council members conform to the Minnesota Data Practices Act, the set of state laws that governs which government information can be shared with the public and media.

Carl said if private information is released, the city is required to notify those persons that their privacy has been breached. That could range from private personnel information about police officers and paramedics, to medical information about those who received injections.

Teresa Nelson, the legal director for ACLU of Minnesota, said the fact the Star Tribune story had immediate impact proves that the public had the right to know about what was happening with ketamine.

"Individuals who come across evidence of government malfeasance should not fear retaliation for exposing that wrongdoing," Nelson told reporters.

"And when it was publicized it resulted in almost immediate permanent change in policy by MPD, to address the issue."

Nelson, Kirtley and Spear are founding members of the newly formed Committee to Defend the First Amendment. Open government champions Matt Ehling and Don Gemberling, the retired director of the state Data Practices Office, are also part of the group.

Carl, in an opinion piece published by the Star Tribune, said he believes the Minnesota Data Practices Act actually requires him to investigate data breaches.

It's unknown if any of the information leaked to the Star Tribune is private data. The final public report was devoid of such private information. But Carl suggested that the newspaper may have received supporting documents that are more revealing.

Hennepin Healthcare initially reacted by defending the use of the drug, pointing out the use of the anesthetic by the hospital's paramedics are still extremely rare, as a percentage of all ambulance calls and emergencies involving police.

But as the outrage grew, HCMC and other ambulance services that work alongside Minneapolis police officers promised a review of the practice. HCMC also suspended a long-running study on patients who received ketamine.

Disclosure: This reporter was among at least 10 KARE journalists who signed the petition calling for the probe to be ended.