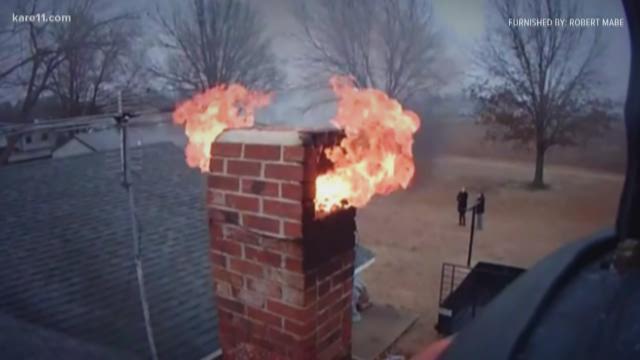 SPRING LAKE PARK, Minn. — If you burn wood in a fireplace, put yourself in the shoes of Robert Mabe.

In a widely viewed YouTube video, the Truman, Arkansas firefighter climbs a ladder and confronts flames erupting from the top of a chimney.

Three times in three years, the Trumann Fire Department had responded to a chimney fire at the same house.

“The homeowners there chose not to maintain the flue and the chimney at all,” Mabe said Monday.  “It took three years of us going there, and those folks were darn lucky they didn’t lose their house over something as senseless as not maintaining their flue.”

If you burn wood, the Chimney Safety Institute of America recommends a chimney inspection at least once a year.

Even if you use your fireplace infrequently, the institute says an inspection can assure no animal nests or deterioration have made your chimney unsafe.

Chimney sweeps use brushes to sweep away flammable creosote from the inside of flues.

RELATED: Winter Weather Awareness Week: What you need to know

Twin Cities company Jack Pixley Sweeps employs cameras to inspect the inside of flues for creosote buildup and other types of damage.

“If you have a chimney fire or something goes wrong with it, the flue tile can crack,” Nick Richardson, a co-owner at Pixley Sweeps said.  Cracks increase the fire risk, meaning cracked tiles should be replaced.

Mabe says it just makes sense. “It’s like any other piece of HVAC equipment in your home.  You should do preventative maintenance and you should have licensed people come in and inspect it at least once a year.”