The Council on American-Islamic Relations delivered a 251,000 signature petition calling for Bob Kroll to resign. 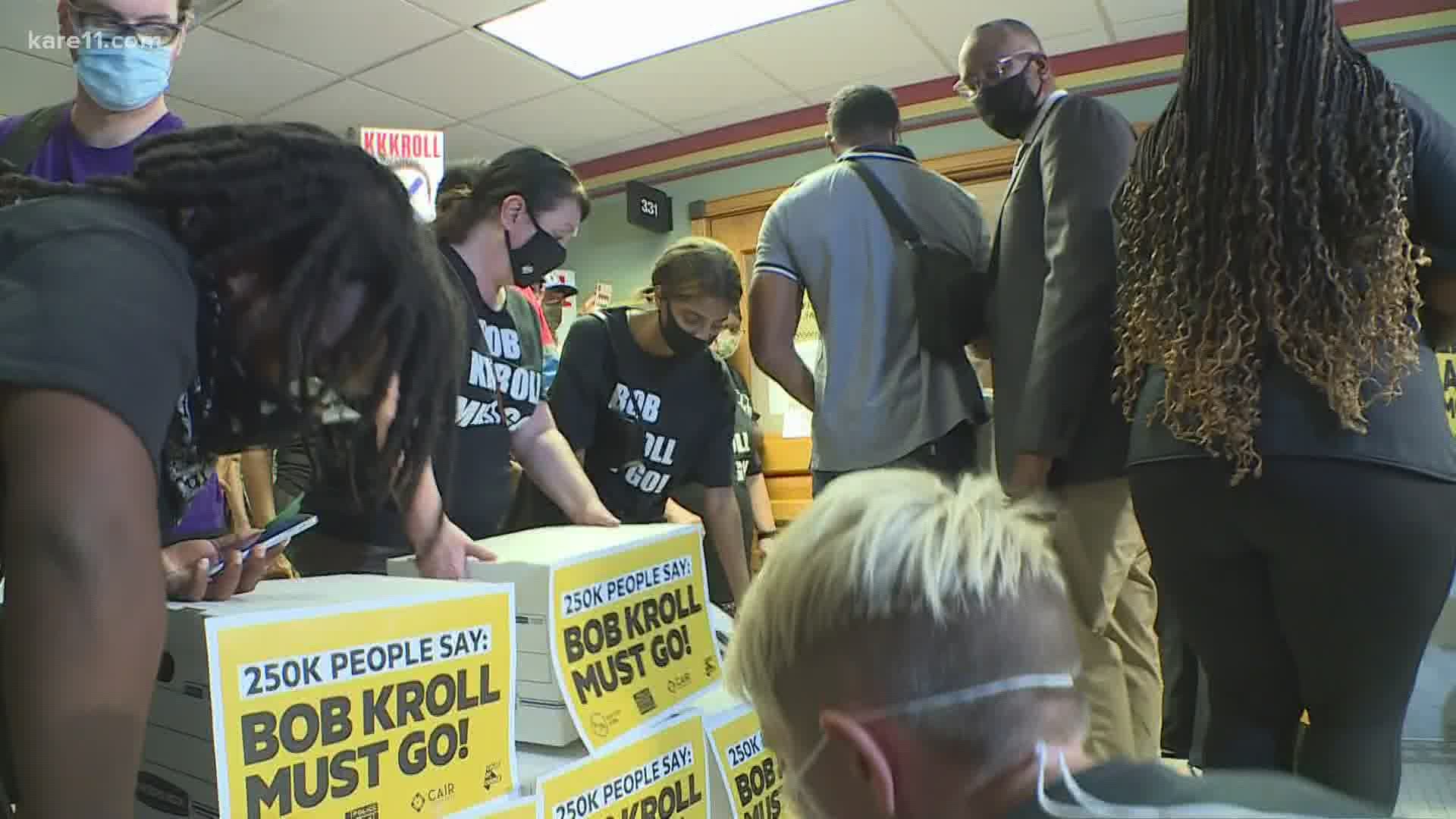 MINNEAPOLIS — The Minnesota chapter of the Council on American-Islamic Relations (CAIR-MN) and a coalition of other community groups delivered a 251,000 signature petition calling for the firing of Minneapolis Police Federation President Bob Kroll to Minneapolis city leaders Friday.

According to a press release, the signatures were collected by Color Of Change, and by Police Unions Exposed via MoveOn’s petition platform.

"We thought the killing of George Floyd-- which we saw the entire country, the entire world react so strong to, in rejecting this type of behavior, this type of tactics -- we thought Bob Kroll's days would be over by now. But the reality is the city of Minneapolis, the leaders of the city of Minneapolis, refuse to act and fire Bob Kroll," said Jaylani Hussein, executive director of the Minnesota chapter of CAIR.

"Enough is enough," said civil rights attorney Nekima Levy-Armstrong. "We are calling for a paradigm shift in the city of Minneapolis in terms of the future of public safety, in terms of how officers are hired. In terms of who even remains on the force."

Among those who spoke was Bettie Smith, the mother of Quincy Smith, a 24-year-old Minneapolis DJ who died of cardiac arrest after being tased multiple times by police during an arrest in 2008. At the time of his death Quincy Smith had a pending police brutality complaint against the MPD stemming from a previous incident.

Mrs. Smith said her son's reputation was smeared by the police union, and accused Lt. Kroll of disparaging those who die in police encounters -- bringing up their drug use and past criminal histories -- to erode public sympathy for them.

"There's not a person in this room, in this nation, in this world who has not done something wrong, but that does not give the police the right to kill you," Smith declared.

"It does not give Bob Kroll the right to, 'It's okay. He had a counterfeit bill'! It's okay, his girlfriend said he did something to her'!"

The union released a statement responding to the petition delivery:

“The Police Officers Federation of Minneapolis has a mission to support its officers as public city employees and to ensure they are treated fairly by political leaders as they handle budget and policy decisions," the statement said. "Like other unions, it exists to advocate for its members and as a Board we take that role very seriously."

After the death of George Floyd on Memorial Day, Arradondo pulled out of contract negotiations with the union, although the Star Tribune reports that negotiations are still happening just without the chief.

In a statement to KARE 11, Lt. Kroll said "I have been elected by my members overwhelming, most times unopposed for more than 24 years. My current term ends in May of 2022. The city cannot fire people for being good at their job. Placing any blame on The Police Federation for the current problems in the city is just one of the many false narratives these groups thrive on."

Less than one week ago, a protest was held outside of Kroll's home in Hugo.