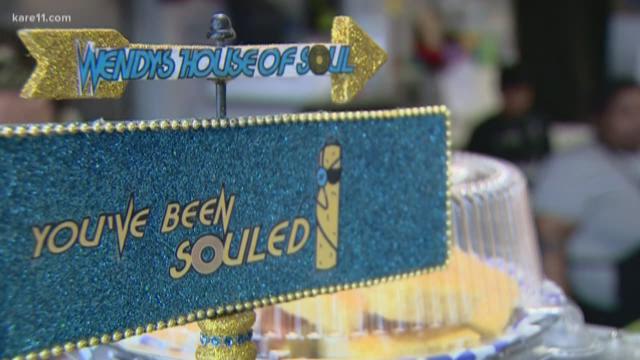 MINNEAPOLIS — Wendy Puckett is grateful to be back behind the counter of Wendy's House of Soul restaurant at Broadway and Emerson in North Minneapolis.

Late last year Puckett wasn't sure what would happen to her business after a pellet gun shooting sent her to the hospital and forced her to close down.

"It was November 22nd at 9:07 p.m.," Puckett said. "I had just walked out of work. I heard some laughter, a car and some chatter. I turned and then got hit in the nose with a pellet gun."

The pellet didn't stop there. Puckett says it shattered inside her face and nearly took her eye.

"I don't even try to think about it," she said. "Because it causes more anxiety than I have to deal with already."

Late last week, her anxiety began to ease a bit when she learned Minneapolis police arrested two adults and two juveniles in connection to more than a dozen pellet gun shootings that shattered windows across the north metro area.

"It happened in Northeast Minneapolis, North Minneapolis all the way to Brooklyn Center," said Wendy's sister, Heather Warfield. "I don't think they understand how much they impacted people."

Wendy is now waiting to hear whether the suspects will be charged in connection to her shooting.

"It would be a nice to put a face with it. I don't know if that's going to make me feel any better," she said. "After that, I don't know what justice looks like for something like this."

In the meantime, customers are grateful to have her back in business.

"It's amazing," said Marie Williams. "It's the best food over north."

"She has a heart that is not only for people, but to serve," said Mark Lewis. "Now that she's back, it's like more than just a gift."

Wendy says it's a gift for her as well.

"I still get overwhelmed because you never know how much people care about you," Puckett said. "I don't think there's a word on earth that even can describe my gratefulness."