The criminal charges against the St. Anthony officer who shot and killed Philando Castile convey a frantic scene that ended with gunfire, which are now said to be an unjustified use of deadly force. 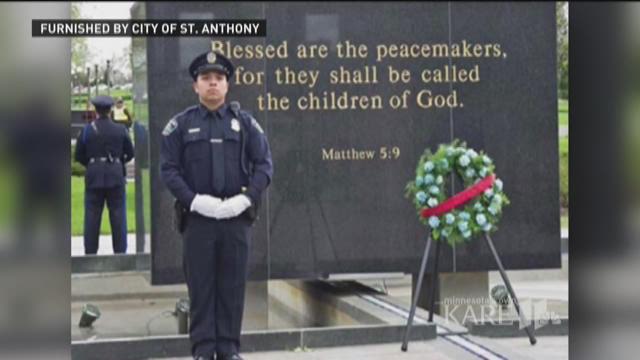 ST. PAUL, Minn. - The criminal charges against the St. Anthony officer who shot and killed Philando Castile convey a frantic scene that ended with gunfire, which are now said to be an unjustified use of deadly force.

On Wednesday, Ramsey County Attorney John Choi charged St. Anthony Police Officer Jeronimo Yanez with second-degree manslaughter and two counts of dangerous intentional discharge of a firearm in the July 6 incident, saying it is his belief that Yanez never should have fired his weapon.

The facts of the case are outlined in the criminal complaint, which starts with a robbery of a Super USA convenience store that took place on July 2. Video surveillance of that robbery showed the suspects were two black men, both with dreadlocks, glasses, baseball hats and firearms. Officer Yanez was one of the responding officers in that case.

Four days later, on July 6, just after 9 p.m., Yanez was on patrol near Larpenteur Avenue when he spotted Philando Castile's vehicle driving east, near the scene of the Super USA that was robbed days before. Castile was accompanied by his girlfriend Diamond Reynolds, who was in the front passenger seat, and Reynold's 4-year-old daughter, who was in a child seat in the back.

Yanez radioed that he was going to pull Castile over to fellow St. Anthony Police Officer Joseph Kauser, who was on patrol nearby. Yanez told Kauser that he suspected Castile was a suspect in the robbery saying that the occupants "just look like the people that were involved."

Yanez further stated that the "driver looks more like one of our suspects just because of the wide-set nose." He said he had reason to pull the car over because it had a broken tail light.

At 9:02 p.m., Yanez ran Castile's license plate. The results came back to show Castile was the owner of the vehicle, it was not listed as stolen and there were no warrants out for his arrest. At 9:04 p.m. Yanez activated his squad lights and Castile immediately pulled his vehicle over.

Scenes from the night of the fatal police shooting of 32-year-old Philando Castile.

The charges note that everything happened quickly after that -- a minute later, Yanez had already fired seven times at Castile, killing him.

Here is a timeline of what happened:

9:05 p.m.: Castile's vehicle comes to a complete stop on the eastbound side of Larpenteur, near Fry Street.

15 seconds later: Yanez approaches the driver's side of Castile's vehicle, placing his right hand on the right side of his duty belt, near his gun. Castile is buckled in his seatbelt.

22 seconds: Yanez leans down, exchanges greetings with Castile and informs him of the broken tail light.

33 seconds: Officer Kauser approaches the vehicle, standing on the sidewalk on the passenger side of Castile's vehicle.

38 seconds: Yanez asks for Castile's license and proof of insurance.

52 seconds: Castile calmly tells Yanez: "Sir, I have to tell you that I do have a firearm on me." Before Castile can complete the sentence, Yanez interrupts him and replies, "OK," while placing his right hand on the holster of his gun.

55 seconds: Yanez says, "OK, don't reach for it then." Castile responds and said, "I'm ... I'm .. (inaudible) reaching" before being interrupted by Yanez again who says, "Don't pull it out." Castile responds, "I'm not pulling it out," and Reynolds echoes his statement saying, "He's not pulling it out." Yanez screams, "Don't pull it out" and quickly pulls his own gun while reaching inside the driver's side window with his left hand. Yanez removes his left arm from the car, then fires seven shots at Castile in rapid succession.

Kauser tells authorities that during the incident, he never saw Castile touch or remove his gun.

After the shooting, Reynolds yells, "You just killed my boyfriend!"

Castile then moans and utters his final words, "I wasn't reaching for it."

Reynolds loudly says, "He wasn't reaching for it," but before she could finish her sentence, Yanez screamed again, "Don't pull it out!"

Reynolds responds that he wasn't and Yanez can be heard screaming, "Don't move! F---!"

At this point, Reynolds begins live streaming the incident on Facebook, while Yanez still has his gun drawn and pointed at Castile.

The complaint states assisting officers arrived a short time later, unbuckled and removed Castile from the vehicle and performed CPR on him, until paramedics arrived and took over.

When officers removed Castile from the vehicle, they saw and removed a .40 caliber semiautomatic handgun from deep inside his front pocket. The gun contained a loaded magazine but it did not have a round in the chamber.

Inside Castile's wallet, authorities found his driver's license and his permit to carry.

Yanez went on to say he didn't know where the gun was, adding, "he didn't tell me where the f---ing gun was and then it was just getting hinky, he gave, he was just staring straight ahead and ... I was getting f---ing nervous ..."

In an interview with the BCA on July 7, Yanez told investigators he was scared and in fear for his life and the life of his partner. He said Castile wasn't following his directions and that it was dark in the vehicle, making it difficult for him to see where the gun was. In that interview, he told investigators Castile was pulling his gun out with his right hand and that "I thought I was gonna die."

Kauser was also interviewed on July 7 and told investigators he never saw Yanez's gun until he started shooting. He said Yanez gave no warning to Kauser that Castile had a gun. When asked if he was surprised when Yanez fired, Kauser replied, "Absolutely."

The charges note the Super USA robbery remains unsolved but Castile was ruled out as a suspect.

The complaint states the investigation reveals Yanez's use of deadly force in the incident was "not necessary, was objectively unreasonable and was inconsistent with generally accepted police practices." It also states that firing seven shots in close proximity to Reynolds and her daughter endangered their safety.