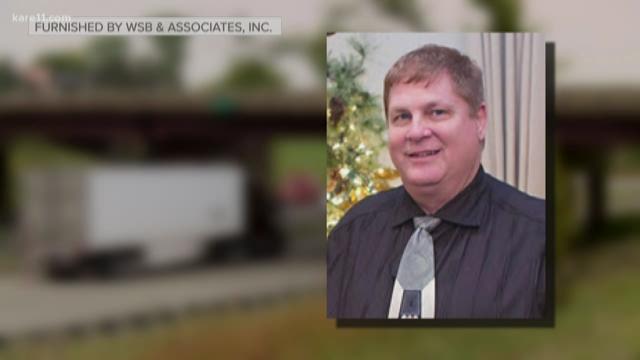 ROGERS, Minn. - A 59-year-old construction worker was killed and another worker injured Tuesday afternoon after a crash on Interstate 94 in Rogers.

According to the Minnesota State Patrol, a Ford F150 with a trailer was headed east on I-94, approaching County Road 81, when it slowed for traffic and was rear-ended by a semi truck around 2 p.m. Tuesday.

Two men were struck by a Ford pickup after it was rear ended by a semi in a construction zone. One of those men was killed. (MnDOT)

"They're focusing on what they're doing. And maybe he caught a glimpse, but honestly everything happens so fast. There were other witnesses out there who heard screeching tires, screams and they responded to help and he was severely injured," said Tiffani Nielson, of the Minnesota State Patrol.

The two men were working for a company called WSB in the right lane, which was closed down to traffic.

Hedquist's death was the 13th this year inside a work zone resulting from a crash, the most in Minnesota in 11 years.

When asked what might be leading to the rise, Nielsen said, "I think honestly, people are distracted by their phones. People are not paying attention. In construction zones, there is no barrier. So if you're on your phone and you enter a zone where people are working, if you even drift over that fog line a little split second, you could interfere with a worker out there."

Nielsen said charges are likely against the driver of the box truck, although the investigation will take about six months.

A GoFundMe page has been set up to support Hedquist's family.