The Minneapolis City Council will indeed move forward with a vote on Friday to submit the long-debated 2040 plan. 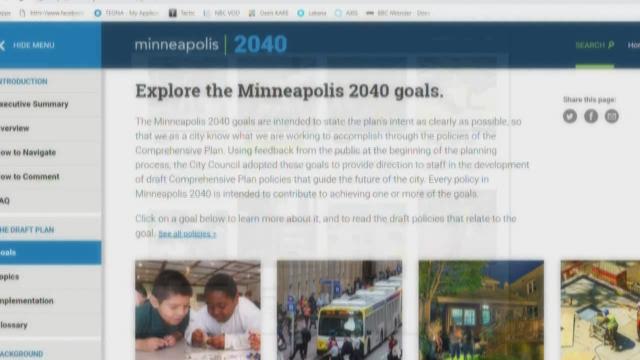 MINNEAPOLIS – The Minneapolis City Council plans to move forward on Friday with a vote to authorize the 2040 Comprehensive Plan for submission to the Metropolitan Council, according to a spokesperson for the city attorney’s office.

The vote had been in doubt after Judge Joseph Klein urged the council on Thursday to delay it until he could issue a decision on a lawsuit brought forth by three urban planning and environmental groups. In their legal challenge, these groups argue the 2040 plan lacks a full environmental review and that the impact on air, water and bird patterns is impossible to gauge without further research.

After the temporary restraining order’s denial, a city spokesperson and a member of the Minneapolis City Council both confirmed the vote will take place on Friday as planned.

Jack Perry, an attorney for the plaintiffs, said the legal challenge will continue and that the judge’s denial of a temporary restraining order does not spell the end of the fight.

In the decision released on Thursday, Judge Klein wrote that a council vote to authorize submission to the Met Council would not cause “immediate changes” to any zoning or city projects. The judge pointed out that the Met Council would still have at least four months to review the city’s plan and could request modifications.

“Whether the Met Council will request modifications from the City is not known,” the judge wrote. “If modifications are requested, it is also unknown how these modifications might affect Plaintiffs’ environmental concerns.”

The 2040 Comprehensive Plan, which would guide city policy and decision-making over the next few decades, has been hotly-debated over the past several months. Many proponents have argued that it will increase racial equity, improve quality of life for all socioeconomic groups and provide more affordable housing opportunities by allowing apartment buildings in nearly every neighborhood.

The zoning aspect of Minneapolis 2040 is among the most controversial parts of the plan.

Nicole Salica, a member of "Neighbors for More Neighbors" that supports passage of the plan, said increased housing density in the city will drastically expand options for people looking to rent.

"We see that there's a huge housing shortage. We see that vacancy rates are incredibly low," Salica said. "One of the best ways to impact that is to increase the amount of housing that exists, that we can have. When we allow more housing to exist in the city, it makes conditions better for everybody."

Opponents, however, have argued the plan could backfire. By rezoning most of the city to allow for triplexes in most neighborhoods, some fear it would give developers free reign to buy up properties in residential areas and then demolish them in favor of new apartment buildings.

The groups suing over the 2040 Comprehensive Plan argue that denser housing will have adverse environmental effects, including storm water drainage and increased vehicle traffic.