Sheriff's officials say an 11-year-old boy is in custody after stealing a cement truck from a contractor and leading officers on a chase in Dodge County. 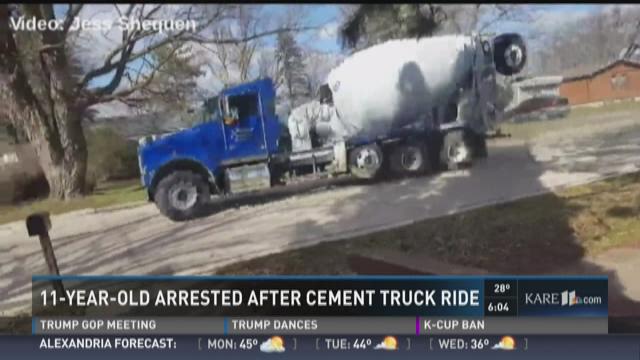 DODGE CENTER, Minn. - Sheriff's officials say an 11-year-old boy is in custody after stealing a cement truck from a contractor and leading officers on a chase in Dodge County.

Authorities say the chase started about 3 p.m. Sunday in Dodge Center after the juvenile was pulled over on Highway 14 for speeding, and then took off.

A State Patrol helicopter tracked the truck by air and officers followed on the ground where speeds reached 65 to 70 mph. Two squad cars were damaged during the pursuit.

The boy eventually navigated his way onto the streets of Dodge Center, which residents say is his home town. Witnesses say the cement truck sped through the side streets for an extended period of time.

"I betcha he drove around town 6 or 7 different times," said Dodge Center resident Troy Flatness, who witnessed the chase. "He was smiling, hooting and hollering...he was having a good time."

The chase went on for about an hour before the juvenile pulled over on a dead-end street. He jumped out of the cement truck and tried to run, but authorities were able to catch and arrest him.

"Everybody was out with their cameras," said Flatness. "It was like a parade and I had no idea what was going on."

Authorities are holding the boy in juvenile detention pending charges.