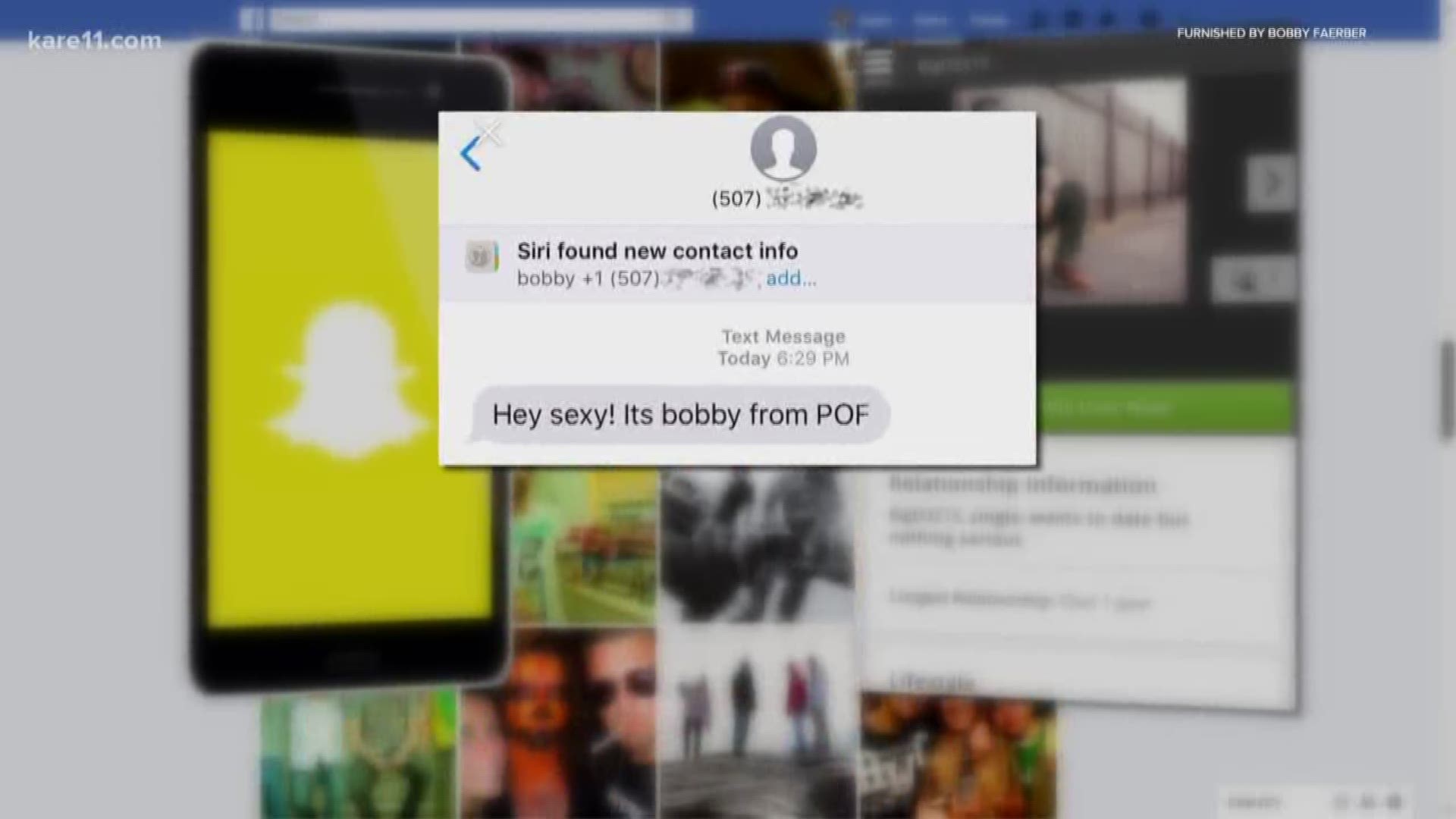 NEW ULM, Minn. — Anyone who has spent time on social media sites has likely seen fake profiles. Profiles set up with photographs of a real person, but operated by a different person altogether.

In the last few years, the act of using a fake social media profile for nefarious reasons has come to be known as "catfishing." But catfish are rarely held accountable for their actions.

A rare case in Brown County ended in a criminal conviction, thanks to catfishing victim Bobby Faerber, who refused to let someone posing at him destroy his reputation.

"You know, your image is everything, especially when you’re branding yourself and your business," said Faerber.

Faerber is a professional wedding photographer, so not only are the pictures on his own, real social media profiles very good, but his reputation as a local business owner was also at stake.

And Gullickson used the fake profiles to solicit nude photographs from women he chatted with online.

Cases like this hardly ever end up in court. Unlike some states, Minnesota does not have an anti-catfishing law.

Faerber and Brown County attorney Chuck Hanson would like the legislature to create a law specifically aimed at stopping catfishing.

MORE NEWS: A laundry list of new MN laws that kick in Aug. 1

"As technology advances, it’s like the legislature is a little slow to catch up. And they don’t have laws in the books that are specifically for this crime, so you have to kind of see what fits," Hanson said. "When you have to do sort of gymnastics to figure out what's going to fit – you shouldn't have to do that. There should be a law on the books that says this is illegal and this is the punishment."

After someone tipped off Faerber about the phony account, he did much of the detective work himself. He and a female friend contacted the phony account, and Faerber said he was angered by the things Gullickson wrote to them while posing as Faerber.

"It's just super frustrating, seeing the things that he was saying to a potential person that he doesn't know," Faerber said.

Faerber turned over a USB drive full of screenshots and other evidence to New Ulm Police, who obtained search warrants and gathered enough proof that Gullickson is the culprit.

Often in catfishing cases, the offender could be located very far away. But the fact Gullickson was local made it more serious to Faerber.

To this day, Faerber said he deals with paranoia that people in the community and potential photography customers think he was the one sending the inappropriate messages online.

Inside the courtroom, Judge Robert Docherty pointed out that although Gullickson has to live with reports of his crime remaining online, that is a consequence of his own actions.

"Mr. Faerber did nothing to warrant what happened to him," Judge Docherty said.

Docherty handed down two years of probation, and told Gullickson he cannot create any social media or dating profiles during that time.

Gullickson was very emotional, and gave a tearful apology in court.

"When these actions occurred, I felt like I was in a very dark place. I felt as if no one wanted me. And it drew me to be envious of somebody else’s life," Gullickson said. "I was so focused on being somebody else, and in the midst of it, I became a person I never wanted to be. "

Gullickson went on to say, "I can’t begin to express to the victim how truly sorry I am for my actions. I just want people to see I'm a good person who made a bad choice, and I am truly sorry for that."

But Faerber's goal in pressing charges was not retribution, but rather restoring his reputation.

"It takes a lifetime essentially to create the brand he has, considering what he does, and it takes moments to essentially tear that apart," Assistant County Attorney Dan Kalk said in court.

"I don’t like being up here and kind of putting my foot on someone’s back," Faerber said during his victim impact statement. "I feel like you could relate, anybody could relate in this courtroom. To me, the most important thing is to let it be known that it wasn’t me."